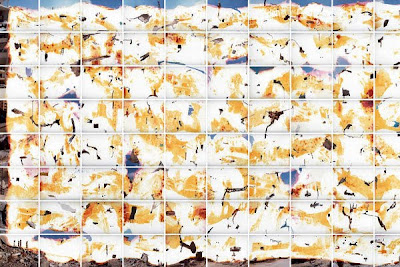 Curtis Mann. After the Dust, Second View (Beirut) (2009).  Synthetic polymer varnish on bleached chromogenic print. 65x153 inches. This is the image provided on the Whitney website, which says it's a detail. Most of it is there, but it's cut off on the right side.

The bare bones description above fails to mention the painstaking processes involved in the creation of this monumental work. The reproduction also fails to convey not only the immense scale of the work, which is wall-sized, but the content of the image. Of course, this is why it is essential to view actual art works and not reproductions, which at best act as a visual reminder of the work one experiences in person.

I enjoyed much of the work in this year's biennial, and if I have time I shall share other examples. For now this one is my favorite.

Mann assembled this singular and powerful image from at least 80 smaller images taken in Beirut. Each image was manipulated not only with bleach, but by physically distorting the emulsion's surface. What remains is one of the best expressions of what I can only imagine the aftermath of an explosion in a public space must be like. The image has been obliterated, as the subject of the image seems to have been.