There was a time in the U.S. when community happened because people lived in proximity to one another. In some cultures, this still is the case. But here and now we are less likely to find a supportive, cohesive community of like-minded folks in a single geographic location, like our neighborhoods, for instance. Community, as often as not, is the result of networking. Sometimes this happens online. In Milwaukee, for those of us in the creative arts, community assumed an identity ten years ago. That identity, of course, is MARN: the Milwaukee Artists Resource Network.

MARN celebrated its anniversary last night with a party that doubled as the crowning event of its first-ever fundraising Treasure Hunt. As a relative newcomer, I can’t comment on the last 10 years, but, hey, last night MARN threw a good party! Many of the artists who had contributed work for the Treasure Hunt were on hand and it was fun to meet some of them. (My one regret is not to have met them all!) It was great to see all the art together and realize the tremendous amount of work that went into this entire project. It was even better to see that some of the art was missing and therefore sold for the benefit of the organization.

The music provided a nice background, the food was delicious, and Shelby Keefe (pictured below) spent the whole time painting!

My thanks go out to Melissa Musante, the board of MARN, and the many volunteers who made this event possible and whose ongoing efforts continue to invigorate the community of artists in Milwaukee. 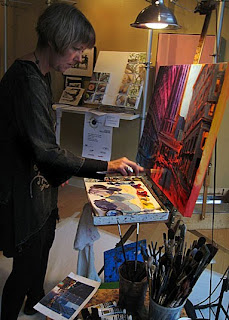