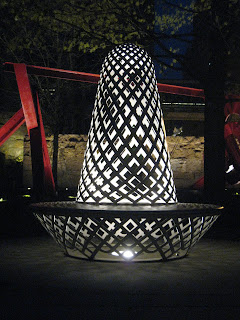 Untitled by Martin Puryear
at the City Garden, St. Louis

Having lived in Milwaukee for a long time, I've seen too many instances of public art that is either ridiculed or rejected. And so it was a pleasure to visit St. Louis where, in a short few days, I discovered a trove of public art. Two troves in particular: a large suburban sculpture park (Laumeier) and a three block long stretch of the downtown central mall called the City Garden. I had the great fortune to visit each several times.
Both are free and open to the public. Both include sculptures that range from figurative to abstract, complex to minimal.
I would have been delighted with the art in any case. What struck me most about my visits, however, was that so many other people were there spending time with the sculptures. I'm so used to being the only person paying any attention to public sculpture, but while I was there I never saw either place deserted. People clearly enjoyed not only the public space but the art. Many had cell phones and serious cameras out, taking shots of their friends and family in front of (sometimes inside) the sculptures.
At the City Garden the usual strictures against touching the art are more relaxed (there are warnings about safety rather than prohibitions) and it was wonderful to see children climbing the di Suvero as well as Tom Claassen's more predictably approachable white rabbits.
Kids enjoyed climbing inside the monumental head of "Eros Bound" by Igor Mitoraj and looking out through the eyes. They also splashed through the gently cascading water in front of it. At the City Garden in St. Louis I found a public space for public art that the public enjoys!
What's wrong with Milwaukee? Why couldn't we take a block or two of the still vacant Park East Freeway and create our own sculpture park? Maybe right next to the Bradley Center, where there are plenty of visitors; or as an extension of the Riverwalk.
Although the St. Louis region is larger, the city of Milwaukee is almost twice the size of St. Louis in population. There's more to that story--too much for one post. 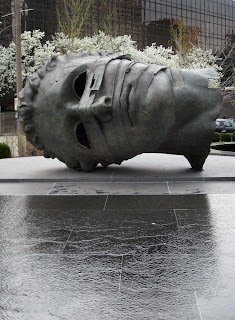 Eros Bound, Igor Mitoraj
at the City Garden, St. Louis
Posted by eddee at 4:34 AM