Gaudí in Barcelona: Spectacular and unique


Some people, I know, have heard of Antoni Gaudí. Many have not, however. And unless you've studied architecture or Barcelona or something related, it's hard to come to grips with how exceptional his designs are. I taught architecture for many years and thought I knew what to expect. I certainly was looking forward to my first visit to Barcelona with great deal of anticipation. But even so, I was not adequately prepared...


We didn't beat around the bush. We went to see Gaudí's unfinished masterpiece first thing in the morning on our first day in Barcelona. La Sagrada Familia is a cathedral and having seen large gothic cathedrals its size was not unexpected. And I was familiar with his unique organic style from photographs. But the scale of it all and the sheer beauty was breathtaking. He achieved a monumental scale without the bulky encrustments of flying buttresses that make the exteriors of gothic cathedrals seem impenetrable. The stone appears to float upward rather than to press down on the earth. The tall spires remind me of beach castles made by dripping wet sand. 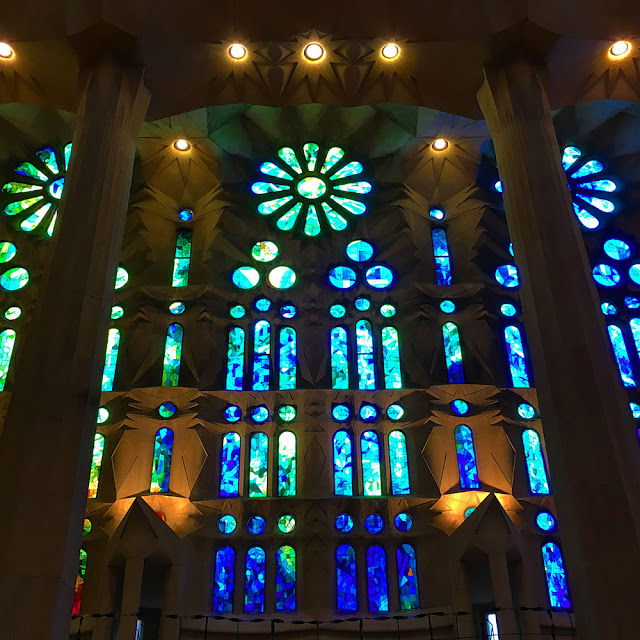 The sense of floating was even more pronounced on the interior. The abstract stained glass cast uneven colors into the vast nave, one side warm reds, oranges and yellows, the other cool deep blues, aquas and pale greens. 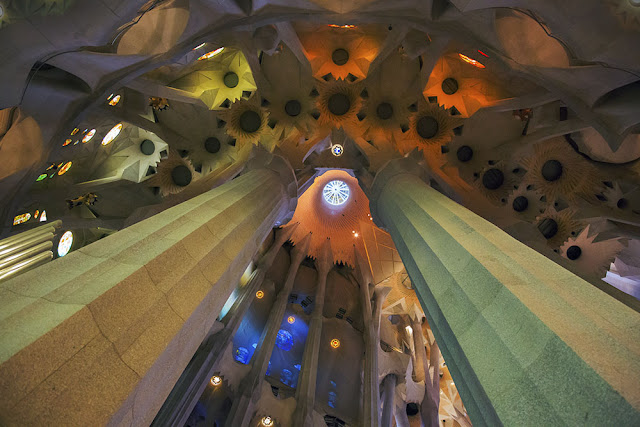 The vault appeared to be supported on the trunks of great trees that led the eye upwards towards an eerie configuration of circular forms. I felt as though I was being inspected by a gargantuan spider with multi-faceted eyes that hovered overhead in wait.

It was a cold, blustery weekday morning and yet the entire interior was full of people before we left. We learned that this building, which had been abandoned for decades after Gaudí's untimely death in 1926, is now the single most popular tourist attraction in Spain. But it is hardly the only one... 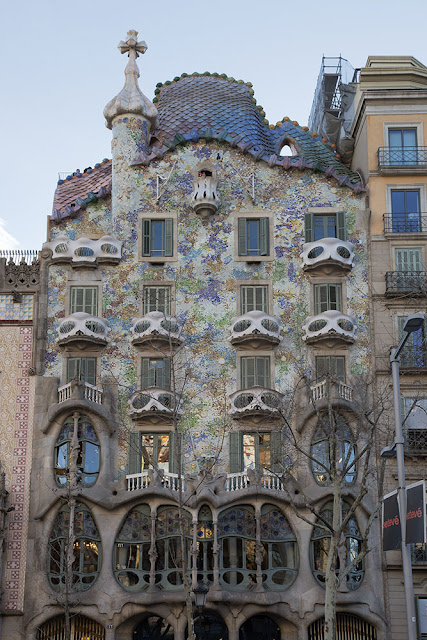 Casa Batlló is an apartment building squeezed among a row of them along one of the major boulevards in the center of the city. The facade is unlike any of its neighbors, however, with its colorful and undulating art deco detailing. We almost didn't go inside. We'd just come from La Sagrada Familia (ticket price: 29 euros - over $30). The price of admission at Casa Batlló was 22 euros and we balked briefly. But our traveling companions convinced us to pop for it and we were blown away for the second time that day.

The entire building, the maintenance of which is supported solely by those steep admission prices, has been turned into a museum and it didn't take long to learn why. Every detail has been meticulously restored and preserved--and by every detail I mean that Gaudí actually designed every single thing in the building. (This was reminiscent of Gaudí's contemporary, Frank Lloyd Wright, who also famously designed buildings down to the doorknobs and dinnerware.) 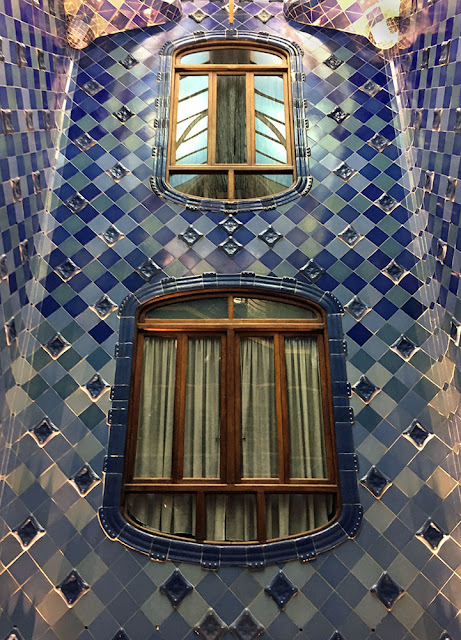 One of the many remarkable details was the tile in the atrium that rose through all six floors. Cast in shades of blue that grew progressively paler in hue so that it would all appear uniform as the natural light coming down through the skylight diminished. 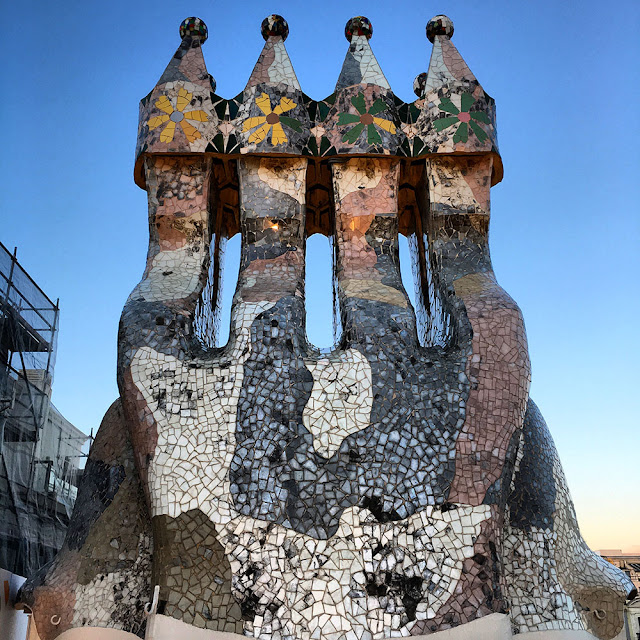 Gaudí is famous for his chimeys and Casa Batlló is an example of why this is so. Another novelty characteristic of his style (and also in harmony with the style of the Art Deco period to which he relates) is the fact that he designed the entire building without square corners. 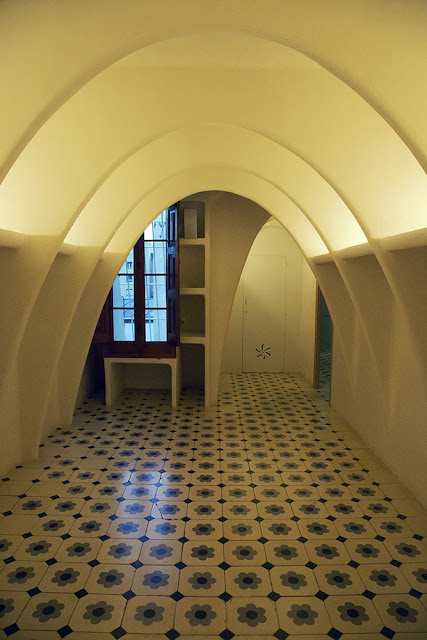 The attic floor clearly demonstrated his novel and effective use of the catenary arch, which we learned is at once derived from nature and inherently more stable than other arch shapes. Gaudí employed it in many of his designs, including La Sagrada Familia. 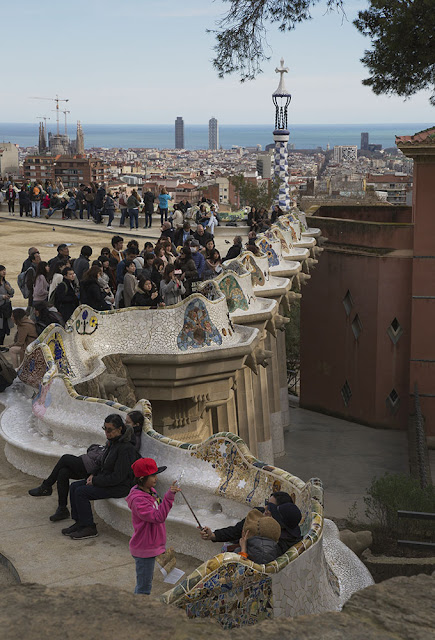 For a change of pace we next went to a park. Of course it wasn't just any old park. Parc Güell, as it is called, was also designed by Gaudí. In this view across the terrace the spires and cranes above La Sagrada Famila can be seen in the left background. The terrace and main entrance area to the park required another admission fee. This time we chose to go around to the public (free) sections. We were not disappointed. 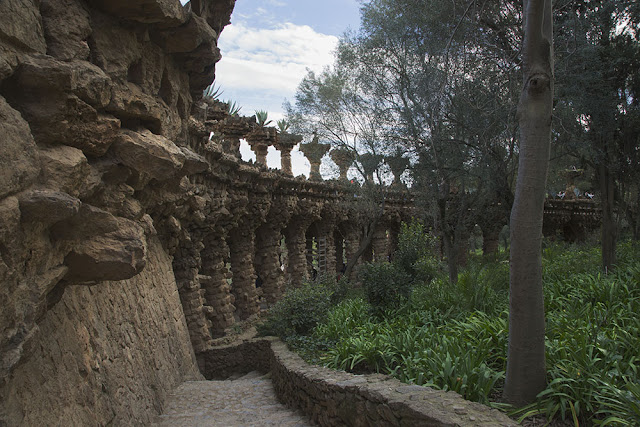 The park rises up a steep hillside and the main design feature is a serpentine walkway that leads throughout the park and up to the summit. 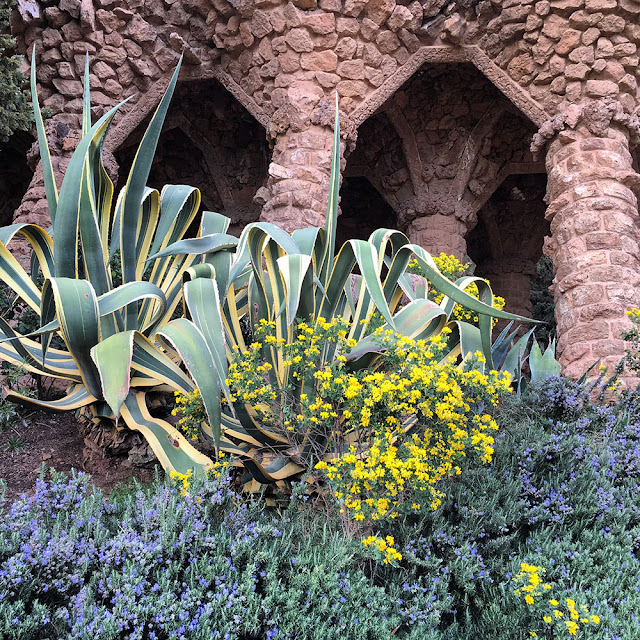 As with his buildings, the causeway-like structure was organic in character and utterly
unique in style. 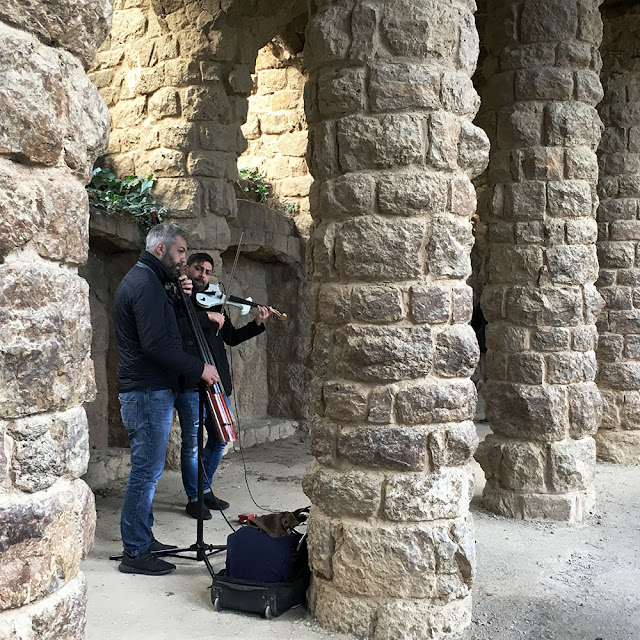 Beneath the Gaudí arcade we enjoyed lovely strains of music by a local duo who played instrumental covers of popular songs by the likes of Coldplay. 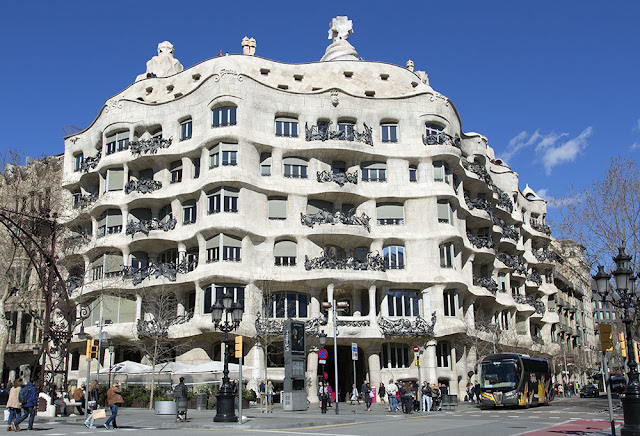 Later in the week we toured yet another of Gaudí's masterpieces, Casa Mila, aka La Perdrera (the stone quarry). Unlike Casa Batlló, this multipurpose structure is still in use, with commercial enterprises on the ground floor and residential apartments above. 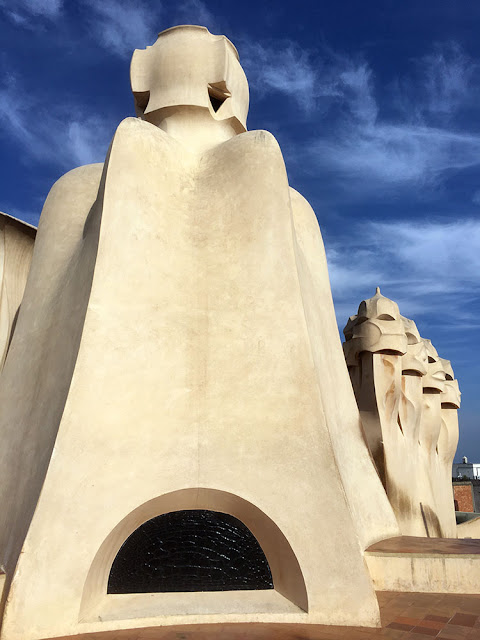 One of the highlights, again, was the rooftop with an even more elaborate (and famous) display of chimneys. Here you see just a few of the many. 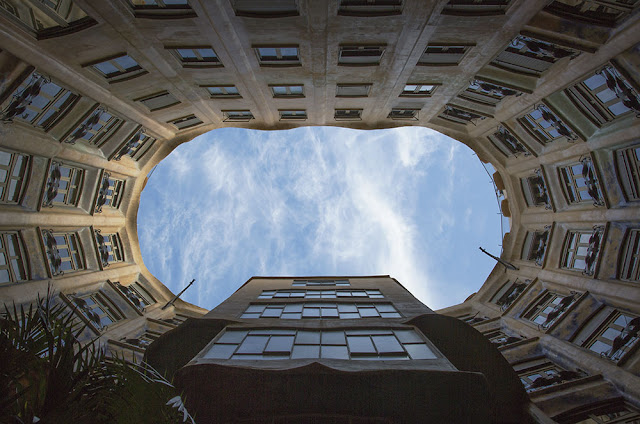 The structure is organized around two atriums, asymmetrically located. The tour did include one apartment that has been restored with its original furnishings. 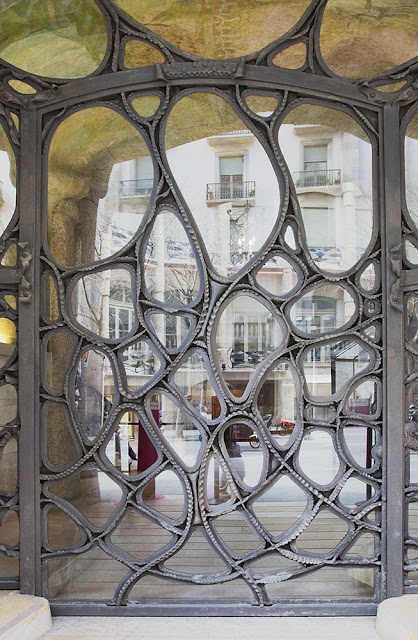 You know right away when you see the door to the building that you are in for an unusual architectural experience.

So, there you have a brief selection and quick tour of Gaudí in Barcelona. We did go back to La Sagrada Familia on our last day there, in order to see it at night. 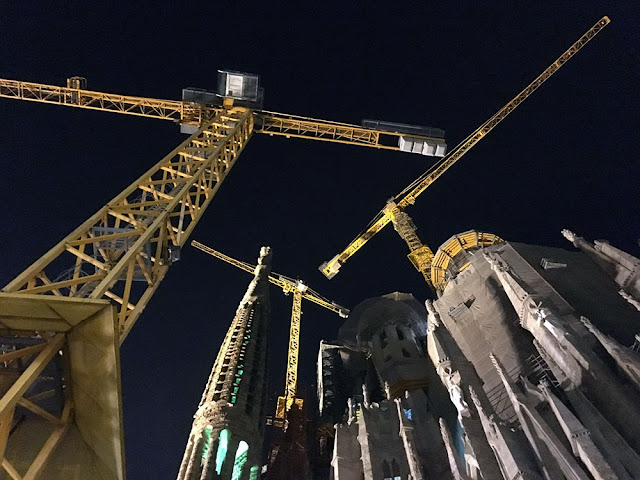 The omnipresent construction cranes were even more prominent lit up by the floodlights that illuminate the facades at night. 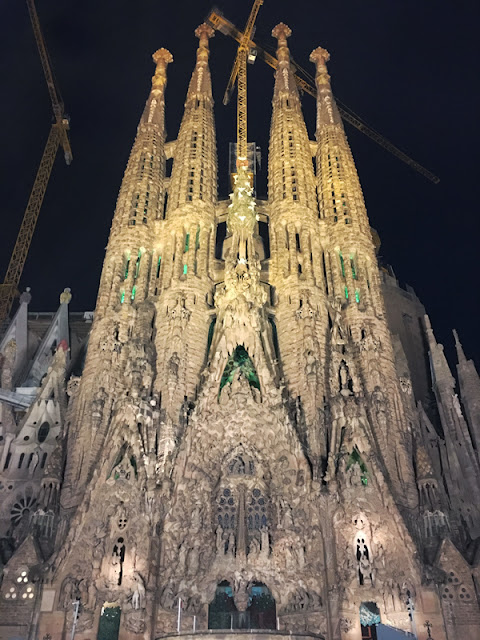 And if you missed my earlier posts from Spain, scroll down or click the links to check out Calatrava in Valencia and the Miró Museum.