A visit to the Joan Miró museum in Barcelona

As a young man Joan Miró adopted a highly personal style within the extended family of Surrealism and an anti-bourgeous attitude characteristic of his time and artistic calling. In 1968, when he was 75, he established a foundation that would build an architectural monument dedicated to his work. The clean white Modernist museum stands on Montjuïc, a mountainside overlooking his native city of Barcelona. His attitude towards society may have shifted, but the collection housed in the museum demonstrates that his distinctive style remained largely consistent throughout his life.

Miró's idiosyncratic manner of working has been called "a sandbox for the subconscious mind." His childlike forms have appealed to me for as long as I've known about him. When I had the great fortune to visit Barcelona recently the Fundació Joan Miró, Centre d'Estudis d'Art Contemporani (Catalan for Joan Miró Foundation, Centre of Studies of Contemporary Art) was one of my primary destinations. I was not disappointed.

The permanent collection includes works from throughout his long career (he lived a cool 90 years, from 1893 to 1983), and although he is among my favorite artists whose famous works are quite familiar, most of the paintings and sculptures on display were new to me. A lovely opportunity! Here I share a selection, just a small fraction of what can be seen at the museum.
This early painting is done in what is called his "detailist" style, which was influenced by primitive and Japanese art, according to the wall label. 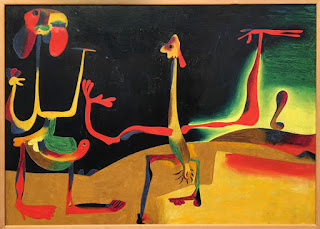 This one, from 1935, is titled "Man and woman in front of a pile of excrement" just in case, I suppose, you might not catch that detail. It is from a series known as the "savage paintings." 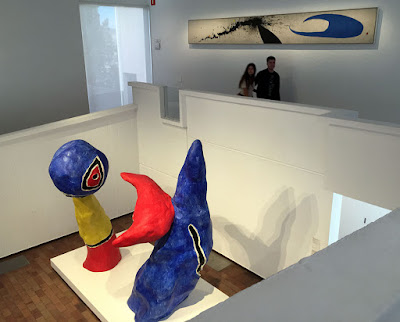 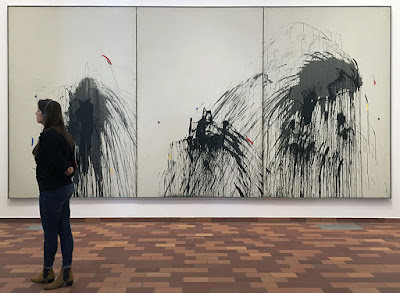 Most of the early work is modest in size but later paintings and sculptures assume a much larger scale. A few vertical ones, such as "Woman, Bird 1" (below) and one of his monumental tapestries (that I didn't manage to capture on my iPhone) take up entire high ceilinged rooms. 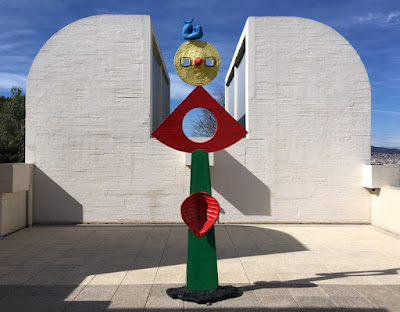 The rooftop provides ample space for sculptures as well as panoramic views of the city below. 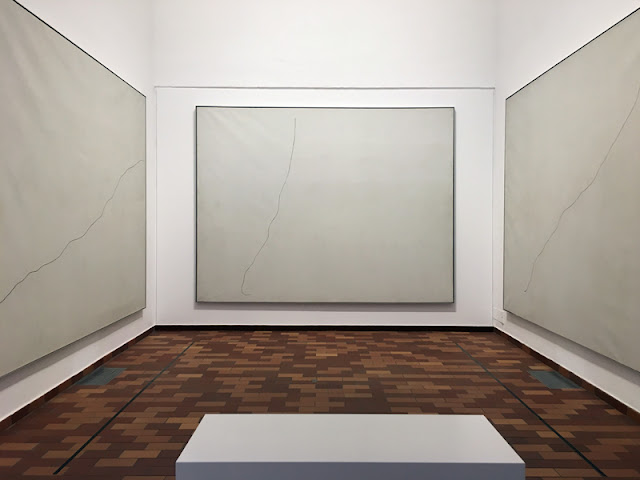 This triptych, mounted in an alcove, is titled "Painting on a white background for the cell of a recluse, I, II, III" (1968). The wall panel explains that the alcove reproduces the placement of the triptychs in the artist's studio and quotes Miró: "To me conquering freedom means conquering simplicity. At the very limit, then, one line, one color can make a painting."

The wall panel accompanying this painting, the first of a series of canvases Miró attacked with a blowtorch, claims that he was trying to "taunt the art market." In all four languages used throughout the museum on its labels someone had written in pencil on the wall next to the panel, "It is easier to taunt it when one's position is either safe or desperate. The rest are in far more complex positions." 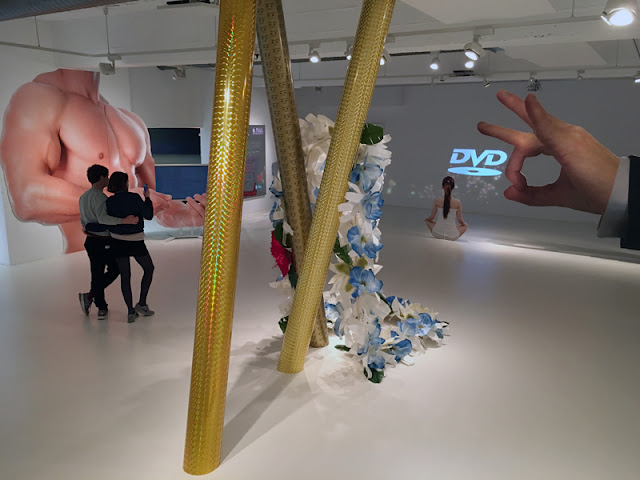 While the majority of work on view is by Miró himself, there are others as well. This complex temporary installation is in a gallery devoted to contemporary artists. It is titled: Plural Being. I am the Others, the Others are Me by artists identified as Momu & No Es.

Of it the website says this: "Plural Being. I am the Others, the Others are Me reflects the constant search for calm in a hectic society. Through a theme park scenario, the exhibition attempts to answer a series of questions about the times we live in, the things we yearn for, and the rewards we expect in return for our day-to-day efforts.

"Momu & No Es present a new installation that recreates a phantomscape through a series of sculptural elements, mantric sounds, suspended images and performative elements that plunge visitors into a space of sublimation and estrangement. A reflection on personal space and on the body as testing ground that questions the human condition in a hyperconnected era."


Other sights and scenes from my visit to Spain--including La Sagrada Familia and several other amazing feats of architecture by Gaudí--can be see on Flickr.