After exploring the grounds and outdoor sculptures surrounding Crystal Bridges I headed inside to see the galleries. (If you missed part 1, click here. Being a photographer myself and also being in the middle of a road trip myself, I started with their current temporary exhibit, called "The Open Road." 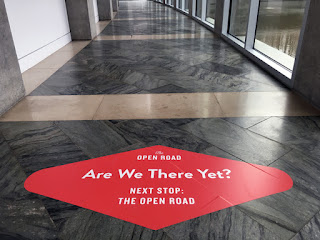 The museum likes to use supergraphics to promotes its exhibits. The (closed) door of The Open Road gallery was emblazoned with one of Stephen Shore's images. 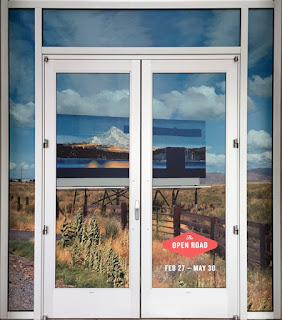 Upon entering the gallery you are confronted with the following quote, stenciled in large white print on the charcoal gray gallery walls.

Well, yes. That bit of hyperbole comes out of privileged perspective, of course. But, hey, it's definitely one I can relate to. 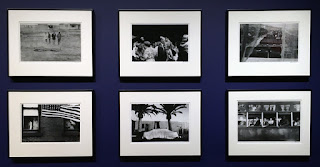 Predictably, the exhibit began with the granddaddy of all American road trip photographers, Robert Frank. His famous book is even called "The Americans." (He himself was Swiss.) A reissued edition of The Americans is on my bookshelf, but I always enjoy seeing vintage prints. In Frank's case the surprise is always how small they are. Later in the exhibition the prints get very large.

Altogether the exhibit included 19 photographers. Each was represented by around six or seven prints. For the most part they were "the usual suspects." I won't try to cover all 19, just a few that stood out for me. 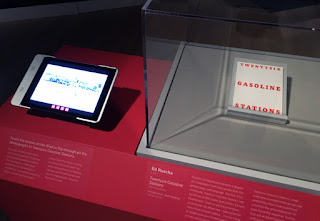 There were prints on the wall too, but I liked the fact that Ed Ruscha's groundbreaking conceptual book, Twentysix Gasoline Stations had pride of place in the vitrine on a large pedestal. The ipad next to it allowed visitors to page through and see all twenty six images in the book. If they wanted to.

Joel Meyerowitz is usually known for his use of color and there were several of those in the show. But this one appealed to me in particular because of the setting on the concrete river. 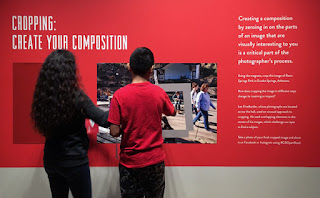 As I mentioned in part 1 of this Crystal Bridges series, the museum is attended by a vast number of schoolchildren. This may account for the high level of interactivity interspersed with the actual photographs on display. I thought this was a clever activity. Magnetic strips were provided to allow kids (or adults) to crop the large photo however they liked.

Here is the Stephen Shore image without the door frame. I've always been a big fan of this one. 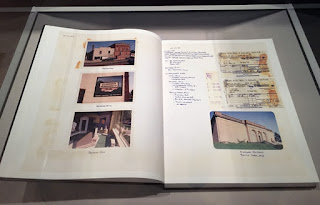 This is one of Shore's road trip journals, illustrating how meticulous he was about note-taking (in case the title didn't clue you in already.) Today it's tempting to let the digital camera's embedded metadata or even the iPhone do the note-taking.

This is from Alec Soth's "Sleeping by the Mississippi" series. Love it. Been there. But never saw it like that, gotta admit.
Onorato was one of only two photographers who were new to me. Including his work, which involves interventions in the landscape, in the road trip themed show seemed a bit of a stretch to me. But I liked it. In case it isn't clear enough what it is you're seeing on the tripod in the photo, here is a detail of it: 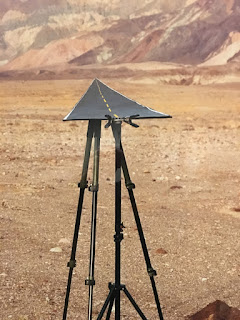 Onorato's actual prints were enormous. A striking contrast with those of Robert Frank and Lee Friedlander. Art has to be big these days, I guess.

Speaking of big, Crystal Bridges is. Part 3, the permanent collection, will have to be very selective indeed. Hope you'll stay with me. (To go back to part 1, the outdoor art, click here.)

Part 3, the permanent collection is online. Click here to go there.