I've been eager to visit Crystal Bridges since it opened in 2011. One reason, of course, was always to see its collection of art. But a primary reason was to see the building and grounds. Designed by world-renowned architect Moshe Safdie, aerial photos of the museum showed it curled like a snake in a wooded ravine. I have a particular fondness for architecture and art that relates to the natural environment. 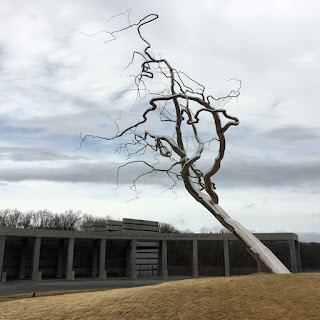 So, when I decided to attend a conference in Houston I turned it into a road trip that included Bentonville, Arkansas, where Crystal Bridges is located within walking distance of the downtown city square. I spent the better part of a whole day there, both inside and out. It was a lot to absorb and far too much to fit into a single blog post. So, here is part 1, artworks that I saw on the outside of the museum.

If you drive to the museum the sculpture above, Yield by Roxy Paine, greets you at the entrance circle. 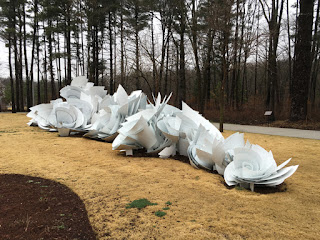 Then you park next to a mound on top of which rests Maelstrom by Alice Aycock, although "rests" doesn't quite capture how animated this aptly titled aluminum sculpture appears.

I arrived at the museum at 10:00 a.m., an hour before it opened. I used the interval to begin exploring the grounds. Here are some of the things I found.

Yes, they have a whole house by Frank Lloyd Wright, a small gem in his Usonian style. The house was "rescued" from its previous owners in New Jersey, where it had been subjected to flooding and might have been demolished. I can testify that it has been beautifully restored. 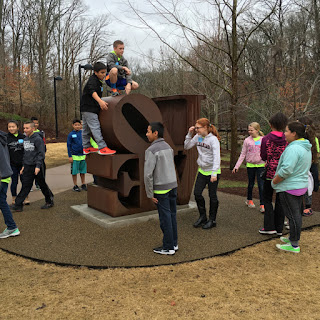 Robert Indiana's Love was literally loved by every school group (and I saw at least five or six) that poured out of the building, trailed by their chaperons. I surmised that school groups were allowed into the museum before the official opening time. When I finally got inside myself I asked about the number of school groups and was assured that this was a daily occurrence. Not only is the museum free to the public but bus transportation is provided free to schools. 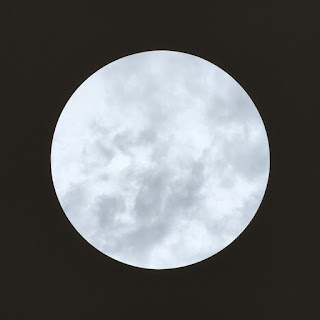 No, I didn't stay after dark (although I could have since the museum stays open until 9) and this isn't the moon. It is the view of the cloudy sky through the aperture at the top of James Turrell's The Way of Color. I love Turrell's work, which I've seen in several different places. I didn't see this one when I was wandering around, so I asked about it inside. As I'd expected, they had one. It was farther away than I'd ventured. So I went back out. 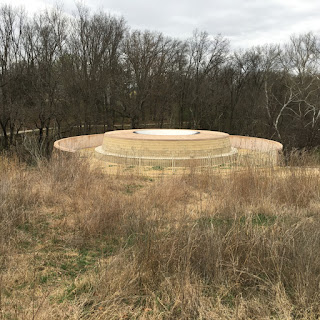 If you've never seen one of these, here is what it looks like from the top on the outside, above and behind the entrance. It sits on the rim of the ravine with the entrance facing downhill. It's like a small shrine and the aperture through which one views the sky is unglazed. I find them magical and peaceful. 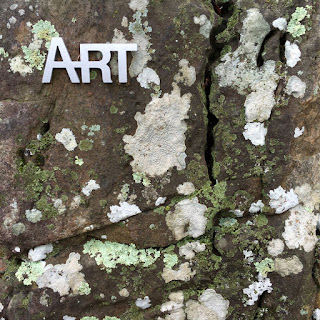 Pop quiz: If it looks like a rock and is situated outdoors in a place where you expect to see rocks and is in fact surrounded by other rocks but this one is labeled "art," is it art? 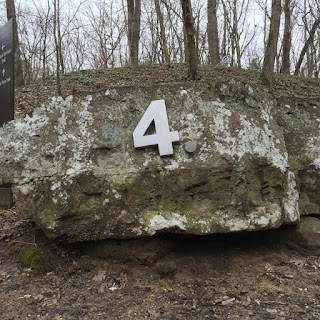 As you can see, there are multiples of this confounding phenomenon. In fact, there are 15 of them placed all around the museum grounds. 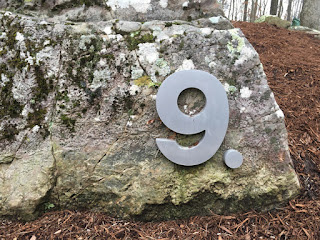 I would have thought they were rocks, myself, if they hadn't had those labels and numerals conveniently attached to identify them. Clearly, though, the museum considers them art, as does the artist, Robert Tannen. 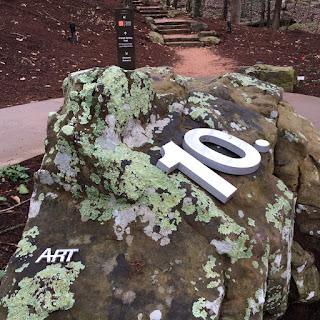 Tannen has titled them, collectively, Grains of Sand, cleverly avoiding the obvious: "rocks." I didn't see all 15 but I can assure you that all of the ones I did see looked just like rocks to me. I'm just sayin'. And, sarcasm aside, I actually like the idea. So, what was your answer? 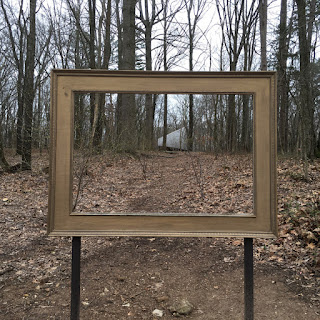 Having been deceived once by the rocks, when I came upon this in the woods I had to go back inside to ask if it was art (as this had no identifying label.) No. This isn't art. Just a handy device someone at the museum thought up to direct visitors' attentions to the scenery through it (which likely looks more scenic when the flowers have bloomed and trees have leafed out. Too bad there isn't a rock to look at through the frame!) 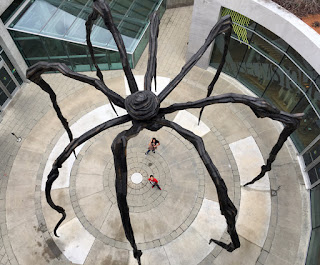 Finally ready to tackle the inside galleries, I discovered that entering the building required making my way past this enormous spider in the courtyard. It brought to my mind Tolkien's sinister Shelob, but Louise Bourgeois calls it Maman.

Stayed tuned. I hope to have time to share the pictures I shot on the inside. In addition to the permanent collection, they had a fabulous temporary exhibit of photography on the theme of the road trip. How cool is that?

Part 2 is up and running, so to speak. Click here to go there.