As art museums go, Crystal Bridges is a neophyte, founded a mere 5 years ago. However, the founder was and is Alice Walton, of Wal-Mart fame, and who is ranked the 16th wealthiest person on the planet. With a $200 million endowment and Walton's support, the museum is making up for lost time. The permanent collection is very comprehensive. One of the things that made it interesting for me was the fact that, with a couple of notable exceptions, the works on display by the many familiar artists are not the familiar ones.

I'll make this brief. Just a small sampling of the huge collection. A few things that caught my eye. 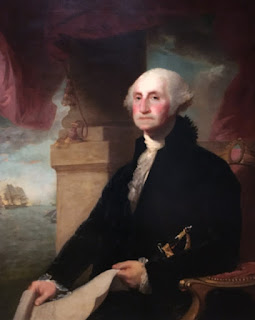 I'll start with a couple of the exceptions. This isn't just any old painting of GW. If I'm not mistaken this one by Gilbert Stuart is the single most famous one. 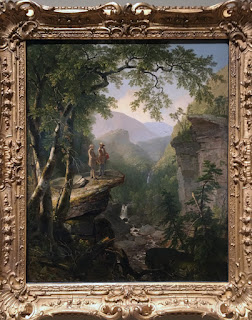 This is Kindred Spirits, by Asher B. Durand, possibly the single most iconic painting of the Hudson River School. (See my recent review of the Hudson River School exhibit at Milwaukee Art Museum.) The acquisition of this painting was controversial but the controversy adheres primarily to the New York Public Library for selling it rather than to Crystal Bridges for buying it.

How do you capture music in a painting?

Not a typical Bellows. I've never seen one quite like it and I love it.

Although this is fairly typical Hopper, it was new to me. 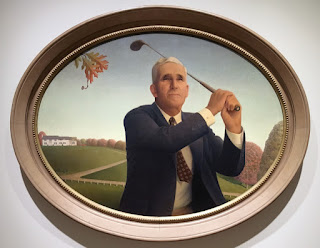 This one's just plain fun, don't you think? Did you guess who painted it? Look at the round balls of trees and curve of the hill. Grant Wood. But, although it's a portrait of a real, specific person (a banker named Campbell in the wall label), he's titled it "The American Golfer."

Someone I've never heard of. A bit of allegory. 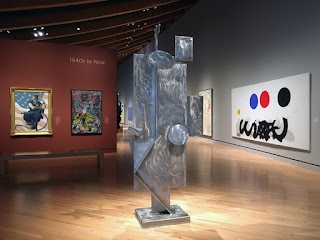 Gallery view featuring a David Smith sculpture and paintings by Norman Rockwell and Gottlieb, among others. Eclectic mix.

I had to include this as I'd seen two very similar versions of it at MoMA and the Whitney in January. 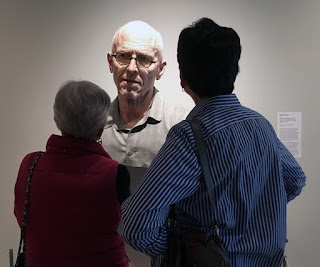 Another artist I'm not familiar with, Evan Penny. Huge, superrealistic sculpture with a catchy title: "Old Self: Portrait of the Artist as He Will (Not) Be. Variation #2." Begs at least two questions for me at least: Does he expect to die first? And, how many other variations of what he doesn't expect to become are there?

Holzer gets a whole courtyard built right into the museum to herself. Nice.

This was a blast from the past. Having forgotten about him completely, upon seeing this (quite gigantic) painting I was immediately reminded of an exhibit of his paintings at the Milwaukee Art Museum. Probably in the 1990s.

OK, this was the biggest surprise at the museum, in more ways than one. First, although very similar to many I've seen, it's literally the biggest Uttech painting I've ever encountered--almost as big as the Tansey on the adjacent wall. It also takes pride of place at the culmination of the entire collection, on a wall of its own in the final gallery. I never expected to see the work of a professor of mine at UWM hanging in such a prestigious setting.

For the sake of brevity I've left out quite a few gems. If you're going anywhere near the northwest corner of Arkansas, I recommend a swing in the direction of Bentonville to see this museum. I bet it's even more stunning after the trees have leafed out. 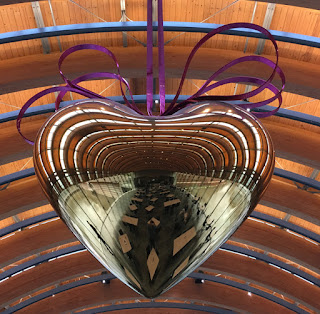 I leave you with a "Hanging Heart" by Jeff Koons, which literally hangs in the cafeteria's grand hall at the heart of the museum complex, one of the "crystal bridges" that span the impounded waters of the creek running through the ravine.

This is part 3 in a trio of posts about Crystal Bridges. If you missed the first two and want to start at the beginning, click here. Part 1 is about the outdoor art and part two is about the photography exhibit called "The Open Road."
Posted by eddee at 5:19 PM