Lynden Sculpture Garden is a Feast in more ways than one Linda Wervey Vitamvas installed this piece (above), entitled Indigenous Transience, at the Lynden Sculpture Garden three years ago in the summer of 2010. It was the first of a series of invitational collaborations called Inside/Outside sponsored by the Lynden. Although the installations were intended to be temporary and most were indeed ephemeral, this one has lasted all these years. Until now, that is. Vitamvas was present yesterday to decommission the work in advance of its disassembly.

However, you can see more of her experimental ceramic work at the Lynden. Vitamvas has been invited to engage in an on-going dialogue with the landscape and the gardens as an artist in residence of sorts. Her latest offering is called Feast. (Below) Read all about it on the Lynden website. 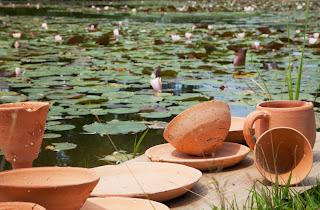 A different kind of feast awaits those who venture into the dining room of the Bradley family's former house, which now serves as the gallery. Emilie Clark's Sweet Corruptions is laid out on the formal table, as if the family were preparing to dine. No one will wish to partake of this particular feast, however. It is comprised of food waste elaborately collected and preserved, literally, over the course of a year. You can read a far better account of that, as well as Clark's other art works at Art City.

While I was there I also revisited one of the other remaining pieces from the Inside/Outside installations. Amy Cropper and Stuart Morris collaborated on Inverse, for which they painted rocks and the trunks of trees in bright, unnatural colors. In a fittingly ironic twist this particular tree has resprouted vigorously despite the remnants of the paint on it. A fine turn of the screw, if you ask me! 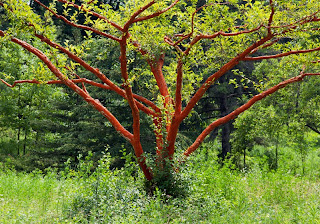 Full disclosure: I had the privilege to be among the artists who participated in Inside/Outside, in Oct. 2011.