Why did Mike Brenner shave his head for Ai Weiwei?


And what does art have to do with democracy?
And who is Ai Weiwei anyway?
If you’re a regular follower of Arts Without Borders, chances are you know who Mike Brenner is. He keeps a fairly high profile in art circles around Milwaukee. He’s known as the owner of the now-closed Hotcakes Gallery, a founder of Milwaukee Artists Resource Network, and disputatious commentator regarding the Bronze Fonz, among other things. When he was asked today – as he stood at the lip of the Calatrava bridge with his newly shaved head – if he is an artist he humbly demurred, admitting only to being an “arts agitator.” 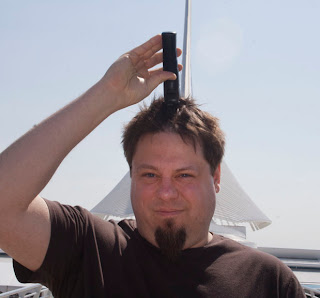 Mike showed up promptly at 10:00 am, when the Milwaukee Art Museum opens, literally and figuratively, and began shaving the center line of his head as the wings of the Calatrava building began to rise. He did this in solidarity with Chinese artist Ai Weiwei, who is being “detained” by the authorities in China. Charges have not been made public, but Ai Weiwei has long been an activist and outspoken critic of the Chinese government. 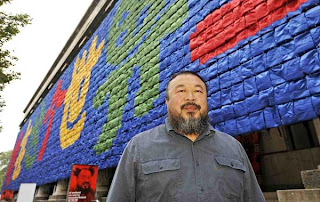 Chances are also good that you have heard of Ai Weiwei before, but if not, you can learn much more about him readily. He is easily the most famous living Chinese artist. There is even a page about him on Wikipedia. One of his more famous works of art was an installation of 9,000 children’s backpacks in Munich, Germany to commemorate the children killed in the collapse of a school during the 2008 earthquake in Sichuan, China. Controversy erupted when the collapse was attributed to faulty construction and oversight. Read more about this piece (above) in the Christian Science Monitor.
Recent events right here in Wisconsin that need no reminders have led many to reconsider the importance of democracy. Today Mike Brenner decided to shave his head to look like Ai Weiwei. It is a small thing, perhaps. But I was happy to bear witness and I too hope a broader dialogue will ensue. Thanks Mike! 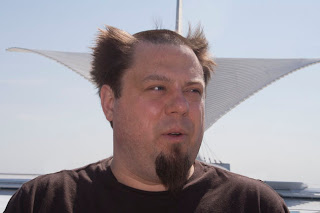