UPAF’s Ride for the Arts goes over the Hoan

What does it take to get an estimated 7,000 people to ride bicycles and raise money for the arts in Milwaukee? 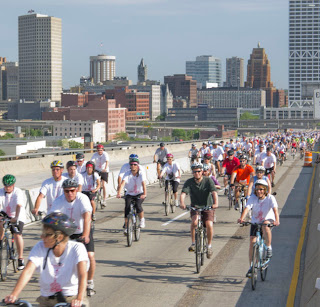 How about a glorious day and an unprecedented opportunity to ride over the Hoan Bridge? 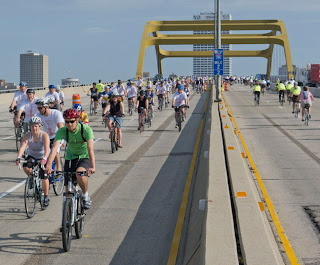 Maybe throw in a dash of anger over recent cuts to the arts in the on going Wisconsin State budget battles.
I made the 25-mile route down to Grant Park and back. Going over the bridge was the highlight, but the entire ride was marvelous. Not only was it a perfect day, with sunny skies and a cool breeze off the lake, but the ride went off without a hitch (as far as our group was concerned: according to the Milwaukee Journal Sentinel account, there were minor glitches at the beginning of the longer legs. Some people rode up to 75 miles! Nice.)
It was especially rewarding to be part of such a huge outpouring of support for the arts. The group I was with agreed that we all needed to feel good about that! 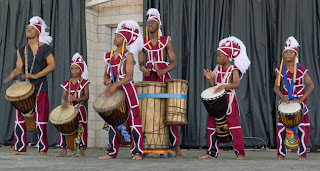 And afterwards we went back to Summerfest and enjoyed a sampling of the fruits of UPAF’s efforts, such as this young troupe of drummers with the Ko-Thi Dance Company.
Posted by eddee at 2:25 PM