Summer in Milwaukee is brief and fickle. It is a time to forget about the long, cold slog of what passes for spring, to get outdoors, attend the festivals on the lakefront. Paradoxically, we rush to relax, to enjoy the warmth before it vanishes. When it is warm it is glorious!
Summer in Milwaukee; who wants to be reminded of war? Even before the change in the weather, the mood of the country has shifted. Never fully engaged at home, after ten years the nation has become tired of war. But the fighting continues. The news from Afghanistan, like the uncertain weather here, is ambiguous: There has been progress; but it may not last. The Taliban seem to have been weakened, but there is fear of resurgence once the U.S. draws down its troop strength as planned this summer. And life for the troops themselves, as well as the Afghan people remains fraught with tension. Although the daily effort to survive has become easier, the unpredictability of violence is ever present.

In the midst of these divergent summer realities CardinalStritch University has brought us an exhibition of photographs from the Vietnam War. Do photographs from that war have any relevance to our current lives or provide a context for understanding the on-going predicament in Afghanistan and Iraq? I think they do.
The show is called “The Face of War: Vietnam Combat Photographers.” Unlike many of the now iconic – and to most of those of us who lived through it, searing and unforgettable – images from that tragic and divisive period in our collective history, most of these were taken by largely unknown military photographers. Half of the exhibit is award winning work by the late Robert J. Ellison, who has ties to Milwaukee and who died at the age of 23 in combat in Khe Sanh. The rest were done by members of the Department of the Army Special Photographic Office. The emphasis, as indicated by the title, is on the people involved. Most of the subjects are individuals. They are soldiers and civilians, American and Vietnamese.
If it weren’t for some of the captions, the photographs would reveal nothing of politics or military strategies. There is no reason for fighting in the faces that stare out of these frames. There is no anger, no patriotic zeal. Mostly we see numbing fatigue. 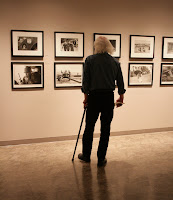 “The Face of War” is an exhibition, but there is little impulse to view the photographs as aesthetic objects. This in no way implies that they are inferior as pictures, poorly composed, or visually uninteresting. The quality of printing varies. Some of the images have been enlarged to a point that exaggerates the graininess of film; others are lush and beautifully toned. Some are in color, some black and white. But that is not the point.
The wall text makes a point of honoring the extraordinary talents and efforts of the photographers, and rightly so. But I don’t feel it diminishes their achievements to say that it is the subjects that are most affecting, not the varying styles or techniques of the photographers. What unifies this show is the consistent attention that is paid to the common humanity of the people being portrayed.
A shirtless American casually carries his weapon, his tanned skin contrasting starkly against a background of billowing bright purple smoke. A soldier is caught in the simple act of shaving, framed by sandbags. A platoon crouches in a trench as the earth above explodes and showers around them. A Catholic priest leads troops in prayer on bended knees.
In one photo, a line of people – helmeted U.S. soldiers carrying rifles, Vietnamese women in white shirts – wade through chest-deep water. We cannot see where they have come from or where they are headed. We do not know why they are there.
Wars are fought by ordinary people. The victims who suffer and die are ordinary people. We who live at a distance from our current war must go to some lengths to avoid thinking of this truth, for we too are ordinary people and it is likely to disturb our comfortable lives. Maybe we find it possible to wage war because we can go on about our daily lives and we can enjoy our summer activities. I found it revealing to take a short break from my own reality to gaze with compassion into the ordinary “faces of war.”
The exhibit runs through July 31. A closing reception will coincide with Gallery Night, July 29, and will feature a talk by the curator of the Wisconsin Veterans Museum as well as live music by Guitars for Vets. For gallery hours, directions, and more information about the exhibit, go to the Cardinal Stritch website.
The images that accompany this post are courtesy Cardinal Stritch University.
Posted by eddee at 6:32 AM