Who is JR the “Photograffeur”?

Banksy, the infamous graffiti artist, inflated his notoriety with the mockumentary called “Exit Through the Gift Shop.” I found both his movie and his art intriguing (see previous post). But I just came across another elusive street artist whose work I find truly captivating. His nom de guerre is simply JR. Calling himself a “photograffeur,” he wants his art to do more than tweak the establishment. He wants to change the world with photographic graffiti. A recent body of work called “Women are Heroes” has been plastered all over trains, on rooftops, and other public places in strife-torn countries in an effort to empower women. Although trains sound like a normal place to find normal graffiti, what he does to them is so much larger and more potent it goes beyond even the advertisements that consume entire busses. 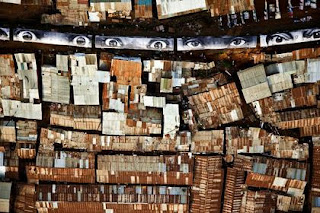 The work is incredible. I came across this one example (above) today when I opened National Geographic. But they only published this single image with little explanation, other than it being part of a “global art project.” It took a bit of searching to discover the true nature of the project. Like Banksy, his work lacks official permission and shows up in unexpected public places. Unlike Banksy, JR combines his subversive artworks with lofty humanitarian goals; he solicits help from the communities where the work will be seen; and the results combine massive appeal, powerful messages, and archetypal resonance. 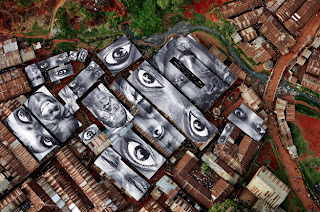 And he’s being rewarded for his anonymous and illicit creations. My search for JR’s images turned up a website called the TED Prize, which gives an annual award of $100,000 to an “exceptional individual” who has an idea that can change the world. Check it out at TED Prize. Apparently JR plans to come out of the closet to accept his prize, but until now has remained anonymous despite the ambitious and collaborative nature of the work.
He does have a website. Here is how his (anonymous) bio begins:

“JR owns the biggest art gallery in the world. He exhibits freely in the streets of the world, catching the attention of people who are not the museum visitors. His work mixes Art and Act, talks about commitment, freedom, identity and limit.”

In addition to “Women are Heroes” my favorite JR intervention, called “Face2Face” is a series of monumental faces peering and grinning at passersby from the wall separating Israel from Palestine. 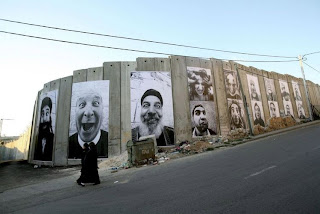