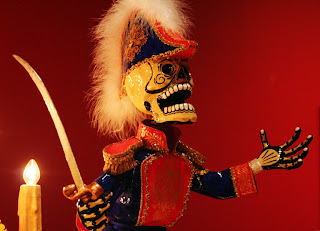 Detail of La Flor de Cempasúchil: Flower of the Dead
The annual exhibit of ofrendas and cultural event of el Día de Los Muertos – the Day of the Dead – opens at the Latino Arts Gallery at Milwaukee’s United Community Center this Friday. It’s my favorite Milwaukee version and I’ll be sure to see it there. I encourage you to visit if you’ve never been. Ofrendas tradionally take the form of altars and pay tribute to the lives of people who have died, usually family members. Skull and skeleton imagery abounds.
However, if you have the chance to go to Chicago anytime between now and Dec. 13, don’t miss the ofrendas at the National Museum of Mexican Art. It is the largest Día de Los Muertos exhibit in the country and the artists who create installations there often go way beyond the traditional forms. There is one tableau that fills an entire gallery with life size skeletal figures, includes a video display, and has a "ground" image with railroad tracks that visitors walk over. The displays also go beyond the traditional personal memorials to celebrate a wide variety of historical and topical themes. It being 2010, one entire room of the gallery was devoted to memorials representing the bicentennial of Mexican independence from Spain in 1810 and centennial of the Mexican revolution in 1910. 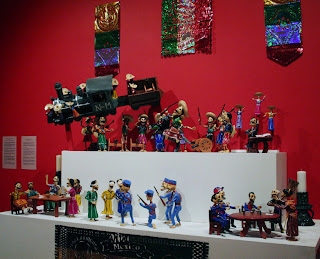 This example, called “The overlooked heroines of the Centennial and Bicentennial,” is dedicated to Mexican women who fought during the two wars. 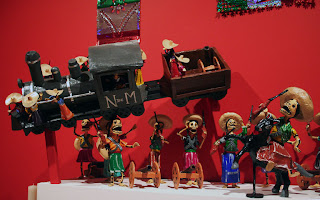 Detail of above
This detail (below) from another one called “The Encounter of Two Worlds: Battle Scene” shows how explicit – and political – some of these displays can get. 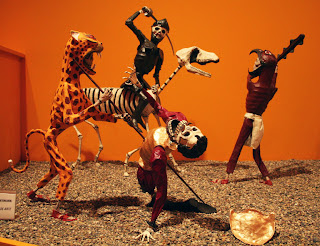 Another room included this thoughtful homage to earthquake victims in both Haiti and Chile. It was a massive group undertaking by school children grades 1-8 at Stone Scholastic Academy, a Chicago public school.

The detail shows some of the poetry written to express the tragic loss and sympathy for the people who
have suffered. According to the display panel, the students understood that the Day of the Dead is about “rejoicing death as the second half of the journey” and that their project should be festive like a birthday party – “remembering the good of people and celebrating their entrance into a new world.”
This more traditional ofrenda (below) features La Flor de Cempasúchil: Flower of the Dead. Cempasúchil flowers have been used as offerings for centuries and symbolize the illumination of the night the way the sun illuminates the day. 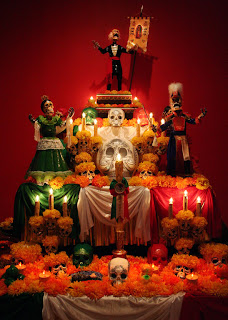 And as a bonus, if you visit the museum before Nov. 28, you can also see a second exhibit called Millas y Kilómetros. This brings together the work of nine artists of Mexican descent currently working in Chiapas and Chicago. Here is just one sample by Juan Chawuk called “Migrant Nahual.” 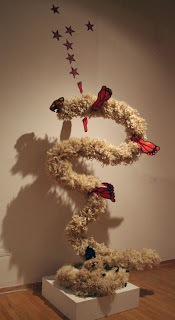 Read my post about Milwaukee's two Day of the Dead exhibits here.

﻿P.S. I apologise if the spacing on this post looks a bit screwy. Blogger is giving me a lot of trouble (and I'm not happy about it! - is anyone at Blogger listening?!!!)
Posted by eddee at 4:13 PM