"Too Hard to Keep" at Riverside Arts Center

Do you have a photograph – or an entire album! – that, for whatever reason, you don’t want to see again but also don’t want to destroy? What a concept! “Too Hard to Keep” is a premise and the name of a new archive compiled by Chicago photographer Jason Lazarus. It is also the title of an installation from that archive currently on display at the Riverside Arts Center in suburban Chicago.

I went there recently with the Photo Council of the Milwaukee Art Museum. We saw great exhibits at the Art Institute and Museum of Contemporary Photography as well (and if I have time I will try to write them up, too.) The small storefront gallery has two rooms. As you enter the gallery the walls you see mostly 4x6 prints widely scattered around the walls of the room. There is no apparent order or coherent theme to the images. 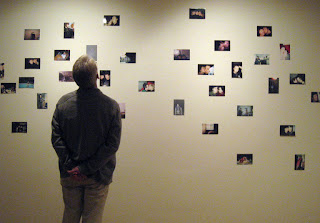 In the back room is a more focused installation (above). One wall is filled with a collection of images donated by a single person – consistent with the private nature of the theme none of the donors are identified. They are mostly images of her with her ex-boyfriend. One is left to wonder at the particulars of the relationship, assuming a breakup of a sufficiently unpleasant nature to incite the donor to rid herself of all these reminders.

Opposite that is a wall with a single image that requires little imagination of the viewer to understand the reason for it being too hard to keep. The "negative space" of the wide, white wall adds to the power of the expressive image. 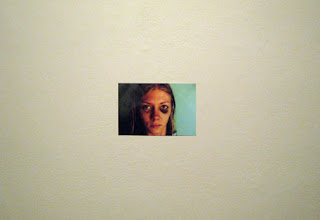 The photo council was treated to a lively explanation of the project and installation from its curator, Jason Lazarus. Lazarus, who teaches at Columbia College Chicago, has established himself as a bit of an iconoclastic photographer. Most of his efforts these days go into projects like this one that involve the collecting and/or curating of other people’s work. As a teacher, I admired his poise and energy as well as the deft and good humor with which he addressed questions from the group that crowded his small gallery. The project is fascinating in itself; the twinkle in his eye as he discussed it was a delightful bonus. I expect his students are lucky to be his students. 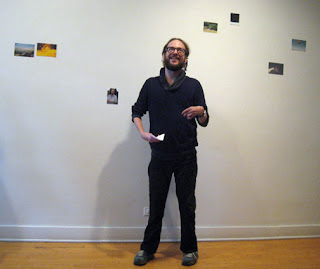 If you have a picture that’s too hard to keep yourself and you want to send it to someone who will not only keep it but treasure it, go to TooHardtoKeep. Or you can go there just to learn more about the project and to see additional photos of the installation.
Posted by eddee at 8:17 AM