"Exit Through the Gift Shop" a fun movie - but is it ART?

It is billed on the director’s website as “the world’s first street art disaster movie” and it seems to have generated nearly as much controversy as the illegal artistic activities it portrays. The director is the notorious Banksy, as secretive on-screen—where his identity is concealed as he deadpans the quips that are among the film’s most entertaining moments—as he is in the dangerous world of subversive street art.


Whatever the truth—and that notion is as nebulous as Banksy’s true identity—this film is engrossing. It’s ostensible protagonist, Thierry Guetta, is a wanna-be street artist with an obsessive desire to record the nefarious activities of those he admires. Most of the story line follows Thierry as he travels around the world to find and film street artists engaged in their clandestine endeavors. These include the now famous Shepard Fairey and many others who go only by nom de guerres like Swoon, Cheez, and Coma. The movie looks like a documentary, but the expected trajectory of the plot is as ephemeral as the graffiti. (In this one fashion it reminds me of another movie I recently saw on DVD: The Informer. Like “Exit,” that very different movie sets up an expectation—the standard Hollywood thriller—and gradually assumes a surprising new identity as a psychological portrait without losing its pacing.)
I was glad I didn’t read the NY Times review of this movie before seeing it (and therefore recommend against it, hence no link) because it reveals too much of the ending, which should come as a surprise. However, the reviews are overwhelmingly positive. (Source: rottentomatoes.com.)

The movie leaves more questions in its wake than it answers even without the author’s mysterious identity. What is the true nature, purpose, and—a big one—value of “street art?” Don’t confuse the art depicted in this movie, which is astonishing in its range, technical accomplishment, and content, with the kind of graffiti usually seen under bridges. What is the relationship between the artist and the art work? This question is as multifaceted as a diamond and just as beautifully and subtly handled, if ultimately unresolved. What is the artist’s responsibility to the audience? In fact, who is the audience for this work? What happens to street art when it is discovered to have economic value to collectors? Who is being conned by whom?

My wife and I both loved it. The scene in which Thierry is interrogated by guards at Disneyland alone is worth the price of admission. It’s playing at the Oriental Theater. See it. 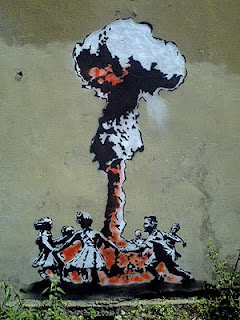 An example of Banksy street art
Posted by eddee at 8:02 AM