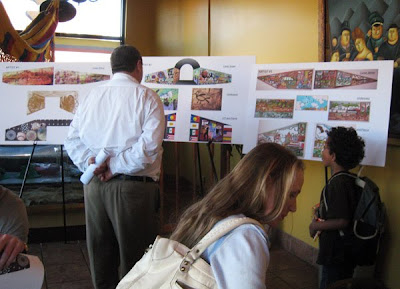 A good crowd turned out yesterday to view five proposals for the Valley Passage Mural Project, sponsored by the Menomonee Valley Partners, Layton Blvd. West Neighborhoods, and the Friends of the Hank Aaron State Trail. After public input, combined with input from other stakeholders, the winning proposal will grace the retaining walls of the new Valley Passage. This will open up an historic link at 37th Street between the Silver City neighborhood and the Menomonee Valley. The former tunnel that allowed workers access to jobs in the Valley has been closed for decades. Construction of the new Passage is slated to begin next month and to be completed in September. The murals will then be painted on the concrete approaches and inside the new Passage.
Posted by eddee at 8:14 AM