Who knew that four minutes and 33 seconds of silence could generate so much talk? Or, in this case, written words. Of course, this isn’t just any random four and a half minutes in time (although, paradoxically and not coincidentally, it could be). 4’33” is the title of John Cage’s most famous and controversial musical composition and the subject of a new book, titled No Such Thing as Silence: John Cage’s 4’33” by Kyle Gann.
For the uninitiated, the composition called 4’33” was first performed in 1952 by pianist David Tudor in an open air theater in Woodstock, NY. Tudor did not play the piano, however, because the piece requires the musician and any musical instrument present to remain silent during the titular duration of the performance. An audience that is prepared for this will also remain, if not silent, at least respectfully quiet. As the title of the book suggests, the experience yields something other than silence. What they hear is whatever random noises the environment of the venue provides. Audiences that were not prepared for this have been known to react less charitably.


Whether 4’33” is “the apotheosis of twentieth-century music” or a scandal depends on one’s point of view. Although I’ve been aware since I was very young of the sensation caused by this piece, not being a musician, it was never more than a curiosity in the back of my mind. Gann’s book, which I picked up from the library on a whim, has been a surprising treat. I freely admit that, although I “get it,” I’m not a big fan of either minimalism or pure conceptualism in art. This piece stands as one of the monumental achievements of both in music. That I found the story of its creation compelling is a tribute to the author, who writes without the dense academic jargon normally associated with such work.

I must confess that, even after reading the book, I mentally roll my eyes when 4’33” is described as being “composed.” The score, which adorns the book cover (right), is a page full of blank staffs. But I found the book compelling for another reason: I love the story of Cage’s creative process and the transformation of his thinking over time. This sounds paradoxical, but it took years to complete a work that contains not a single note. Cage originally conceived it as an expression of silence and had planned to title it “Silent Prayer.” But he gradually concluded that there is “no such thing as silence.” His composition would frame the period of time during which it would be the audience’s responsibility to perceive the world. Hence the title 4’33”.
Among Cage’s many influences was the equally seminal—and controversial—artist Robert Rauschenberg, whose white paintings of 1951 (see below) were the visual equivalent of silent music. Other influences range from Erik Satie, to Muzak, to Zen Buddhism and the I Ching. Cage in turn had a profound effect upon a younger generation of composers whose repertoire of sounds that could be considered musical had suddenly become unbound and infinite. 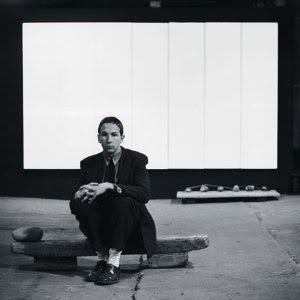