Although it's been a little while since I visited New York and saw the AIPAD Show, (see earlier post) I haven't done it justice. I'll add a couple thoughts.

There's no way I could actually pick a favorite at a show that includes so many luminaries from throughout the history of photography, like Cartier-Bresson, Arbus, Atget, Weston and the like. There were contemporary icons like Salgado as well. If I could afford to collect at these levels I would love to have them all.

So, to narrow the field, I'm picking a personal favorite for a different reason. I was treated to several portfolios of Jeff Brouws's work at the Robert Mann gallery and I found them quite compelling. I've heard of Brouws but hadn't gotten to know his work that well before. His most recent series is called RR Rights of Way. They depict the mostly grassy and overgrown spaces that railroad tracks once inhabited but which have become merely lines that cleave the landscape. They appeal to the strong strain of urban wilderness in my own work.

A quick google search doesn't turn up any examples, unfortunately. The image below, called Rage, is from an earlier series, called Language in the Landscape, from Brouws's website. 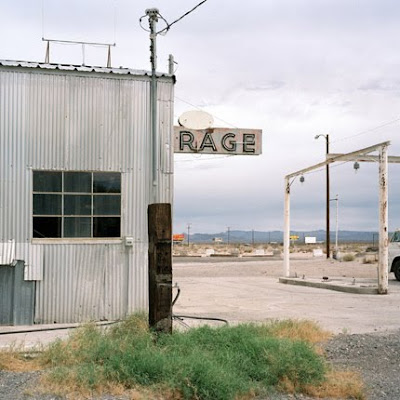