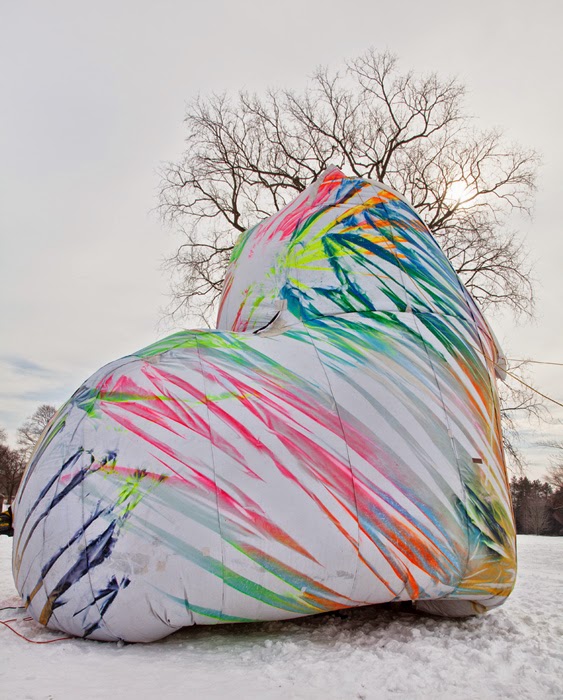 Giggles, belly laughs and expressions of amazement emanated from the gigantic, colorful inflated sculpture. Powered by a dozen delighted people hidden inside, the bulbous, floppy form lurched around the snowy grounds of the Lynden Sculpture Garden. The enormous interactive “sculptural event” was created, choreographed and guided by Chicago artist Claire Ashley.

Entitled “My Little Pony,” Ashley said it was loosely inspired by the famous Trojan horse. With its resemblance to circus tents and hot air balloons it was the perfect centerpiece for the Lynden’s daylong Winter Carnival on Saturday. 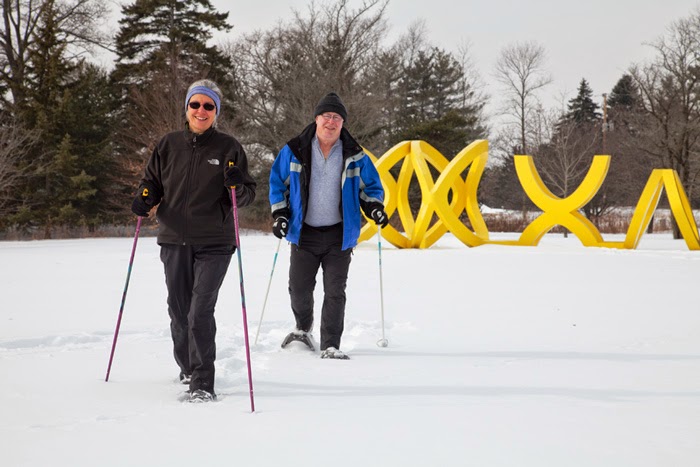 A beautiful, sunny day brought out crowds of people, including many families with children of all ages. A full complement of staff and volunteers had prepared a diverse array of activities to keep everyone engaged. There were art-making projects outdoors and in the studio, face-painting, guided tree-walks, bird watching, and even a mediated cloud watching experience. People came with show shoes and cross-country skis to enjoy the grounds. In addition to Ashley, other guest artists also had been invited to create installations for the day. 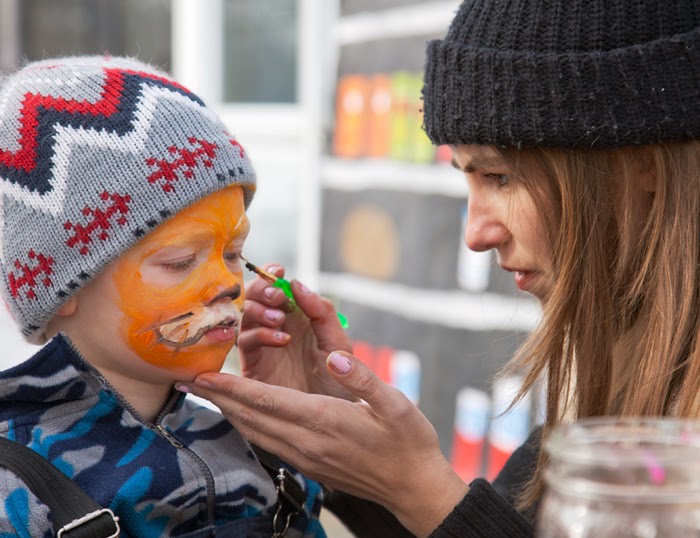 Here is a photographic tour of some of the festivities and participants. 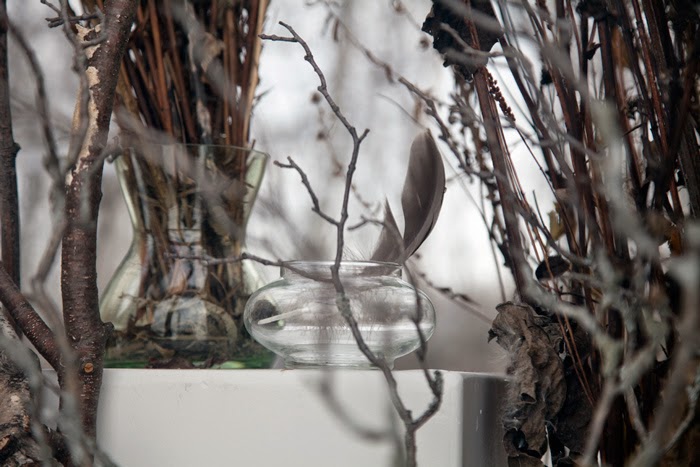 All of the materials had been collected on the Lynden grounds earlier in the fall. 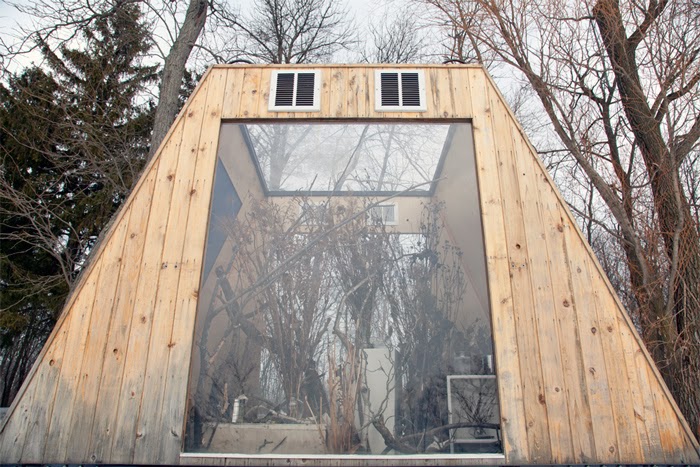 The trailer, appropriated by Christiansen for the occasion, was itself a performative sculpture called Sightseer by Brian Nigus. 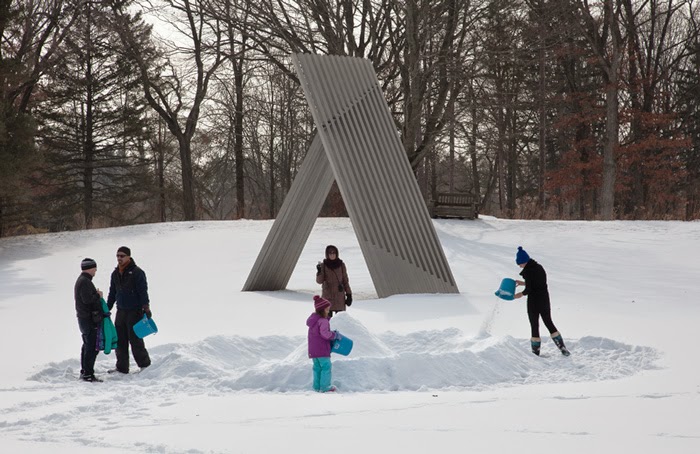 Although unable to be present in person, environmental artist Roy Staab, who has participated in past Winter Carnivals, contributed a conceptual scheme for a colorful snow city. 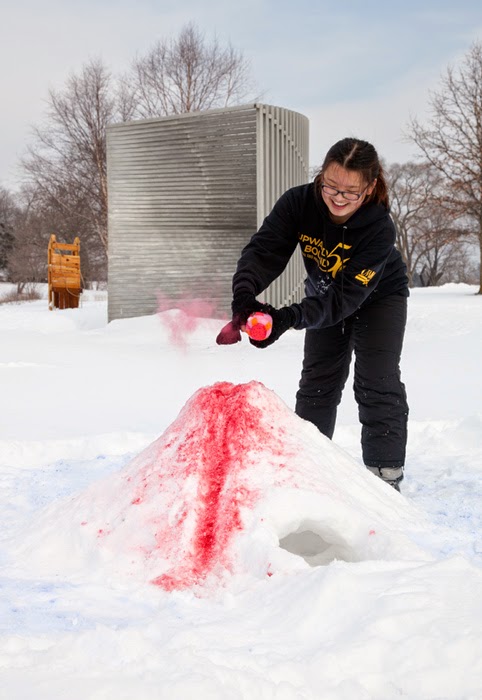 Under the direction of Lynden volunteers, it was executed by visitors, who added snow forms onto it and joyfully colored it with powdered pigments throughout the course of the day. 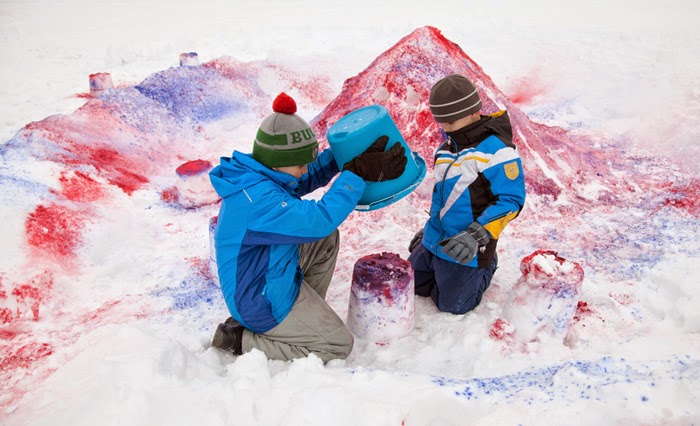 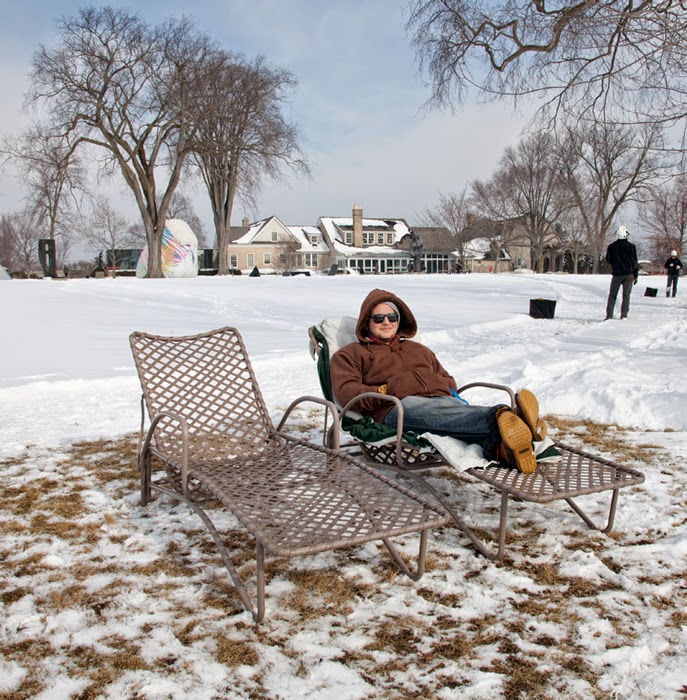 Robbie, a junior at the Milwaukee Institute of Art and Design, could be found reclining in a chaise longue overlooking the frozen pond. Passersby were invited to join him for the conceptual performance piece. 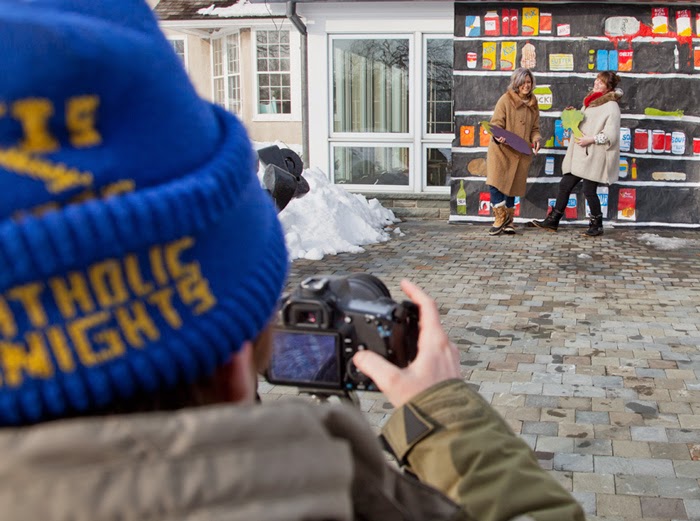 A large hand-painted representation of grocery store shelves served as an informal portrait studio as subjects posed with cut out shapes of vegetables. 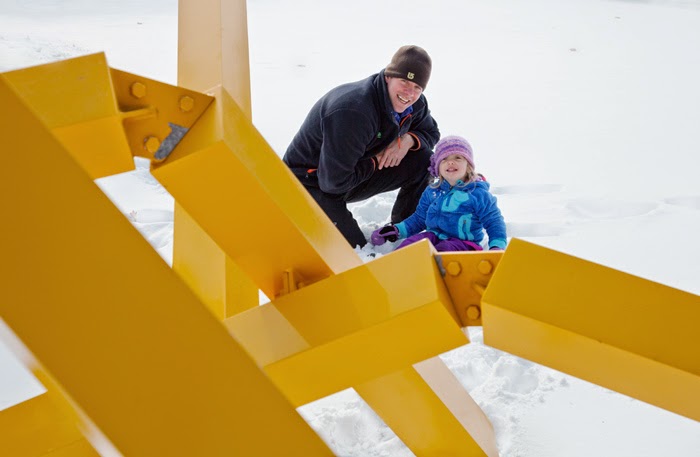 Some folks, like Todd and Aayla, took time to admire the permanent collection of sculptures. There was a “scavenger hunt” to help motivate young and old to identify the artists. This is “Pin Oak I” by John Henry. 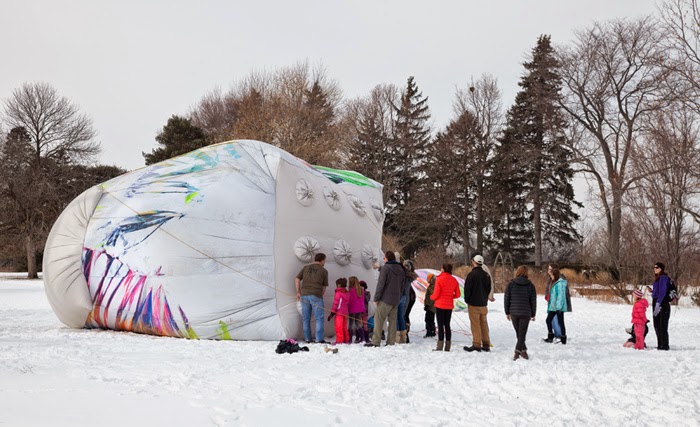 Periodically, the huge “Trojan Horse” was tipped on its side so that a new group of game volunteers could squeeze into it through 12 openings in the bottom. 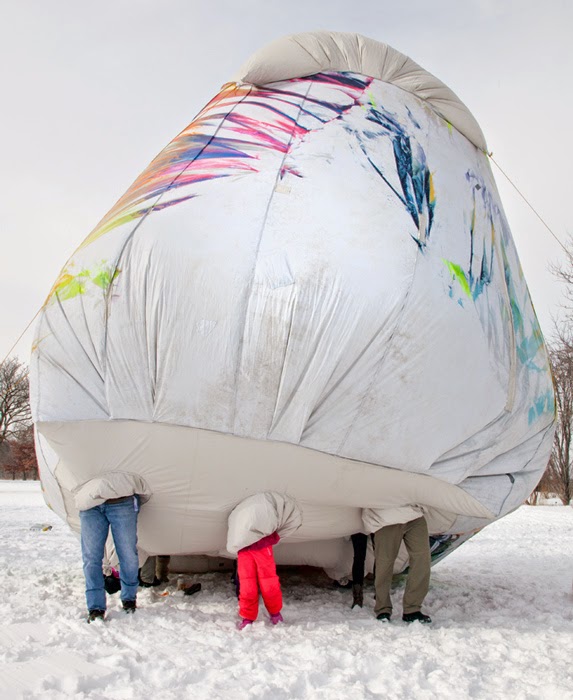 Then off they would go in a lumbering dance to music playing through loudspeakers. Ashley directed the action from the outside by pressing up against the fabric and calling out moves to those on the inside. Hilarity generally ensued. Disembodied voices were heard coming through the fabric along with laughter. “I had the craziest dream last night,” a man’s voice said, “and it turned out to be completely accurate!”

Despite the resemblance, it was clearly more than a circus-like attraction. Enchantment led to thoughtful reflection for more than a few participants. “Talk about an immersive art experience!” exclaimed Kelly as she emerged after her stint on the inside. 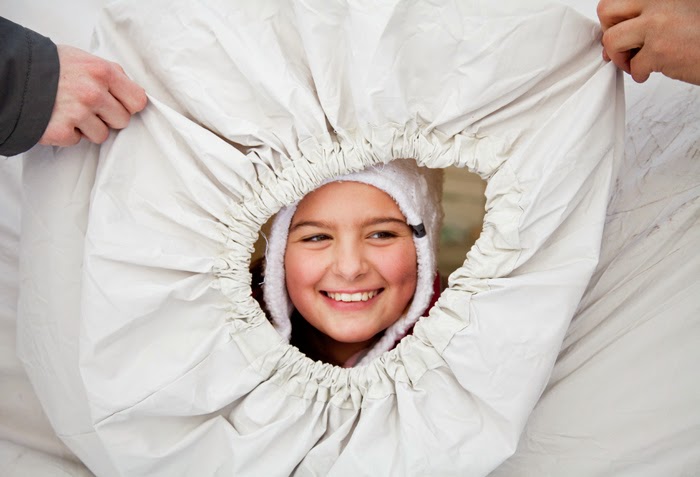 Caroline, when her daughter Luca poked her head out and then squeezed back through the puckered fabric opening, said “It’s like being born again.” 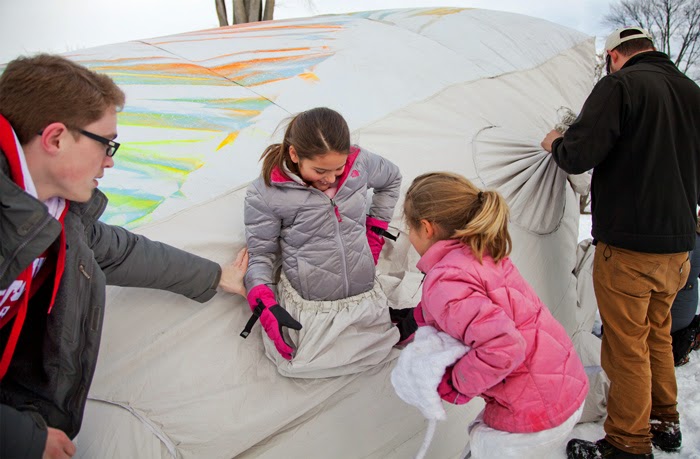 After photographing the action several times I decided to holster my camera and climb inside to see it for myself. The looks on people’s faces once inside ranged from gleeful to awestruck. The fabric that had seemed opaque from the outside glowed like stained glass. Movement was tricky, requiring coordination with 11 other people and faith in those on the outside to guide our blind progress.

In addition to “My Little Pony,” Ashley had brought along two similar but smaller, pillow-like sculptures. Meant for two individuals who would dance around or bump into each other, these were called “Double Disco.” 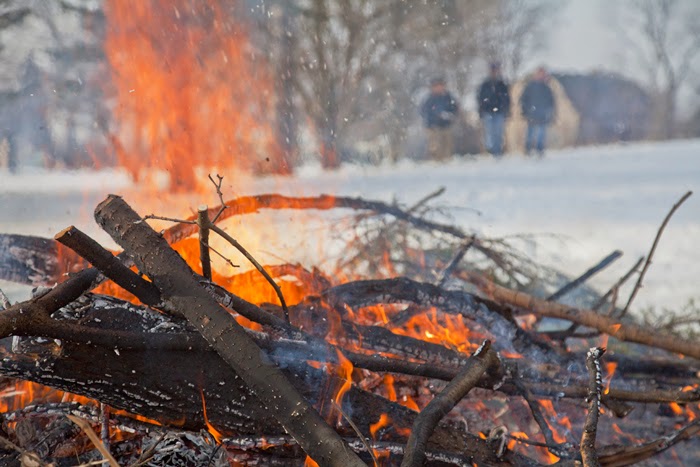 We ended the day by gathering around a bonfire. But, like most of the activities at the Lynden Sculpture Garden, the fire had an artistic purpose as well as a social one. Pegi Christiansen invited people to help her disassemble the “Winter Forest,” remove the branches, weeds and other natural materials from their little shelter and bring them to the fire.

After having been thoughtfully collected from the natural surroundings and carefully arranged into a sculpture, the collective burning had the air of ritualistic celebration. 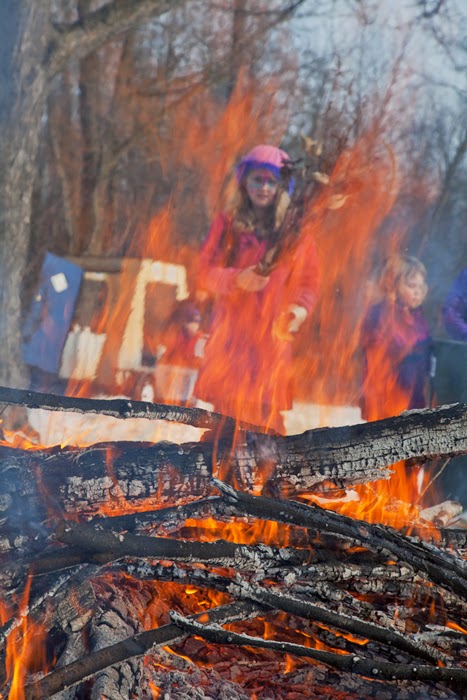 Winter Carnival happens once a year, but the Lynden Sculpture Garden is open 6 days a week and has programming throughout the year. Check the website for more information. Full disclosure: I am one of the Lynden’s 2015 contingent of Artists in Residence. I would also like to thank Rachel Lokken, a senior at MIAD, for her assistance at this event. As indicated, some of the photos are hers. 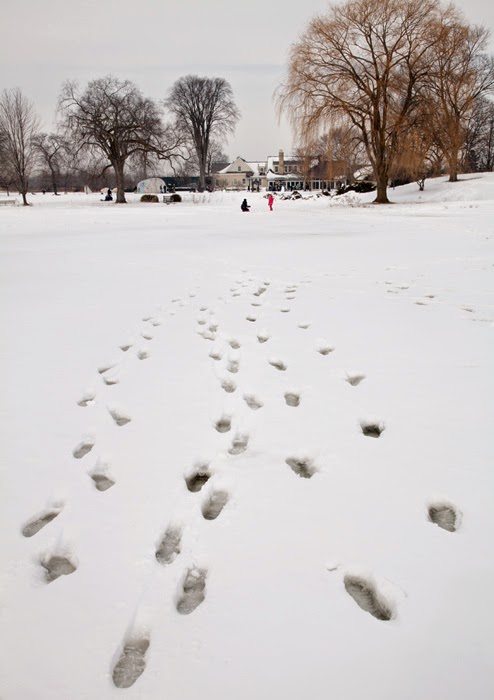