Few things are as subjective as one’s taste in art. I taught art history as well as studio art for many years and in teaching circumstances one feels an obligation to a certain measure of objectivity. And truthfully my tastes in art are pretty diverse. After all, I chose the name of my blog with inclusivity in mind.

Still, isn’t it fun to choose favorites now and then? 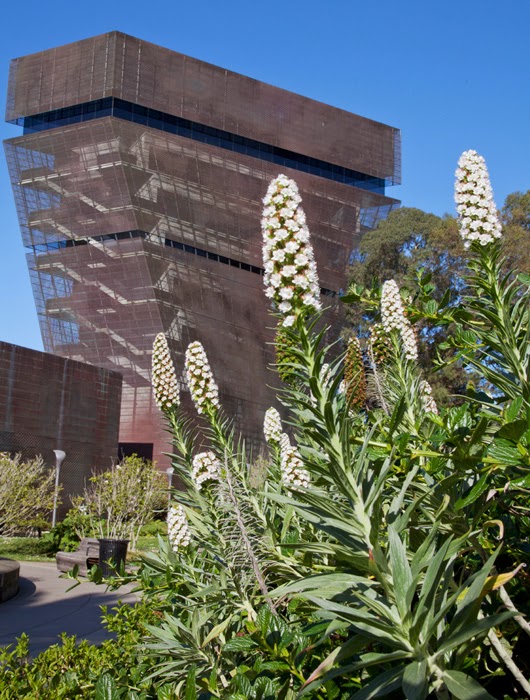 I recently visited for the first time the de Young, half of a pair of Fine Art Museums of San Francisco. (The other is called The Legion of Honor, which houses “4,000 years of ancient and European art.” I missed that one.) In addition to modern art, the de Young specializes in non-European arts and cultures. I offer here an unabashedly subjective selection of a few favorites from the portions of the collection I had time to see.

At the outset I must say that I was quite enthralled with the entire experience, with both the museum itself and with the collections of art it showcases. I would gladly return for additional visits given the opportunity. The museum experience begins on the outside, with a unique architectural design by Herzog & de Meuron. Depending upon your vantage point, the structure can seem dramatic or austere, to stand apart from nature or to harmonize with its landscaped setting. The exterior surfaces are clad in copper still new enough that oxidation hasn’t yet faded its copper penny tones to the green it will eventually assume.

Among the building’s many lovely features are the circular perforations that penetrate the façade in places, allowing light and color from surrounding Golden Gate Park to filter into the interior.

The museum has a relatively liberal policy regarding photography of the collection. I was able to photograph, without using a flash, in most places. Having said that, I could photograph neither my favorite gallery nor my favorite work of art, for different reasons. Of all the sections of the museum, I enjoyed the Oceanic and New Guinea art galleries the most. But they were so dimly lit in order to preserve the fragile work that I didn’t attempt to use my camera.

I have since learned that the de Young’s collection of New Guinea art is both celebrated (no surprise) and controversial. In 2010 the museum was threatened with a lawsuit concerning the provenance of the Jolika Collection of New Guinean art. To read more about the suit and settlement, click here. (The image, left, is from that article in SFGate.)

My single favorite piece in the museum was by David Hockney. “Seven Yorkshire Landscape Videos” is far more complicated a work of art than its title suggests. It is comprised of eighteen digital screens that together span nearly 24 feet. The images on the screens are synchronized to depict a single landscape. (It cycles through seven different landscapes, one at a time.) However, in typical Hockneyan fashion, the images on the screens don’t quite register. Because of that, as well as the motion of foliage blowing in the breeze and the movement of the 18 cameras, the overall effect is just enough off-kilter to be both fascinating and lyrical. As I stood in front of it and raised my own camera, though, the guard stopped me.

Ironic, I couldn’t help thinking, that of all the works of art in the museum the one you cannot photograph is the one that no single image could ever hope to capture. (I found this semblance of it on the LACMA website.)

I’ve always been a fan of Wayne Thiebaud and I prefer his landscapes to the more famous cakes and pastries. It was no surprise to find this native son well represented at the de Young. I found “Diagonal Freeway” most appealing. 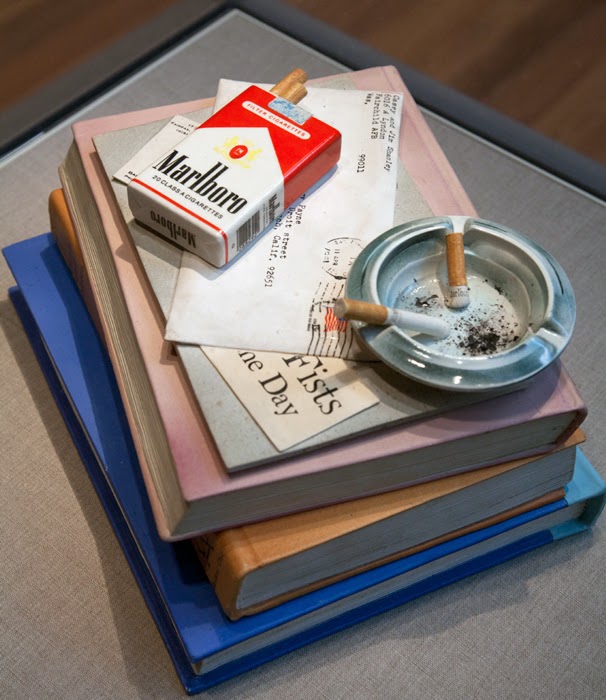 In a room devoted to trompe l’oeil that featured mostly nineteenth century paintings of the usual animal skins and artifacts hung on walls I was drawn to this less common sculptural subject. Made of porcelain by Richard Shaw, its prosaic title, “Book Jar with Ashtray,” implies that part of the top is a lid, though the verisimilitude made it hard to distinguish that. 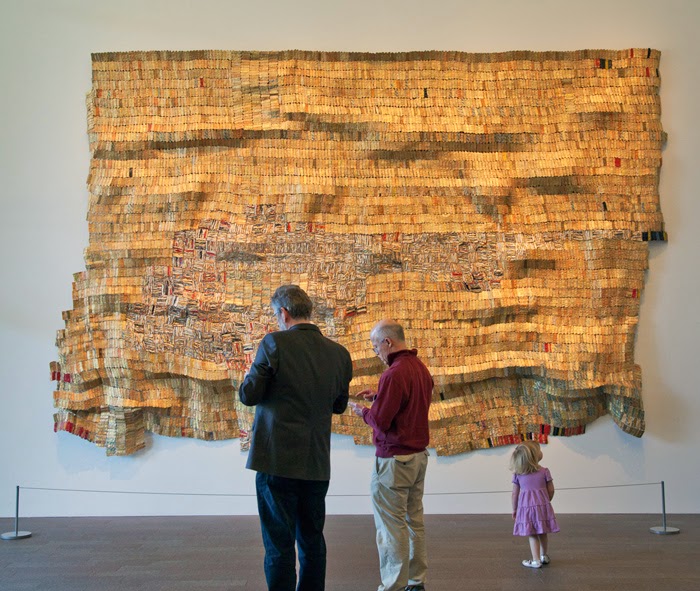 El Anatsui is a sculptor from Ghana. This monumental piece is typical of recent work that resembles traditional African textile design but is made from a variety of metals and found objects. 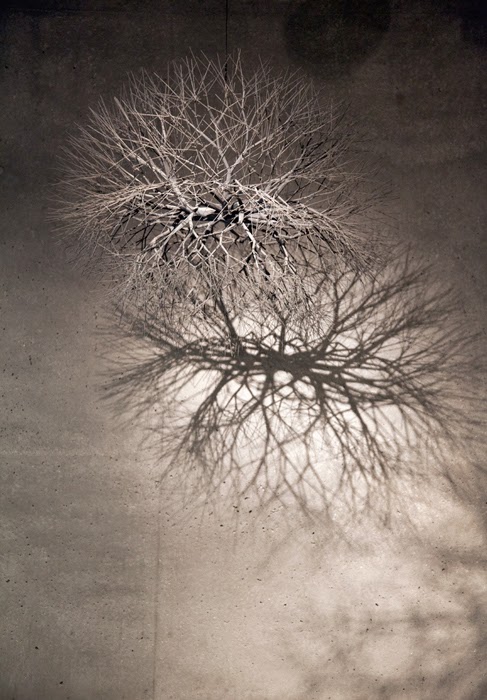 Perfectly situated in the elevator lobby, with its unpainted concrete walls, was a retrospective for a local San Francisco artist named Ruth Asawa who died in 2013. Most of the work involved abstract woven basket-like forms. A few, like this one, represented leafless tree forms either hung from the ceiling or projecting out from the wall, casting evocative shadows on the concrete. 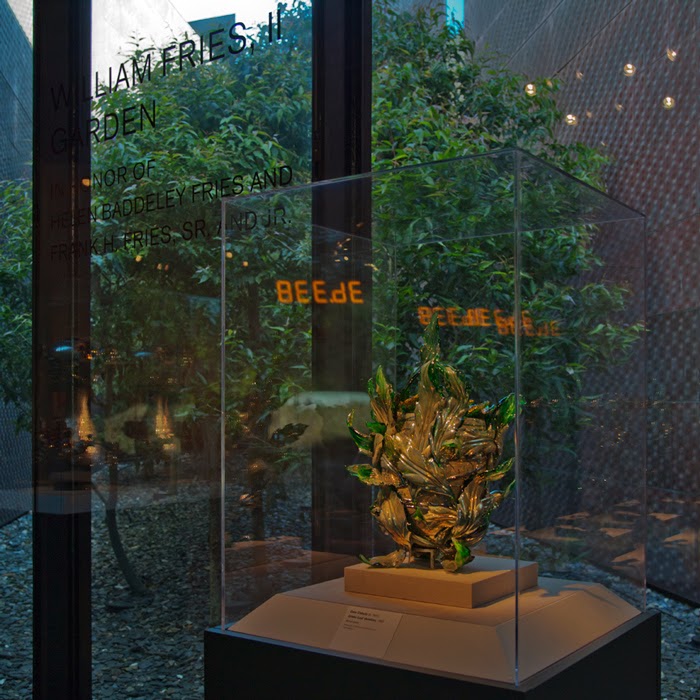 The Chihuly sculpture in this case I enjoyed as much for its juxtaposition in front of the tree visible through the atrium window as for its own qualities. I have a hard time believing that its placement was coincidental.

These are a few that stood out for me that day. I have no doubt that were I to return on another day I would find an entirely different selection, equally fine and compelling. But I must conclude my personal tour with a walk in the garden and a story about seeing one of my favorite artists in a new light, so to speak.

I might have missed the sculpture garden altogether if I hadn’t noticed from the window what looked like the top of a Turrell installation surrounded by an unkempt mount of grassy earth. It brought to mind a tonsure atop a head with dirty, uncombed hair. 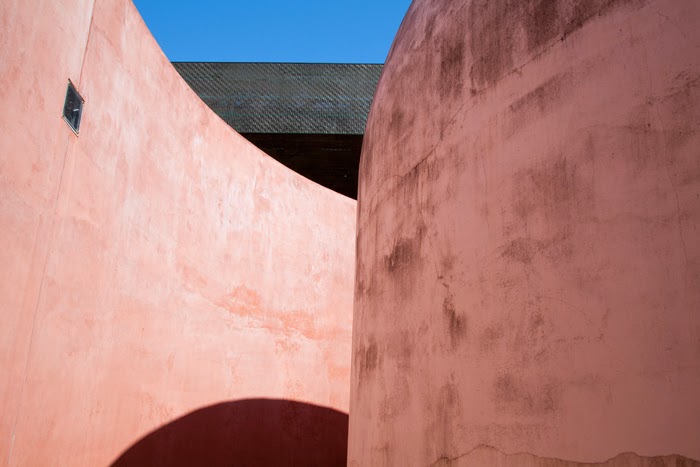 Sure enough, as I walked down the ramp that led to it, a plaque identified it as “Three Gems,” by James Turrell. A tunnel led not directly into the space but into a circular corridor that surrounded it like a moat. The entrance was on the far side.

I sat on the bench that ran around the circumference of the circular interior, admiring the gravity of the space and the lightness of the sky visible through the characteristic ceiling aperture. Much like several similar pieces I’ve visited elsewhere. The rest of my experience was anything but typical. 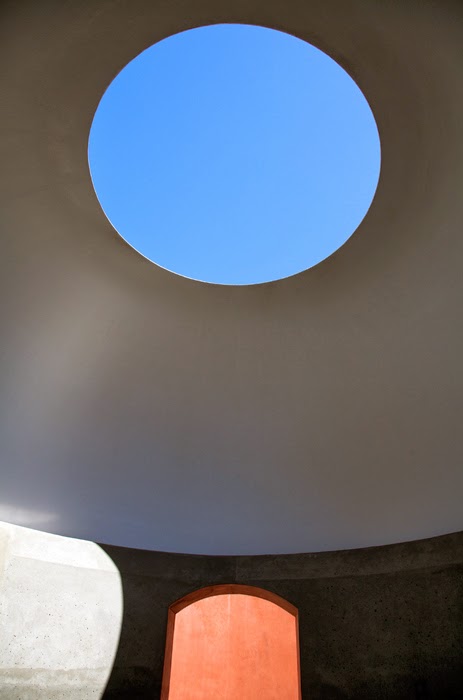 I heard the muffled echo of pounding footsteps hurrying down the ramp and around the “moat.” A girl about nine or ten and an even younger boy appeared in the doorway. Startled by the sight of me, the excitement on their faces was briefly arrested. When I smiled they quickly resumed their enthusiastic entrance, tumbling in upon each other and laughing in delight. The sound of their laughter reverberated off the curved walls. They were clearly familiar with this place and instead of adopting the hushed silence that is typical of adults, including myself, they began to call out as you might in a cave, to hear the echo. Lo and behold, the echo changed as they moved about in the small chamber. In the center, directly below the aperture, the sound deadened noticeably. When they hopped on the bench and ran around it, shouting, their voices boomed.

In its own way it was as enchanting as the silence.

Their young mom appeared suddenly, beckoned them from the doorway. They took off, still laughing and I listened to the fading thunder of their footsteps as they ran up the ramp.

In the ensuing silence I became aware of the muted sounds of traffic in the park; then an invisible jetliner somewhere overhead, not crossing the disk of open sky.

A middle-aged woman stepped partway inside. Avoiding my eye, she looked around—but not up! She backed out again and left.

Finally, four other women of varying ages came in. They crossed through and sat, spreading themselves around the space. The initial hushed silence, most likely in deference to me, led to some chatter and laughing. Again the sounds bounced around the space. Satisfied, I relinquished the chamber to them. Then another surprise: no sooner had I stepped through the tunnel onto the ramp than one of them sang out a single, pure note.

I stopped a while longer, once more entranced. The voice was joined in a chorus of tonal chanting, its resonance lifted on the air through the open ceiling. The solemnness of the vocalizations then shifted as they tried out birdcalls. Like the children before them, they engaged with the chamber using a variety of senses and moods. When I’d had enough, I turned and slowly strolled up the ramp, saluting Turrell for his 3 gems. 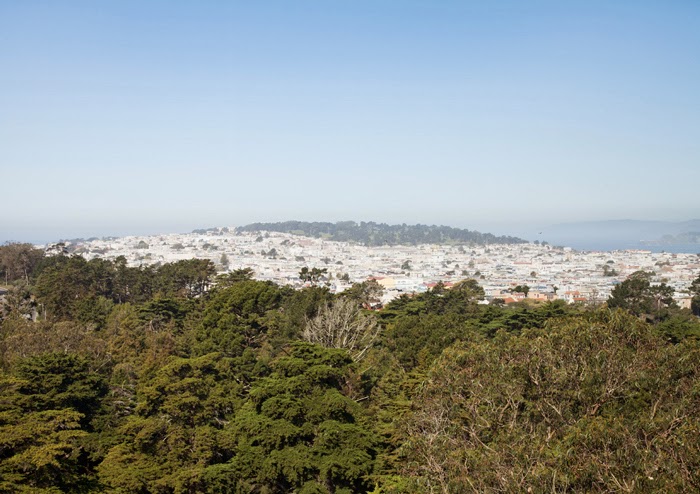 View from the de Young tower looking towards the Golden Gate Bridge (which is in the fog.)

This is the second installment of reflections on art from San Francisco. Click here to read about Di Suvero and the cranes. I have also posted reflections from Muir Woods National Mon. on Urban Wilderness.