The High Line: Good and Bad

It was a glorious fall day, warm with buttery sunlight, as I made my way slowly along the narrow, tree-lined pathway. I was moving slowly for multiple reasons. First, I was enjoying the sunshine as well as my first experience of the High Line. Second, I frequently paused to inspect intriguing details of the park, which include wildflowers and public art, as well as marvelous panoramic views of mid-town Manhattan. Third, I was in a crush of like-minded revelers, an enormous, snaking parade of humanity out to visit one of New York’s newest, most innovative parks. 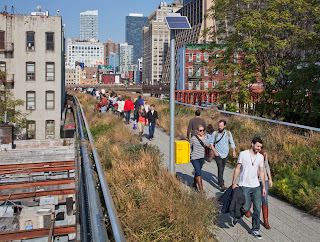 And fourth, of course, I was stopping periodically to take pictures. Like just about everyone around me. Spirits were high and the mood festive. A polyglot cacophony of human voices surrounded me, ebbing and swirling as people passed in both directions. 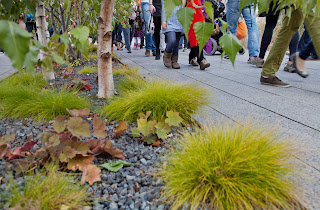 Amidst the many languages and inflected exclamations as I was, I might have passed by without noticing the one installation of public art that had no physical presence. But when I stopped to frame a photograph atop the steel grated “flyover” section of the park I heard a calm, measured voice speaking slowly and deliberately. It was oddly out of sync with the clamor. When I started to pay closer attention I heard the names of animals.

“Cheetah, …goose, …elephant, …hen, …lion, …mongoose,” intoned an invisible voice. The narrator paused and pronounced, “Bad animals: …spider, …bat, …shark, …head lice, …cockroaches….” The speaker must have been hidden under the walkway. Upon nearing it an expression of curiosity would appear on people’s faces and they would slow to figure it out, as I did.

I waited for it to cycle to the beginning: “Good animals: …penguin, …turtle, …swan, …house cat….”

A distinctive circular sign on the railing informed us that it was one of the many public art projects along the High Line, a sound installation by Uri Aran called Untitled (Good and Bad). I wondered how Aran decided which animals were to be considered good or bad. In my own opinion, a couple of the “bad” ones—bats and sharks—have gotten bad reputations for various reasons, but prove beneficial upon objective observation. And at least a couple of the “good” animals—geese and raccoons, for example—often are considered pests.

Then there’s the ambiguity of “goodness” itself. Listed among the “good” animals, the qualities of a rhinoceros look very different to a safari hunter, a naturalist, and a poacher intent on cashing in on the horn.

On another level, every kind of animal has its appropriate niche in the interconnected web of life—even head lice, I guess! The artist, according to the description on the High Line website, is trying to “spark dialogue about the arbitrary nature of classification in language.” It certainly spurred an internal dialogue for me, one that continued beyond classifications and even linguistics.

The context of the piece, situated as it is at the center of the High Line, led to a larger question in my mind: Can nature be considered “good” and “bad?” Or, more fundamentally, what is nature? The High Line is one of the most unnatural places ever to have been conceived as parkland. Yet one of the amazing things about it, I think, is that it was inspired by nature; by what was perceived by some as wilderness taking over an abandoned elevated railroad.

Are there “good” and “bad” parks? The masses voting with their feet have clearly proclaimed the High Line “good.” I concur. By contrast, some parks, considered unsafe, are shunned by the general public. However, those parks are more likely to be refuges for wildlife. This also seems like a good thing to me. Good animals? Bad animals?

During the past week I spent four days walking and photographing the High Line. Time well spent, I believe. The park is a remarkable accomplishment. But, although it was inspired by the kind of urban wilderness to which I am usually attracted, it can no longer be called one. The website says that the landscape design is “reminiscent of the quiet contemplative nature of the self-seeded landscape and wild plantings that once grew on the unused High Line.” Emphasis mine.

What role should an urban park have in bringing the experience of nature to the citizens of any city? Followers of my Urban Wilderness blog know that I am fully committed to urban parks that enable connections with nature. There has to be room for a variety of experiences and a spectrum of natural features, from formal gardens to outright unmanaged “wildernesses.” New York happens to be large enough to accommodate both. The High Line is a hybrid, exquisitely designed and carefully controlled.

Public art is a significant feature of the High Line’s program, but I submit that the High Line itself is a work of art that will always transcend the installations on and around it. The High Line elevates questions about the intermingled roles of art and nature to a unique level. Pun intended.

This is the first of what I expect will be at least a few meditations on my experiences this week on the High Line. And a lot more pictures. I hope you’ll stay tuned. 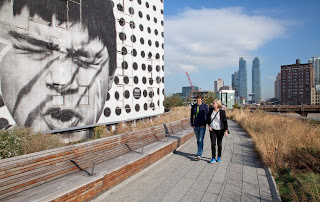