The Milwaukee Art Museum opened its remarkable exhibit of Taryn Simon’s photography in September. With three impressive bodies of work of an important contemporary photographer, the show brings to Milwaukee work that is both significant and insightful. If you haven’t gone to see it yet, do so.
The Innocents by itself is worth the visit. Simon’s portraits of people who have been convicted wrongly of crimes are powerful and challenging without being melodramatic or disturbing – although the stories that accompany each image should disturb and outrage anyone with a conscience. It remains on view through January 1, 2012.
If you are traveling to Chicago, a concurrent exhibit at the Museum of Contemporary Photography bookends the Simon show nicely. A group show called Crime Unseen has related themes. (In fact homage to Simon is paid by including one of her Innocents images.) Apparently, for contemporary photographers, crime not only pays – as dividends in art world caché – but also is in fashion.
From the exhibition text:
“All of the artists in Crime Unseen grapple with a retelling of disturbing crimes. Using photography and other methods, the artists reactivate historical material and open it up to further contemplation. By drawing on techniques of photojournalism, forensic photography, and documentary landscape, the artists actively engage with myth and reality as they question the roles of memory, the media, and evidence in solving and remembering crime.” 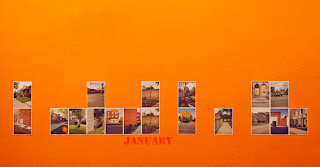 Detail from Killing Season: Chicago by Krista Wortendyke shows one of several series of images of crime scenes arranged to resemble the skyline of the city.


“All of the work in this exhibition has tragedy at its root; every artist deals with materials and stories that stem from extremely serious crimes and real murders of real people. Yet they approach the idea of violent crime obliquely. There are no graphic images of real dead bodies here. The artists did not witness the crimes, and their photographs were all made after the crimes occurred—in most cases, long after. …Partly as a rallying cry against forgetting, they confront us with our perverse attraction to horror by skirting it slightly, bringing stories back to life, and demonstrating that the evil side of human nature unsettles our fundamental notions of security, humanity, and control. …By transforming history into something new and current, the artists discourage us from being passive and distant, and in so doing perhaps leave room for an implicit, liberating acceptance that human nature is sometimes unpredictable and flawed.”
The work is intriguing, if not as powerful and compelling as Simon’s. But I take issue with the last statement above. If there are flaws in human nature, so too in the “passive and distant” stance taken by these and many contemporary artists. The photography is technically excellent and conceptually engaging, but unemotional.
Perhaps it is a reaction to tabloid journalism with its devotion to graphic depiction and lurid detail, but contemporary artists can go too far with their “oblique” approach and banal aesthetic. If they wish to “confront us with our perverse attraction to horror” I think they just might want to skirt it less slightly. Taryn Simon’s work balances on that edge beautifully. 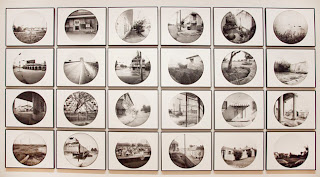 The circular images in Tooth for an Eye by Deborah Luster are intended to mimic the shape of a gunshot hole or the view through a gun sight.

However, it’s a strong show and worth checking out for yourself sometime before it closes January 15. The MOCP website has a thorough description of the show.
Posted by eddee at 8:16 AM