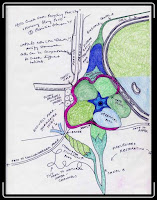 In 1969 Patricia Johanson, inspired by close observations of the natural world, made simple pencil drawings of animals and plants in sketchbooks and on loose-leaf pages. Copious notes written in casual long hand surrounded the drawings. Johanson had a vision for designing artworks that were not merely representations of nature – what is more common than that? Nor was her idea to reflect on or abstract those sources.
Johanson, in tune with the Zeitgeist that led to the first Earth Day in 1970, wanted nothing less than to heal the earth using art.
She has been doing just that for decades now, often on a monumental scale.
This past Wednesday, the Overture Center for the Arts in Madison, WI hosted Johanson for a talk entitled Science, Art, & Infrastructure. The event was sponsored by the Design Coalition Institute in partnership with UW-Marathon, UW-Madison, and UW-Extension.
Beginning with the humble ideas sketched so long ago, Johanson, who subsequently received a degree in architecture, went on to describe several of her major completed projects.

The Dallas Museum of Art is situated picturesquely on Fair Park Lagoon. Water quality in the lagoon, however, had been so badly degraded over the years that it was biologically dead. Johanson’s solution was a sculptural design based on plant forms that simultaneously buttressed eroding banks and created a series of microhabitats. Unlike most public sculpture projects, the obvious concrete structures are only the most visible tip of the iceberg. Native aquatic plants and animals introduced into the newly rehabilitated environment are as important, if not more so.
Not coincidentally, the sculpture doubles as a playground and outdoor classroom for people young and old who visit the newly invigorated site.
Scranton, Pennsylvania provided Johanson with one of the most daunting challenges: a landscape utterly ravaged by coal mining. She outlined the historical background, which includes human suffering along with environmental devastation. The many levels of now abandoned underground mines have become a defacto reservoir into which all surface waters, former streams, etc. have disappeared.
Her designs are sensitive to this history as well as current conditions, the needs of the local community, and the intention to help ameliorate environmental problems.

This aerial view of the water treatment facility under construction in Petaluma, California gives a sense of the enormous scale of some of her artistic accomplishments.
Aside from sheer wonder, delight, and appreciation for Johanson’s work, there were four main points that struck me:
This is work that requires enormous amounts of research and cooperation for it to be successful. No amount of self-reflection in the studio can produce such far-reaching and practical results.
Johanson reiterated several times the need for community involvement. She was not there, in whatever the location, to impose an aesthetic concept on the land. She listened to the public and the local stakeholders and her designs respect their needs as well as her own creative imagination.
The third point is sadder, I think. Her presentation as well as her work reminded me of Betsy Damon, who had given a talk at UWM a while ago. Afterwards, I asked Johanson about Damon. Unsurprisingly, they are friends. She went on to say that there were only a few like-minded artists doing these kinds of projects that combine imaginative artistic design with actual restoration and bio-remediation – and they are, like her, all getting along in years.
Young artists are not uninterested in the environment, she said, but they tend to want to draw attention to places or frame issues rather than dealing directly with healing the earth.
There were many young people, university students no doubt, in the audience. My hope is that some of them heard her message and found her example inspiring enough to turn that around.

Finally, as I did when I heard Damon speak, I couldn’t help wishing there is a way that one of these artists could be brought to Milwaukee to do their creative and restorative work. The Menomonee Valley would be the perfect location.
Project descriptions and more images can be found on Johanson's website.
Posted by eddee at 9:10 AM