Another busy weekend on the art scene. Botanical blockbuster at the Milwaukee Art Museum, of course. (See previous post.) While that was fun – and a great way to attract a crowd to see great art – I also enjoyed a couple more modest exhibits of work with a social conscience. 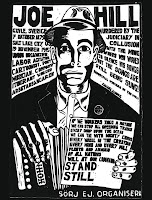 Friday evening I started out at Walker’s Point Center for the Arts for the opening of “Carlos Cortez and Allied Artists.” Cortez, who died in 2005, was a prolific printmaker and indefatigable advocate for immigrants, the working class, and social justice. In addition to his personal activism, he influenced the work of many who followed, some of whom pay tribute in this exhibit. The exhibit organizers must be very pleased with the unexpected topicality of this show, given recent events in Madison. It runs through May 14.
Next I stopped at Gallery 2622 in Wauwatosa where Marianne Huebner, an art therapist at Children’s Hospital, is exhibiting her own work in a series of large mixed media paintings. Unlike most artists, whose efforts to express themselves in ever more novel ways often lead to self-indulgent excess, art therapists choose to use art as a tool for healing others. Art is created for the benefit of people in some kind of distress. The show runs through April 30 and the gallery will be open for the Westside Art Walk, a good time to check it out.

When I got home it was still early, so I popped in my Netflix DVD of the Oscar-nominated documentary Waste Land. It documents a project by Vik Muniz that takes art that can help others to a new scale, literally.
Zumbi is a picker. He lives in a favela (slum) near Jardim Gramacho, the world’s largest landfill, in Rio de Janeiro. Every day he joins an army of 2,500 who pick recyclable materials from the garbage. It is hard, smelly, dangerous work. Zumbi is also a philosopher. He rescues – and reads – books that have been discarded. He’s read Nietzsche and Machiavelli. He sees similarities between the medieval fiefdoms of Machiavelli’s princes and the turf wars, gangs, and drug lords of Rio’s favelas.  Zumbi dreams of creating a library for the community of pickers.

Waste Land tells the story of Zumbi and other pickers whose lives are transformed by an artist who grew up in a favela in Brazil and who wants to give back. Vik Muniz is now a very successful artist in New York with an international reputation. He has long made art from unconventional materials. Inspired by the landfill, he befriends the pickers and makes enormous portraits using them as subjects and their work – the recyclables gleaned from Gramacho – as his art materials. The results astonish everyone and transform Muniz as much as the people who become his collaborators as well as his subjects.
The inhuman scale of Gramacho is replaced by the individual lives of Isis, Tiao, Zumbi, and others who become monumental works of art. Along the way Muniz has to struggle with the impact he is having on them, whether it is ethical and sustainable.
To learn more, go to Waste Land. And put it on your Netflix queue.