Ever more popular when the weather is nice, you know Milwaukee’s quarterly gallery night has reached critical mass when galleries are packed despite miserable weather, as happened last Friday. I made out a list of places not to miss and got so caught up at some of them, I had to miss a few anyway! 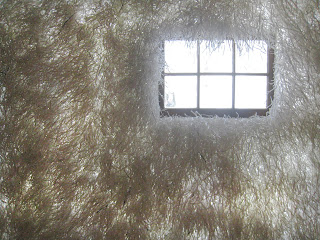 Tipped off by Sara Mulloy at Art City, I started my evening at Dean Jensen Gallery where a delightful and engaging little house inhabits the space. From a distance the exterior appears to be glowing fur. Moving closer one finds gently waving strands of shredded paper painstakingly attached to the surface, which is backlit. One enters as if into a tiny but brightly illuminated country chapel. Numerous small niches, like reliquaries, contain diverse images and remnants of trees. It manages to harmonize a spiritual connection to nature with intellectually stimulating scientific concepts – no mean feat!


I had my portrait taken by Carly Huibregtse and added to her clever Arnolfini Photo Booth wall. 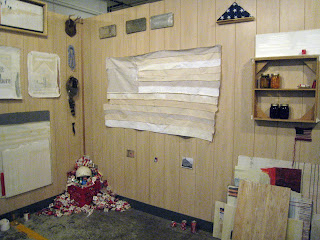 E. “Marshie” Marshall’s installation is a witty amalgam of references to Johns, Warhol, Rauschenberg, and other pop iconography. 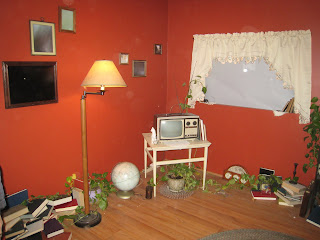 In a far corner of the fourth floor, a dark, but cozy room appointed with mundane family treasures evokes a nostalgic past. The simply framed images scattered randomly around the walls contradict the illusion, depicting only an immaterial fog. Identified as a photographer, Rose Tarman admitted that she wasn’t certain how to categorize her work – more art without borders! 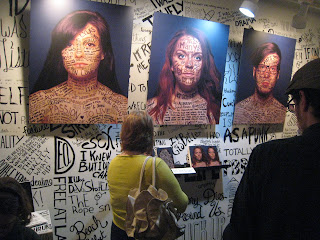 My two personal favorites have one thing in common: larger than life portraiture.
KT Schramm draws us into a sobering expression of interior darkness. Her personal hell is expressed through enlargements of simple college ID portraits that have been violated, vandalized with intimate, diaristic ramblings about her struggle to remain whole in the face of a relationship stained by drug addiction.
Deb Leal’s enormous faces force viewers into an uncomfortable confrontation with calm but ambiguous expressions that suggest a conflation of sexuality and violence. The MIAD thesis shows (which include graphic design, illustration, interior design, and many other disciplines) will remain on view through May 15. You can go see them without the crowds. 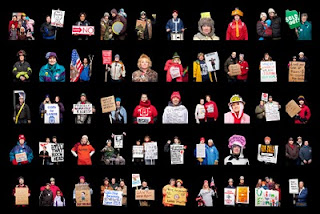 I made it out of MIAD with barely enough time to make a quick trip to the Marshall Building, anxious to catch Kevin Miyazaki’s work at the Portrait Society Gallery. Like so many artists, Kevin spent a lot of time in Madison during the recent weeks of protest against Governor Walker’s budget proposal. He took along his discerning eye and his camera and returned with a compelling and occasionally wryly humorous series of portraits of the people he met there.
Finally, my anxiety peaked in the appropriately sepulchral installation at Merge Gallery dealing with … anxiety. Bookending my gallery night pilgrimage was another confined space reminiscent of a chapel, this time a more somber one rife with psychological pain. Typically, gallery owner Val Christell combines imagery and text with great facility. A participatory element encourages visitors to leave their own reflections among those of famous authors – and those spontaneous expressions are as powerful as the prepared ones. I will close with one of the quotes:
“We all wear masks, and the time comes when we cannot remove them without removing some of our own skin.” – Andre Berthiaume
Posted by eddee at 5:18 AM