100 acres of art and nature in Indianapolis 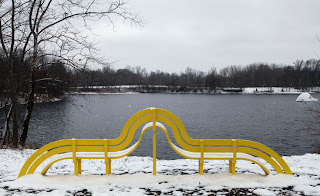 One of 15 unique benches, by Jeppe Hein
Contemplate this phrase: art and nature park. Consider how that might differ from this more common phrase: sculpture garden. At the newly opened Virginia B. Fairbanks Art & Nature Park – usually referred to simply as 100 Acres – the difference is both real and, more importantly, intentional. According to their mission statement, the park’s art works and programming are “designed to strengthen the public’s understanding of the unique, reciprocal relationships between contemporary art and the natural world.” If the mission is implemented as intended, this goes well beyond the placement of art in a carefully designed landscape, which is what happens in even the best of sculpture gardens. (If you’ve been following ArtsWithoutBorders for long you know I love sculpture gardens. See links below.) 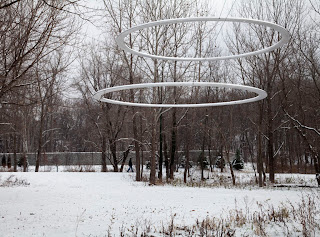 Team Building (Align) by Type A (foreground) with Park of the Laments (background)
100 Acres combines aspects of the traditional sculpture garden with aspects of the traditional nature center. The result, it can be hoped, will be anything but traditional. In fact, their mission goes on to say, they expect that some visitors will come with an aesthetic eye for art and some with a scientist’s or naturalist’s eye for the landscape. But – and this is what intrigues me most – they say that while “projects in 100 Acres will accommodate and mix these agendas in surprising ways,” sometimes the revelation will be that “the categories are artificial.” (emphasis mine.) 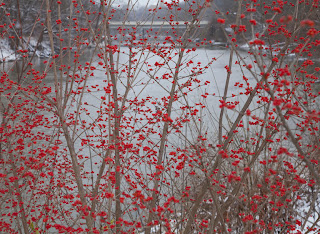 View of the White River
In the mid-19th century, Thomas Cole and the took a cue from Thoreau and the Transcendentalists. artists didn’t choose the landscape merely because it offered a rich source of subject matter – that had been done before. They expressed a deeply held belief in a harmony of the human with the natural world. Furthermore, their concept exceeded previous notions in Western art of this relationship to include wild nature as well as the more traditional pastoral landscape. They succeeded in breaking down a few artificial categories and pointed the way, as art can do so powerfully, towards a conservation movement that was just beginning to emerge in isolated pockets like ’s . Some of these artists became standard bearers who revealed distant wonders of the American West to an astonished public and helped convince congress to establish the world’s first national park at . 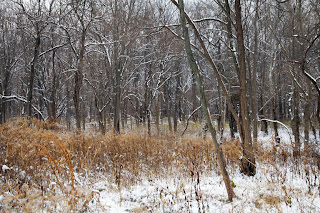 A section of woodland
At the beginning of the 21st century we may be at a similar nexus of understanding about our relationship with the natural world. As an artist concerned about the environment, I visited 100 Acres last weekend with great anticipation, for I believe in that power of art and I believe that we must break down the divisions that result from seeing in terms of categories. If the world needed a park like in the 19th century to spark the preservation movement, it needs urban parks now to bring home to city dwellers the immediacy of their relationship to the earth. Art can – and should – speak to that relationship. 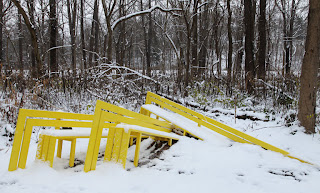 Another of 15 unique benches by Jeppe Hein
I arrived the day after the first significant snowfall of the season. Light flurries softened the stark, leafless scenery. I had to imagine how beautiful it would be in the full foliage of summer, but the wintry character held its own – and I had 100 acres of woodlands bordered by the nearly to myself. I would have been happy even without the art. In fact, if you plan to go there just for the art you might be surprised to find so little of it. The work of eight artists is currently installed, mostly clustered somewhat randomly in one corner of the park. All are described as temporary site-specific commissions (and the park intends to proceed with a regular program of such temporary works – in contrast, once again, with the traditional sculpture garden.) However, when I think of temporary installations, nothing comes to mind like this mammoth piece, entitled Park of the Laments, by Alfredo Jaar. It is as wide as a football field, solid as the monastery walls that it evokes. Inside it has the meditative stillness of a cloister, one topped, however, not by the spires of a cathedral but the black trunks and twisted branches of winter-stripped trees all around. 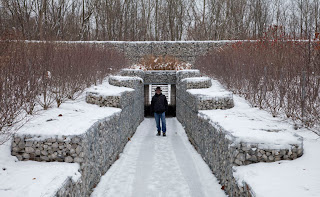 Park of the Laments by Alfredo Jaar
I’ve promised myself I’d keep my posts brief, and I’m trying. I hope this teaser will encourage you to check out the website and, someday, to visit 100 Acres. Oh! I would be cruelly remiss if I didn’t add that this wonderful park is located adjacent to the Indianapolis Museum of Art (IMA), which is definitely worth a trip in itself. They have a fairly standard, encyclopedic collection of western art – but the examples are a cut above average. I found their gallery of African art to be especially exciting. After my excursion in the park, I didn’t have time to do this collection justice, so I have two reasons to return. The other is to see what new commissions appear in 100 Acres. 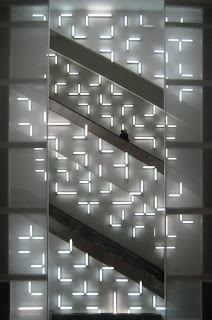 Light and Space III by Robert Irwin in the escalator atrium of IMA
Related posts:
,
and ,
Posted by eddee at 9:07 AM