Have you heard the one about the sculptor who sits on his shipwrecked sailboat waiting for other boaters to come to his rescue? Only it's not a shipwrecked sailboat, but a sculpture that looks like one? It's not a joke.
Or is it?
Julien Berthier decided to make a sculpture that resembles a sailboat about to sink. As you can see from the image, it's very convincing. According to reports, when he takes his sculpture out for a ride (it is fully seaworthy and he can pilot it) he is the frequent recipient of attempts to rescue him from his distressed situation. As you can imagine. 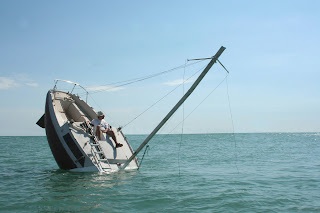 OK, it's clever. I wonder, though, was it worth the effort? It's kind of like a very expensive and elaborate visual pun, a one-liner. Or is there something more to it that I'm missing? Is this Surrealism's postmodern offspring, something that owes a debt to Magritte? Maybe he should title it "this is not a shipwreck." Below is what it looks like in a gallery setting. Not quite the same effect. 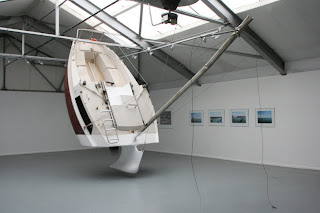