Grand Rapids, Michigan, a haven for art - who knew? 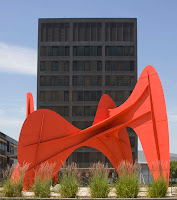 I had reason to believe that I would find Grand Rapids, MI a good destination to find art. I’d read an article in the NY Times about their brand new art museum, which is touted for its “green” architecture. What I didn’t expect was the wealth of public sculpture to be found in addition to the museum, beginning with City Hall. La Grand Vitesse (right) by Alexander Calder makes bearable an otherwise vast empty concrete plaza in front of the all-too-common International Style steel box. There’s something about these Mies-inspired black boxes of architecture that invite Calder’s bright, organic forms—they need the contrast to provide a sense of humanity! From there, using the guidebook provided by my hotel, I took a walking tour of downtown to view other public artworks.

But the most astonishing discovery was on the outskirts of town: the Frederik Meijer Gardens & Sculpture Park. I soon learned that this is one of the region’s primary attractions—and for good reason! A different interpretation of “green”, it is—as the name signifies—a combination of the traditional botanical garden and sculpture park. At 130 acres it is large enough to handle both missions with grace and the mix is a treasure to behold! Of that total, over 30 acres are set aside for an eclectic mix of outdoor sculptures by important artists from August Rodin to Keith Haring. A special children’s’ garden includes some pieces that are more accessible to its audience of future art patrons, but some abstract works are thrown into that mix as well.
But wait!…there’s more: In addition to the permanent collection—which in itself would have been enough to warrant an overnight visit to Grand Rapids—there is always a guest artist who is invited to do site specific installations for a season. The current installation is A New Eden by Dale Chihuly. I love Chihuly’s glass work and I thought I knew what I would be seeing. I’d been to Garfield Park Conservatory in Chicago a few years ago when he did an installation there. Here, as there, one enters through the typical greenhouse setting (smaller than Milwaukee’s domes) and I did recognize Chihuly’s motifs. But once I got outside I was unprepared for the scope and variety of his installations, which were done not only within the confines of the sculpture park, but spilled over into the natural areas as well. It's hard to describe the impact of seeing monumental glass in the landscape. The contrast of its fragility and luminosity with the scale and context is breathtaking. Pictures tell this story better than words. I invite you to view a photo essay by clicking over to my flickr page. This teaser is called Red Reeds. There are 500 of them: 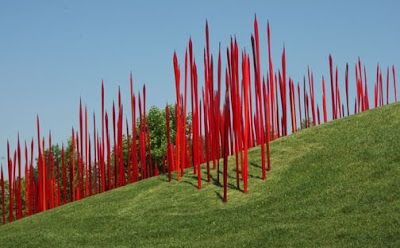 How ironic that just last week I posted a complaint about having to miss the opening of the new Indianapolis sculpture park. I did miss it so I can’t compare, but this was a very satisfying alternative. In fact, although I did enjoy the art museum too, it played second fiddle, I’m afraid. 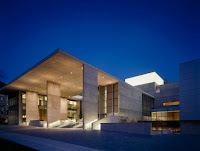 I can’t comment on how “green” the architecture of the Grand Rapids Art Museum is either. This healthy trend in design and construction of buildings has no identifiable style and the GRAM, as it is called, is a subtly elegant and airy variation of a modernist concrete box. The galleries are spare and simple, which allows the art to take center stage. Before describing the art, however, I would be remiss if I didn’t mention the one most distinguishing feature of the GRAM. Neither aesthetic nor spatial, but a social phenomenon: when was the last time you were in a museum where every staff person without exception, including all of the gallery guards, greeted you warmly as you entered the room? Guards, in particular, are typically either mute, passive human furniture or furtive and suspicious. Not at GRAM. It has to be a deliberate policy—a cultivated friendly small city culture. Nice.
The current exhibition is called Dutch Utopia: American Artists in Holland, 1880-1914. It chronicles the work of American artists who lived and painted in six art colonies in Holland during those years. It includes a few familiar figures like Robert Henri and John Singer Sargent, but mostly less well known artists. Perhaps in reaction to the tumultuous and controversial experimentation of the post-Impressionistic / Fauvist avant garde of the period, this work is academic and nostalgic; the subject matter heavy with tulips and religious themes. Utopian by definition is an attempt to escape external reality for an imagined one. I guess New York and Paris were a bit too real for these artists. On the other hand, it is a welcome reminder that multiple realities can coexist in art as well as life. Henri, for one, returned to the streets of New York to find lasting fame with the "Ashcan School" of painters. The friendly receptionist told me that the show has been very popular (perhaps for the same reason?), but the permanent collection, which is a diverse survey of mostly American art, I liked better. It includes many of the usual suspects, from Charles Burchfield to Willem de Kooning, but much of the work is refreshingly atypical. I particularly liked Ingleside by Richard Diebenkorn, from 1963 (below). 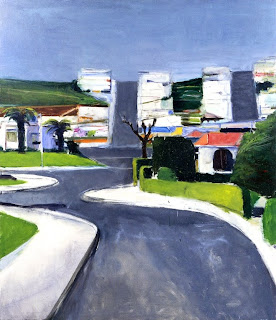 Ah, but it was in the print study room, off to the side of the main galleries, that I found real treasures. An exquisite etching of the Crucifixion printed by Rembrandt himself (according to the friendly staffer) greeted me as I entered. Along one wall was a complete set of 16 tiny etchings by Dürer showing the Stations of the Cross. To see original work by either of these masters is always a delectable treat to be savored.
Grand Rapids, Michigan: a destination for art lovers. Who knew?
Posted by eddee at 6:37 AM