It rained the whole week I was in Helsinki. While that cramped my desire to explore the city's parks and open spaces, it enabled me to visit quite a few museums of various stripes. Three art museums had the most appeal and I offer a sampling from each. More often than not the majority of works on display were of Finnish origin, which made them completely new for me. I consider this one of the more delightful perks of foreign travel.

The Helsinki Art Museum is devoted to art works that "belong to the people of Helsinki." A lovely collectivist notion.

An enormous photographic print that depicts what must be a fantastically imagined landscape. It was eerily real, however.

This appealed because I'd been seeing similar Finnish style architecture all around the city. The title is a curiosity, but then I've never been to Finland in another season.

This was a bit reminiscent of Jeff Koons. The larger-than-life size figure was like a fairy tale figure brought to "life" as a sculpture. The title reflects not just the color but the velvety texture of the surface of the sculpture.

Somehow I missed the English title of this, which in both Finnish and German is a long one. My German is rusty but it goes something like: "I will be mixed up when I stop being reasonable." There were several similarly abstract and enigmatic paintings by the same artist.

While I never personally experienced this degree of dystopic environment, either as a young person in school or as an educator for 30 years, somehow this resonated.

There was a whole room devoted to this artist, including the large paintings as well as this one installation, which suggests that the socialization required of school attendance entails a loss of innocence. Those are teddy bears and other stuffed animals strewn out behind the building. 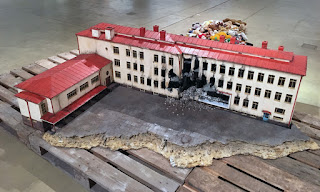 This is the same piece viewed from the "front."

The Ateneum Art Museum is one of a triumvirate of institutions comprising the Finnish National Galleries of Art. It is devoted to 19th and 20th Century international art. It was here where I found a few recognizable names, even if the art works themselves were unfamiliar...

... and in a few cases unlikely to be found in most major U.S. museums.

I discovered that the Romantic landscape--a la our own Hudson River School, so recently featured at the Milwaukee Art Museum--is also a prominent genre in 19th Century Finnish tradition.

Many of the paintings from this land of forests, mountains and lakes are indistinguishable in content and character from those of the American West.

A curiously titled abstract sculpture in high relief. The lattice of welded copper covering the wire-frame figure didn't resemble lichen to me, but I found it intriguing.

Coincidentally, the major current exhibition was a retrospective of Alice Neel, who, the catalogue claims, is "one of the most significant American painters of the 20th century."

Okay, I've heard of Neel and had a memory of what her painting style looked like. But these were by far the most of her paintings I've seen in one place. 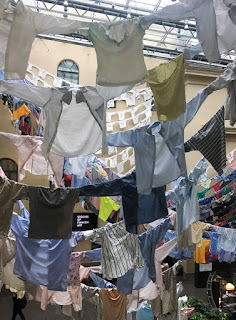 My favorite work of art at this museum was "laundry" hanging in the atrium of the building, seen here from a second story window overlooking the courtyard. I couldn't locate a label for the installation and so I don't know the actual title.

Helsinki has a wealth of diverse museums and art galleries and I didn't manage to get to all of them. But of those I did see my favorite was the Kiasma Museum of Contemporary Art.

The website describes it this way, "A lively cultural centre and meeting place, Kiasma is the place for pleasure and experience. The name derives from ‘chiasm’, which stands for an intersection, particularly the crossing of optic nerves." I went on a weekday morning and found it not only lively but also family-friendly. In fact, I'm quite sure I've never seen so many young children in a museum devoted to contemporary art.

The two little girls on the right are peering through an aperture in the giant knit cap where they can see that the interior is filled to capacity with over 60 life-size wigged heads.

In fact, nearly all of the most enjoyable installations, many of which took up entire rooms, were so vast and interactive that a still image will do them no justice. So, I made short videos (Ha! I can do that with my phone now! Even when my phone doesn't work as a phone, as in Finland.) So, I recommend that you ignore the still images below and click on the Youtube links associated with them. They're all short, under 1 minute. 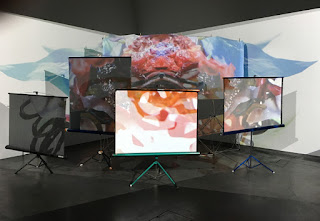 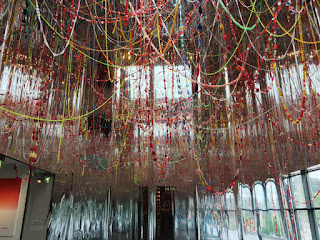 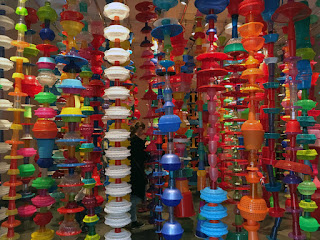 This one, also by Choi Jeong Hwa, completely fills a room through which visitors have to wander as if through a jungle, pushing aside the "foliage." Click here for video. 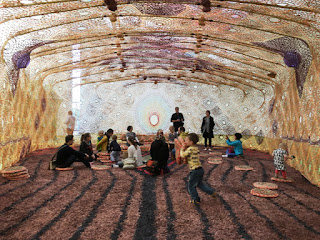 An entire floor, including this enormous space, was devoted to Brazilian artist Ernesto Neto. Click here for video.

The Ateneum was appropriately housed in a building styled in Beaux Arts tradition, while the HAM seemed quite utilitarian in a nondescript municipal structure. The contemporary mission of the Kiasma was evident even before you entered the dramatically curving and monolithic structure (which I neglected to take a picture of--sorry!)

If you missed my first (much shorter) post from Helsinki about the church in the rock, click here.

Stay tuned for the Hermitage.