The split personality of the NGV

The NGV, as it is commonly known, has a split personality and is literally divided into two campuses.

The Ian Potter Center: NGV Australia specializes in art of Australian origins, both indigenous and not, from colonial to contemporary. It is a major responsibility for a continent-sized country.

But then again, the NGV International, like so many “encyclopedic” museums in other cities around the globe, attempts to represent the entire rest of the world.

I spent more time in the Ian Potter Center but I managed to catch a few things at the International as well.

Here is a very small selection of things that caught my eye. 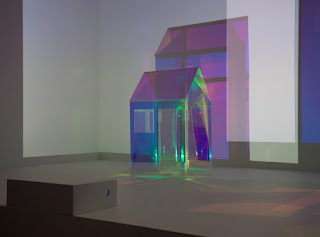 In this multi-media installation by Adam Goodrum, the immaterial aspects—cast light and shadows on the walls—seemed more substantial than the sculptural bit made of polymer resin at its center. 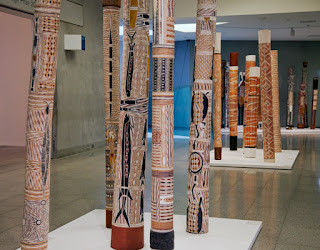 I very much enjoyed the indigenous works on display, some of which were historical and some contemporary. 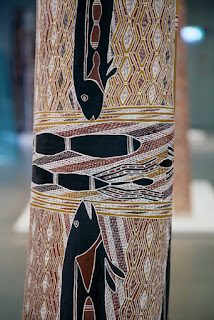 This detail from a painted Eucalyptus pole was made in 2003 by Gawirrin Gumana of the Guyamirrilil people of the Northern Territory. 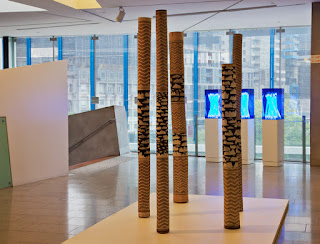 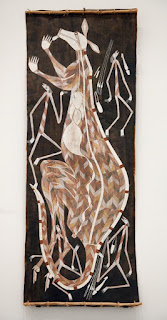 Having recently experienced Australian wildlife for the first time ever, I was drawn to indigenous representations such as this kangaroo by Robin Nganjmirra of the Northern Territory. 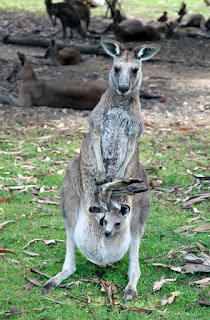 I’d seen kangaroos several times in the wild by this point in my trip. This one, however, was in a wildlife park, which enabled me to get close up and personal. In fact, they eat out of your hand like goats in a petting zoo. 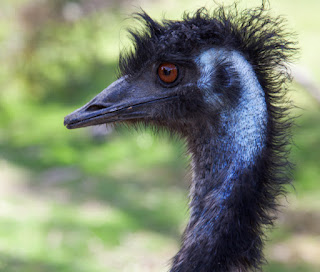 However, I learned the hard way not to let the emus eat from my hand. Fierce creatures; they definitely bore a familial resemblance to velociraptors. 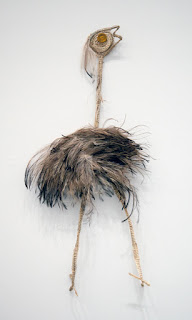 This sculpted representation was made from actual emu feathers and other fibres by Treahna Hamm of Wodonga, Victoria. 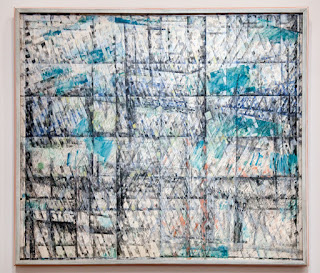 This modern piece was made circa 1962 by Godfrey Miller and titled Trees in Quarry. Like many Australians, Miller was educated in Europe before moving back to Sydney and an art career.

My favorite works in the Ian Potter Center were a roomful of altered photographs by Tony Garifalakis. This set of three demonstrates the tone, technique and style of the rest. Collectively called Bloodlines, The suite of 12 portraits of royal families have been ruthlessly defaced with black enamel paint. 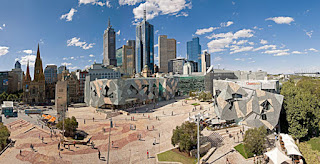 I also liked the architecture of the building, which clearly eschews the straight and plumb of traditional structural forms. The exterior of the building, which I neglected to photograph (mentally kicking myself), looked like a child’s play structure that had been knocked down and rebuilt several times before the child went on to other things. The aerial shot (above) I borrowed from a website called Culture Victoria. 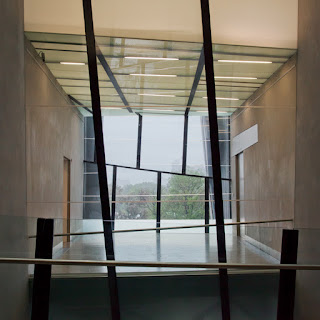 This is a shot of the interior showing a little of the complexity of the spatial relationships and off-kilter lines of the architecture. 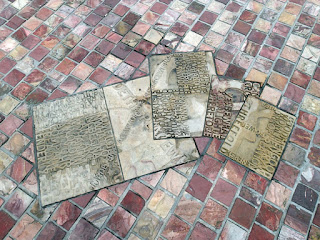 Outside, there were several very intriguing, if hard to decipher, relief sculptures set into the very irregular paving bricks of the huge plaza.

I can’t do this museum justice. I blitzed past most of the collection in order to see contemporary work on the top floor. Just three examples: 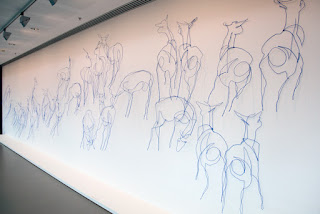 This sculptural mural made of painted wire by Mira Gojak is entitled “Unending herd of blue.” The artist intended it to represent the progression of Western art from the earliest cave paintings through Renaissance development of perspective and chiaroscuro to Modern art’s concern for the picture plane. Not to mention the tension between the drawing-like linearity and three-dimensional space. (Then again, maybe it wasn’t the artist who had all those grandiose intentions, but the curator who wrote up the wall label.) Sarcasm and hyperbole aside, I enjoyed its scale and playfulness. 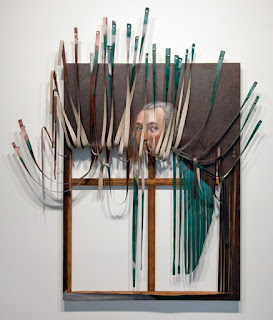 This painting, slashed as you see it, is by an “American” named Titus Kaphar. When visiting a foreign museum, even the U.S. artists represented are unfamiliar ones. The work is entitled “Stripes.” 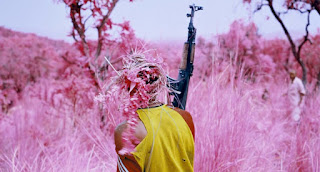 The real reason I went to the NGV International was to see “Enclave,” the video installation by Richard Mosse, which I saw listed in the promotional brochure at the Ian Potter Center. I’d heard of Mosse and seen stills of his powerful infrared images, taken in war-ravaged Democratic Republic of the Congo. But stills cannot convey the power of the video. Even a single video screen online cannot really represent the power of the installation, which employs at least 6 enormous video monitors at various angles throughout a large, darkened gallery. The monitors cannot all be taken in at once and if you move around to see them all it is as if you are amongst the people in the videos themselves. Very immersive and the more moving for it.

To see an interview with Richard Mosse and get a sense of the content of the video, go to Vimeo. 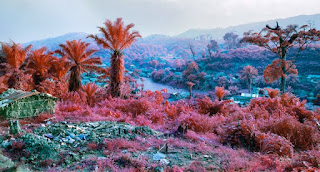 “Enclave” was my favorite work of art of all that I saw in Australia--and I saw a lot of great work! Click here to read my review of the Adelaide Gallery of Art.