Maybe it’s just me, but I’d never been aware of the Phoenix Art Museum until I went to Phoenix for the first time recently. If I’d thought about it I would have expected a city that size to have a decent museum, so I think it’s actually an interesting question: why hadn’t I heard of it? There are well known art museums in cities – some smaller than Phoenix – that I’ve never been to.

I don’t have an answer. Maybe they never lend works out to other museums. Maybe they don’t originate many important or traveling exhibits. Maybe they just don’t get enough press. Maybe it’s just me.

But finding the Phoenix Art Museum was a pleasant surprise. I spent a long time in it – and not just because it was over 110° outside!

The featured exhibit was called Paper! for the simple reason that all of the work in the show was either printed/painted on, made of, or in some way about paper. The few selections I’m including here just hint at the diversity of work in the show. In fact one could criticize the lack of a coherent theme, genre, historical period, or any of the other typical unifying art categories. But I found it refreshing.

Having just seen the new exhibit at the Milwaukee Art Museum, Posters of Paris: Toulouse-Lautrec and His Contemporaries, the biggest surprise was finding some of the exact same posters on display here. 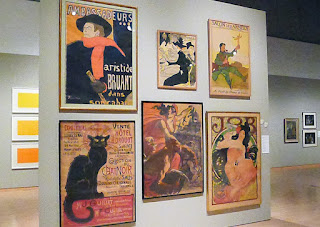 These are just a few of my favorites. (I was also surprised that non-flash photography was allowed in the gallery, with a few exceptions.)

I don’t have time to describe my entire experience at the museum. It is strong in a few predictable areas, like the distinctive arts of the southwest – as it should. It also has an extensive permanent collection of contemporary art in a cavernous new wing. 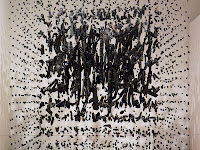 Milwaukeeans like me who are fans of Cornelia Parker will find another connection between the two museums in this piece, entitled “Mass (Colder Darker Matter).” It was constructed from remnants of a church in Texas that was struck by lightning.

And for those familiar with MAM’s “Infinity Room,” its younger, hipper cousin resides here in Phoenix. By Yayoi Kusama, it is titled “You Who are Getting Obliterated the Dancing Swarm of Fireflies.” You can see a static image of it (which gives a feel but, of course, doesn’t do the kinetic/visual experience justice) by viewing the online gallery of contemporary art on the museum website.

To read two very different accounts of my exploits in Phoenix, check out:
Phoenix Botanical Gardens: Art vs. Nature
The Wilderness of Immigration Detention
Posted by eddee at 1:32 PM