Milwaukee’s War Memorial and Art Museum have long been strange bedfellows, sharing space in what has become a mélange of architectural forms at their premier location on the lakefront. But their often disparate missions have found an intersection in a new exhibit with the evocative title SpeakPeace and the cumbersome, though precise, subtitle, American Voices Respond to Vietnamese Children’s Paintings Exhibition.

The display includes 34 paintings by Vietnamese children responding to themes of war and peace out of intensely felt personal experiences that those of us fortunate enough to have lived without such experiences can only begin to imagine. Each painting is complemented with prose or poetry written by American children, war veterans, and established poets. 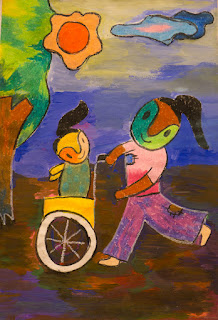 This cheerful seeming oil pastel by 14-year-old Do Nguyen Thanh Tam is titled Agent Orange Infection – I go to school with my friend.

Beneath it is Orange Crayons, Orange Sun by Texas poet Michael Mars:

when I was young, I would refuse to use the color orange
I would remove it from my box of crayons, wondering to myself
why all the other crayons in all the other boxes
in all the other countries, stood muted, at attention
refusing to at least lament its use, question its usefulness,
refusing to scream against the untold horrors it left behind
when it rained down its orange tears on my countryside

why would you ever tolerate any orange
that wilted the leaves on trees, left vines
shriveled to the ground, farmlands barren
maybe you didn’t think you’d live long enough to see
a drawing of me with my friend on our way to school
maybe I didn’t think I’d live long enough
to want to grasp at a crayon once again 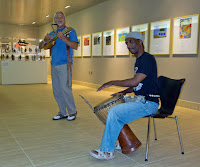 The opening reception, held Monday evening, was a multidisciplinary affair that included music and a participatory drumming circle led by Jaymes Finlayson and David Stocker of One Drum.

A presentation by the Homeless Veteran Initiative of Veterans for Peace was an eye-opening peek into the plight of homeless veterans in Milwaukee, estimated at 300-400 per day. Poetry was recited, including a passionate one by a “Gold Star Mother” who had lost a son in Afghanistan. Members of the OCA-WI Youth Dancers performed a Chinese fan dance. 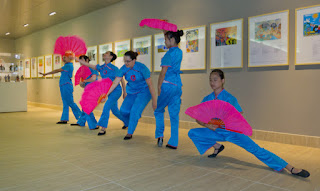 The exhibit is fittingly located in the recently renovated north lobby to the building shared by the War Memorial and Art Museum. This makes it out of the way for visitors using the main entrance. I hope that signage in the main lobby will direct people to the exhibit. Unfortunately, the collaboration implied by the use of this shared space doesn’t seem to have extended to the sharing of information. The museum’s education director, Barbara Brown Lee, who was enticed to the opening by the sound of drumming, told me that she hadn’t known about it beforehand and didn’t think others on staff did either.

Perhaps that oversight can be corrected while there still is plenty of time. The exhibit runs through July 6.

SpeakPeace was created by Kent State University’s Wick Poetry Center and School of Art Galleries in collaboration with Soldier’s Heart, a veterans’ return and healing organization. It’s stop here in Milwaukee is part of an international tour. A local group, Speak Peace MKE, has organized a companion project and exhibit of 6x6-inch paintings that is on display at Danceworks, 1661 No. Water St.

More information about the exhibit and a calendar of upcoming events are available on the Speak Peace MKE website.

My Feelings About the War

It’s always two: black war,
red and yellow peace, one
beside the other. Bombs on
the war side, people fallen,
bleeding from the neck.
Balloons on the peace side,
green grass and children
in bright new clothes.
Their faces are always two
Because of what they have seen.

- Maggie Anderson
Posted by eddee at 8:55 AM