Never mind the titillating Victoria’s Secret ad that was filmed there, a website called VirtualTourist has named the curvy Calatrava-designed Milwaukee Art Museum’s Quadracci Pavilion itself as the world’s sexiest building. Which begs the question, how does one decide what makes a building sexy? ’s Secret doesn’t leave that question much latitude, but architecture is another thing. Is “sexy” simply a provocative way to say “cool” or the latest in trendy design? (Some of their choices are decidedly old.) Are there formal qualities of shape and proportion that deliver innuendoes?  Or can there be something sensual about a building that actually evokes or at least symbolizes the physical attraction that “sexy” denotes? 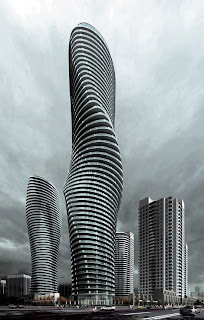 If sensuous curves are the criteria, why ? There are Calatrava buildings all over the world that compete with this one, along with any number by Frank Gehry, whose Disney Opera House made the list of top ten. On the other hand, if you check out the complete list you will find it includes the Sonneveld House in , the , which is all straight lines and right angles. They call it the “strong silent type” but how imaginative is that? If that’s the criteria, let’s start with Mies van der Rohe's masterpiece, the and work our way down to a brutalist hulk like John Madin’s Central Library in (below). 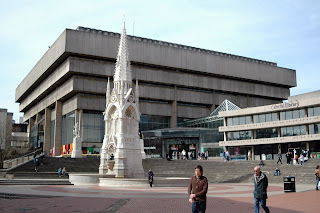 OK, maybe that's not very sexy, but masculine sexual metaphors are definitely in a token minority on the VirtualTourist top ten list. Curves clearly dominate. The in (top), tall and twisty as well as curvy, are described as the “supermodel of modern architecture.” A bridge (there are two sexy bridges on the list) in is “slinky as a screen siren…slithering across the water.” Gaudí made the list, as well he should. But ’s Calatrava? Perhaps I’m making too much of what is no doubt a PR ploy to attract customers to its website. Maybe VirtualTourist makes a new list every year and has to come up with new choices. That could be why they choose over, just to pick one of Calatrava’s more outrageous designs, the Tenerife Opera House (below). 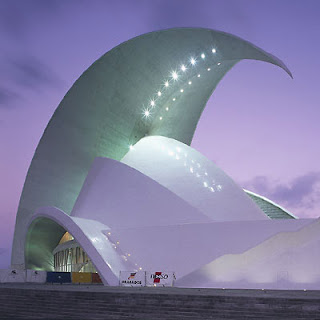 But, hey, why not ? If sexy is in the eye of the beholder (shall we ask the Supreme Court?), then the Quadracci Pavilion can stand the scrutiny. Georgia O’Keeffe continually denied that her giant flowers were meant to be interpreted as sexual in the face of almost universal disagreement. How unlike her Calla lilies is this magnificent edifice? 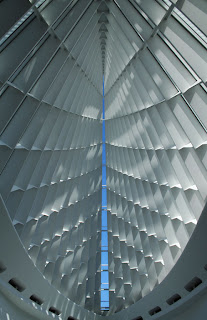 (I still marvel at it every time I see this building. Not that it exists, but that it’s here, in Milwaukee!)
And thanks to Mary Louise Schumacher at Art City for bringing this to my attention!
Posted by eddee at 8:21 AM