Since its inception in 1839, photography has lived a dual life: is it art or a representation of reality? That it can be both doesn’t seem to quench the question, which has been answered many times but seldom to the satisfaction of the general public (as opposed to the art establishment and collectors willing to pay significant sums for some photographs.) Like a wildfire that seems to have been brought under control, every little breeze makes it flare up again.

With each new technological advance, the question returns in some form. In an article in this week’s New York Times Magazine by Virginia Heffernan, the question has been turned around. If it’s not meant to be art, how does the new photographic technology of HDTV divest itself of artifice? (Click here to read the article.)

“Reality TV” has always been an emperor without clothes. Even in science, much less art, it is understood that an experimental outcome is always affected by the role of the experimenter. A subject is at the mercy of the photographer and the photographer limited by the technology. Even back in the classic black and white days of Walter Cronkite “the news” as presented in print or on TV has always been different than the reality it reports.

Now we have HDTV, which renders reality with a “staggeringly fine-grain resolution” that reveals every pore, blemish, and wrinkle in its subject. Do we still have to ask if this is reality or not?

René Magritte used paint, but his famous image (below) would be just as true as a photograph. The words in the painting translate into the paradoxical “this is not a pipe,” but Magritte pointedly titles the piece “The Treachery of Images.” It also would be just as true in HDTV today as it was in 1929 when he painted it. 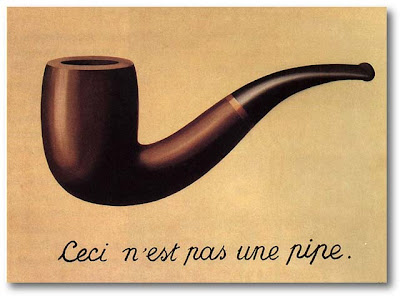