Rebecca Belmore: Fringe
Belmore’s image, installed in the hall outside the gallery, is an appropriately powerful introduction to Until Now: Collecting the New (1960-2010), an exhibit of contemporary art at the Minneapolis Institute of Arts that maintained a high level of engagement throughout, at least for me. Larger than life and illuminated from behind, the woman represents violence done to Native American peoples. The image is at once beautiful and horrific. The elegant form is disfigured with a dramatic scar sutured with Indian beadwork that drips down her back like blood.

MIA ranks with the Metropolitan in NY and the Art Institute in Chicago as a vast all-encompassing collection of art from many historical periods and cultures. This exhibit demonstrates that it is not a stagnant collection but very much up-to-date. It includes some of the obligatory major figures from this period, like Warhol, but also many less obvious choices. It also is ethnically diverse and organized thematically (which I’m beginning to think is a curatorial trend after seeing it done in several museums lately). Here some of the themes are fairly standard, like “style” and “identity,” but others are more idiosyncratic, like “poptical,” “new poetics,” “migrations,” and “recuperation.”

I loved this piece by Yinka Shonibare (right) because I instantly recognized its faithful photographic rendering of one of my favorite Goya etchings, The Sleep of Reason Produces Monsters.
The whole show was so strong that I couldn’t possibly describe all of the pieces that moved me, but I must mention the two videos because I don’t often favor video art and these were both wonderful and compelling. Bill Viola’s Three Women shows women of three generations emerging from a screen of falling water and then disappearing back behind it. At first colorless, the figures undergo a remarkably simple but surprising transformation as they pass through the veil of water. They possess iconic presence and ambiguous religious symbolism.

Doug Aitken’s Migration video was so engaging that I sat through its entire 24 minute duration, something I rarely do. A uniquely poetic commentary on disappearing wildlife habitats, it mostly depicts wild animals inside hotel rooms, some bland and some stately. A horse impatiently stamps its dust-laden hoofs on the burgundy carpet. A cougar tears through bed linens like prey. An edited version on you-tube gives a flavor of the piece (though hardly does it justice).

Until Now: Collecting the New (1960-2010) continues through August 1, so there's plenty of time to see it if you're going to Minneapolis this summer. 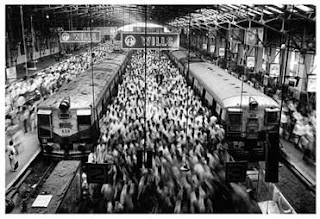 Sebastiao Salgado: Exodus
See my second installment of Art in Minneapolis: the Walker Art Center.
Posted by eddee at 5:43 AM