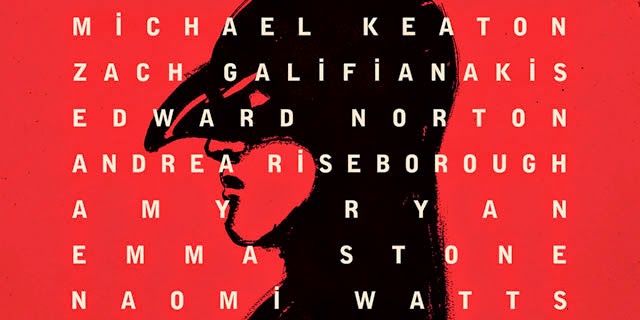 Went to see Birdman at the Oriental Theater last night. The house was packed. The word is out: Birdman is worth watching. And it was! Not only did I enjoy its mixture of real and surreal, psychological and emotional, but it was textured with such complexity that I felt like seeing it again right away.

The story revolves around an aging actor once famous for playing the eponymous comic book character in blockbuster movies but now trying to make a comeback in theater on broadway. Tortured by doubt, feelings of inadequacy, the desire to succeed and a dysfunctional personal history, he finds himself also besieged by the rigors of the theatrical production. He is surrounded by characters--other actors, stage manager, family members, theater critics and the general public--who can be supportive but often are volatile, sometimes abusive.

My favorite movie ratings site, Rottentomatoes.com, indicates that the critics like it somewhat more (94%) than audiences (87%), though still a respectable rating. The difference is understandable. If you went to it expecting more of the action hero comic character that lurks behind all that the real, fragile human actor does, then you might be disappointed.

The acting is superb. Keaton is outstanding in the lead role. Ed Norton deserves a nomination for best supporting actor, playing an overbearing, self-absorbed celebrity genius actor who drops into the cast at the last moment. The story is based on the literary work of Raymond Carver, whose influence goes beyond providing a vehicle for the theatrical production in the middle of the movie. The tensions and twists characteristic of Carver's short stories are present in the movie from beginning to end.

I don't think it will spoil anything to suggest that one gets the feeling that a Broadway theatrical production is a study in controlled chaos. This fine movie is about pushing the edge between the control and the chaos. I recommend it.