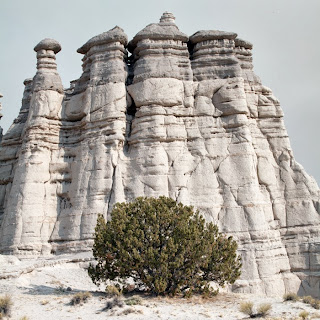 For the past week I have been staying, teaching photography, and relaxing at one of my favorite places: Ghost Ranch in Abiquiu, NM. Ghost Ranch is a retreat/education/conference center owned by the Presbyterian Church but is most famous as the place where Georgia O'Keeffe lived and painted many of her striking New Mexican work. One of her subjects was this unusually pale sandstone slot canyon in Abiquiu. The gray stone can look white in the bright New Mexican sun, hence the name. The site is owned by Dar al Islam, a mosque and Islamic Education Center. 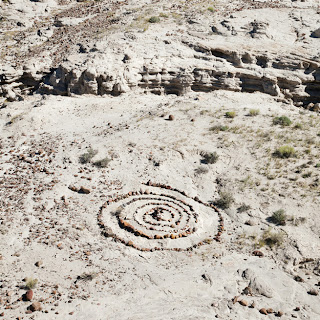 I've been in the mood to write haiku here in New Mexico, a land of contrasts and, for me, introspection. Here is the one I wrote for the White Place:

the White Place
a monk in saffron robes
raises an ipad


I am teaching a workshop in digital photography at Ghost Ranch and I took my class to the White Place for a photo shoot. As our group gathered back at the parking area after a couple hours of shooting, I saw this monk walk slowly up to the mound with the “Plaza Blanca” sign on it overlooking the site. As I watched he slowly drew an ipad out of his robes and began to raise it with both hands. Knowing the capabilities of an ipad it was obvious that he was about to shoot a photograph. However, it reminded me of a priest raising a host, or a supplicant seeking absolution, or simple praise; something sacred and holy, as befits both the symbolism of his robes and the grandeur of the site.

The well-known form of Haiku originated in Japan and is a very short, traditionally three-line, poem. In current practice the form is flexible. The essential quality of haiku is usually a small epiphany based on the observation of two contrasting images. I was inspired by the juxtaposition of the monk’s traditional garb with the latest technology—even if upon second thought, it ought to be considered perfectly normal in today’s polyglot society.

I had put my camera in my bag when I saw the monk raise the ipad. I would have liked to catch a shot of him raising it. Alas, that was not to be. I did introduce myself and ask if I could make a photo of him, a request to which he acceded with humility. He said his name but it was so multi-syllabic and foreign to my ears that mind unfortunately would not grasp onto it. 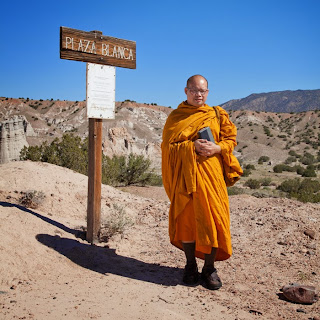