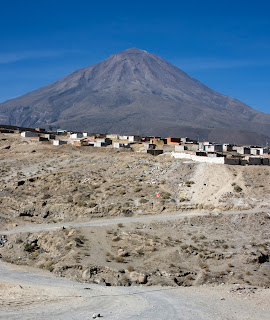 It took me over a year to get around to it, but I've just completed a book based on my solo exhibit at Mount Mary College in 2011. It is entitled Seeing Peru: Layered Realities. At 11" x 13" it is my first large scale book project to date. The entire book can be previewed (and purchased) at Blurb.com.

The following is adapted from the introduction:


"In popular imagination Peru conjures up images of an ancient Incan civilization that lingers in jungles and atop mountains in noble defiance of the colonial conquest that led to its ruin. Despite a period of relative peace, contemporary Peru, like many of its South American neighbors, also suggests political unrest born of extreme social and economic stratifications. Most Peruvians, however, live simple lives from day to day, eking out a subsistence in one of the harshest landscapes on earth.

Seeing Peru: Layered Realities emphasizes the contrasts I’ve witnessed in a land both mythical and humble. The terrain rises almost vertically from the vast Pacific, reaching heights over 20,000 feet before falling just as precipitously into one of the most remote jungles in the world. Where it isn’t jungle, it is mostly desert. Amidst a largely barren landscape, irrigation in fertile volcanic soil makes possible the cultivation of a rich diversity of crops. Most tourists visit Cusco and the Sacred Valley of the Urubamba River, where the individual human is dwarfed by the colossal stonework of the Inca. But as impressive as these fabulous structures can be, they are themselves dwarfed by the sheer scale of the mountainous landscape."

"I was in Peru in conjunction with a Mount Mary College cross-cultural art therapy program. The program included a pilgrimage to Cusco, Machu Picchu, and other sites in the Sacred Valley, as well as an excursion to the Colca Canyon. But the primary focus was on service learning, working with the poor, and cultural understanding.

The goal of this book is to convey a sense of the “layered realities” I experienced. Along with the realities of geography, climate, and culture, I was particularly struck by the contrast between the typical views a traveler might bring back from Peru and the lives of ordinary Peruvians. The book is divided into two sections. The first provides a glimpse of the expected: the monuments and the colorful characters who appeal to tourists. The larger second section focuses on the conditions in a community that is hidden from the view of a typical tourist (as well as many urban Peruvians): the lives of the people who live in Alto Cayma." 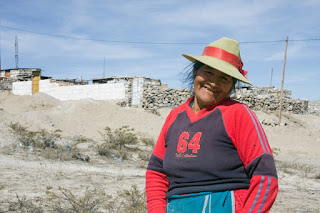