“Aqua Bella” and more at the Delafield Arts Center


The Delafield Arts Center wasn’t easy to find, at least not at night when we went there on Friday for an artists’ reception. Despite the Google map that pinpointed the location we drove right by coming and going without seeing it. After parking, my wife and I found it on foot. But it was my intuition guided by Google that led us to the brightly lit interior with artwork on the walls, visible through large storefront windows. Only later did I notice the name printed on the front of the dark awning overhead.
Maybe the locals don’t need any clearer signage, but if the Center wants to attract those of us from out of town who haven’t been before, a more prominent street presence would help. Fortunately, the place was worth the effort it took to find.
We were greeted graciously in the spacious foyer and our coats thoughtfully taken to a separate cloakroom.  A room full of small photographs by VickiReed swept off to the left and another hung with paintings by Colette OdyaSmith swept off to the right. Each space in turn was intimate, well suited to the work that was displayed there.
Reed and Smith were two of a triad of artists in the featured show, called “Aqua Bella,” and their work was familiar to me. The watercolors of Amy Arntson, who completed the threesome, hung in another gallery beyond the first two. As the title suggests, a common subject connected their disparate media and styles: water.
Reed personalizes the natural world with a dream-like style and the deliberately low tech Holga camera that she often uses. The scale of her images invites close inspection and a meditative response to lyrical features in the landscape rendered in a gauzy monochrome.
Smith, while she clearly lives in the same natural world, sees it – and expresses it – very differently. Leaves, logs, rocks, water – whether still or swirling – become layered patterns in her colorful pastel paintings. Without a horizon for an anchor her perspectives become ambiguous and disorienting. The imagery has equal parts earthiness and mystery, suggestive of a transcendent, perhaps spiritual presence.
Unlike her compatriots, Arntson leaves the earth completely behind, venturing out into the open sea. Her meticulous watercolors depict ethereal and ever-changing patterns of surf and sea-foam in a style at once hyper-realistic and abstract.
But wait! There’s more….
The Arts Center continues on past the end of the “Aqua Bella” exhibit, opening to more galleries as you proceed, with side galleries along the way. With 7,000 sq. ft. of gallery space, it feels like an ambulatory of artistic chapels.
One of the side “chapels” houses a pair of black and white photographers whose work is very familiar to me. Their dual exhibit is entitled “Blurring Reality.” 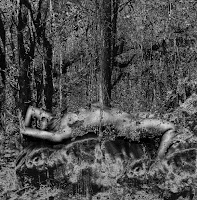 Valerie Christell’s installations at her now closed Merge Gallery were always provocative and challenging. Although presented here in a more traditional, hence tamer manner, her current crop of enigmatic photomontages are consistent in tone and content.

Philip Krejcarek, whose work shares the same space, also mines a new lode from a familiar theme, the human figure laden with art historical and occasionally religious references. In several of these he has veiled his subjects in a uniform sheen of white, perhaps a mystical shroud. (Upon seeing them fellow photographer, and friend of the artist, Tom Ferderbar jokingly quipped, “More proof of the need to use archival printing processes.”)
A larger gallery towards the back held the work of a diverse group of artists, including a series of Charles Wickler’s bold text-based mixed media pieces. I didn’t keep a count as I wandered through in disbelief at the sheer size of the place and scope of the exhibitions, but the Arts Centerwebsite lists 16 artists on display in addition to the three featured in Aqua Bella.
And still that’s not all! At the tail end of the string of galleries, in yet another room of its own, is a show of work by people with disabilities.
There’s a reason I call my blog “Arts Without Borders” and I’m happy to have explored farther afield than usual to discover this new - for me - scene in Waukesha County.
“Aqua Bella” remains on display through March 31 and “Blurring Reality” through April 1.
(Full disclosure: a surprising number of the artists in this show are friends, colleagues and acquaintances – way to go y’all!)
Posted by eddee at 1:24 PM