Who has a big idea?

Is there an Einstein living today, someone who thinks so big that everyone takes notice? So big that it changes the way everyone thinks?

If there were such a person, would we be paying attention?

We've all heard the old conundrum, "If a tree falls in the forest and no one is around to hear, does it make any sound?" What if a tree falls in the city? All around the tree there is a cacophony of noisy activities, traffic, construction, conversation, etc. Will anyone notice?

In the New York Times, Neal Gabler has written a provocative and engaging essay about the death of the big idea. He cites many examples of famous thinkers from time gone by, like Einstein, Reinhold Niebuhr, Betty Friedan, Marshall McLuhan, William F. Buckley, Jr. Marie Curie, and George Washington Carver. But he opines that the voices and ideas of any such thinkers alive and speaking out today are drowned out by the deluge of information to which everyone is constantly subjected. He further suggests that social media, with its emphasis on short bursts of mostly trivial information, is particularly culpable.

It's a good essay, worth reading: The Elusive Big Idea.

Gabler makes only one reference to big ideas in art. He doesn't mention a single artist, though. He says, "An artist friend of mine recently lamented that he felt the art world was adrift because there were no longer great critics like Harold Rosenberg and Clement Greenberg to provide theories of art that could fructify the art and energize it." I find it sad but telling that the people who wrote theories about art get credit for having had big ideas instead of the artists themselves. But then, so much of Modernism was about the words/ideas as much as the art itself. I think it may be even more true of contemporary art.

Which artists had the big artistic ideas, on a par with the great thinkers who affected the culture? Giotto? Velazquez? Manet? Cezanne? Warhol? Was Pollock's success really so dependent upon the intercession of Rosenberg and Greenberg?

How about photography? The medium itself probably changed the way we see the world more than any single practitioner. In fact, until I retired from teaching last May, I kept a poster version of this famous image on my classroom wall because I consider it (or whichever was the first one taken from space) to be the most influential photograph ever taken. Further, the image of the earth from space, that tiny blue sphere in a universe of black, may be the most important image ever made precisely because of the big idea it represents: the earth is fragile and its resources finite. It is no accident that the image graced the original cover of the Whole Earth Catalog or that the first Earth Day was organized shortly after its first publication. 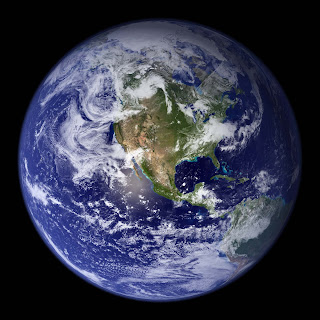 Does art still have the power to affect how we see the world? Or is everyone too busy uploading images to facebook and you-tube of their pet or their latest meal from their cell phone cameras to see anything else?

Hey, I have an idea: anyone want to see pictures of my adorable new granddaughter? Just go to my album on Facebook.
Posted by eddee at 8:15 AM