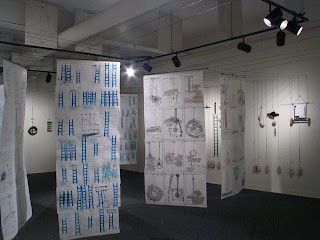 I wander amongst large vellum panels elaborately suspended from the ceiling with a crisscrossing system of strings. The panels swing gently with the breeze of my passing. Their feathery lightness is counterbalanced along the walls with a wide variety of ceramic constructions and what appear to be small sandbags hanging from the strings. The effect is by turns delightful and vaguely disquieting. 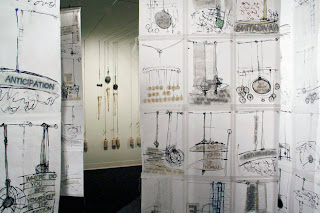 The austere Rowe Art Gallery in the Humphrey Art Center has been utterly transformed by Sandra Westley into something akin to a funhouse maze. The installation is entitled The Object Series, A Narrative in Many Parts. The concept of the narrative, a potent artistic device throughout history, is at once literal – the panels are emblazoned with script and scribbles galore – and implied. However, the questions it poses are left unanswered, the story without an ending. 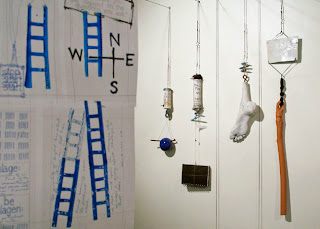 Like the texts, drawings on the panels are enigmatic. They combine overtly the symbolic imagery of ladders with more elusive and personal iconography. When I emerge from the maze I am confronted with an assortment of odds and ends that include toy-like vehicles, ladders, notebooks, scrolls – and severed feet. 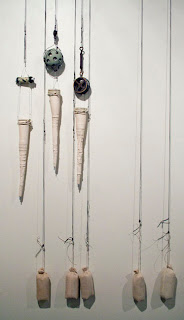 Showing concurrently in the lofty Marceil Pultorak Atrium Gallery is the latest work by Gary John Gresl, the result of a three month artist in residency at the Kohler Company in Sheboygan. Though hardly sedate, to anyone familiar with Gresl’s oeuvre these pieces will seem relatively restrained. 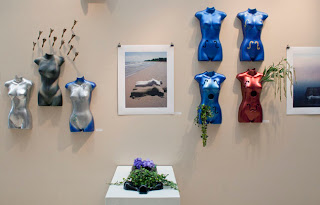 A female torso, modeled on a manikin that he describes as deriving from contemporary pop culture, has been slip cast in the Kohler ceramic factory, using the same processes and material out of which they make bathroom fixtures. Eschewing the traditional glazes as “unexciting,” Gresl painted the torsos with automotive enamels and lacquers, giving them a slick, metallic quality. 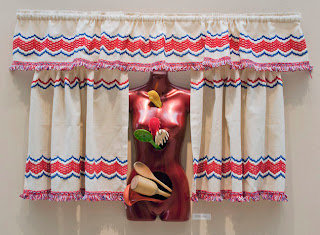 However, the very slickness of the surface makes Gresl’s manipulations of their forms all the more striking. The torsos are punctured with machined openings, like tourist figurines that are meant to hold toothbrushes, kitchen utensils, or bouquets. And in fact, some of these items are inserted into the openings as comments, as I interpret them, upon feminine stereotypes, roles, and identity. 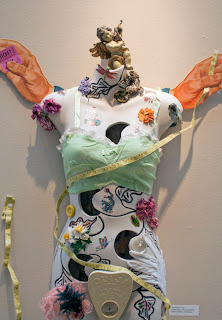 Either one of these exhibits is worth the trip out to Waukesha; together they are quite a bargain. They run through March 19. For more information, go to Carroll University.
Posted by eddee at 10:44 AM