“Get to know your subject” is an appropriate mantra for aspiring and veteran photographers alike. Many of the most admired photographers have been known as much for their subjects as for style, technique, or conceptual approach to the medium. Yosemite Valley belongs to Ansel Adams; the lowly green pepper became Edward Weston’s forever monumentalized icon, and although many photographers have trained their cameras on wars, none is so enduringly identified with that vast subject as Robert Capa.

If people don’t soon begin to associate contemporary Vietnam with Lawrence D’Attilio it won’t be for his lack of trying. Over the past four years, D’Attilio has traveled to that distant land many times, often spending months on location. The depth of his exposure is clearly evident in the work that is on view at Redline Milwaukee through the end of September. This is no travelogue. In fact, in this unconventional installation, with a trio of shows related only by their common subject, formal experimentation almost eclipses the artist’s mission to bring Americans up to date on this complex land. The desire to express that very complexity is what integrates three rather distinct bodies of work. 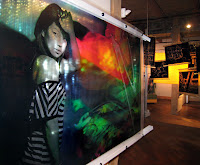 Tucked in a back corner gallery, color prints in a traditional documentary style depict entrepreneurial women who have managed to create small businesses with the aid of a microloan program. But D’Attilio is not content to show us neat rows of carefully framed images. The other two legs of this triadic exhibit have less in common with traditional photographs than with installation art in other media. Upon entering the main gallery, one is confronted first by enormous mixed media collages that the artist titles “Time for New Women.” The physicality of these pieces combined with their larger than life depictions of young Vietnamese women elevates them from commonplace portraiture; they become totemic metaphors for an ever-changing and unpredictable contemporary global culture.

The third and most unexpected component of this installation occupies the center of the gallery space. Large transparent black and white images on film are suspended from wires. They swing freely as visitors pass in between and around them. A reductive process has created stark graphic images that almost seem hand drawn. During the opening reception this installation was accompanied by a jarringly discordant sound track of music and ambient sounds of traffic recorded in streets of Hanoi. We are transported out of our normal lives to the frenetic and mysterious culture of Vietnam that shifts even as we try to make sense of it. 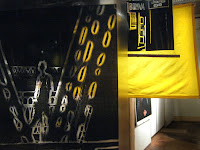 It is an exhibition that could be called “photography without borders” so of course I was intrigued. Redline, with its open spaces and flexible display systems, is the perfect venue for such a complex show. Vietnam, which continues to confound most Americans 35 years after the cessation of hostilities, is a challenging subject and the scope of D’Attilio’s examination of it is ambitious. Try to see it before it closes Sept. 30.

But wait…there’s more! Ambitious as this show is, D’Attilio has two additional concurrent exhibits of photography from Vietnam in the Crossman Gallery at the University of WI – Whitewater.

You can also see more of D’Attilio’s work on his website.