A day of art in Chicago: Matisse at the Art Institute

A day in Chicago: Chapter 1 (A 3-part serial post) 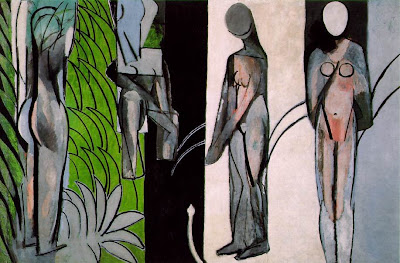 “Radical Invention, 1913-1917” is the current blockbuster at the Art Institute of Chicago. It fulfills its promise to provide an in depth analysis of Matisse’s truly radical transformations during this pivotal period. That these years of abstract experimentation coincide with World War I is curiously irrelevant. But acknowledging that irrelevance is paradoxically crucial to understanding Matisse’s artistic motivations. 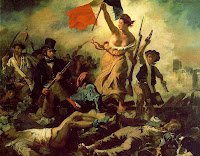 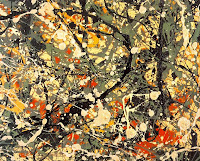 How does an artist paint “freedom?” At one end of the spectrum, a politically charged Delacroix glorified freedom fighters during an uprising against the French monarchy (right). At the other, during a global age of anxiety brought on by the very real potential for nuclear annihilation, Jackson Pollock loosened his limbs and made paint express freedom viscerally (right). Falling between those poles, Matisse perhaps best exemplifies one of the dominant concerns among the avant garde artists of the twentieth century: artistic creation increasingly freed from convention as well as unmoored from subject matter. He deliberately chose to disregard the tragic realities of his time in pursuit of artistic freedom. He is quoted in the exhibit, saying “Despite pressure from certain conventional quarters, the war did not influence the subject matter, for we were no longer merely painting subjects.” I added the emphasis, which leaves me cold, as if responding to world events is somehow beneath the exalted purpose of art.
This attitude resonates today. In fact, Matisse’s influence is profound. At ArtChicago recently most of the art left me scratching my head wondering how two on-going wars, a crashing economy, and looming ecological disasters could be so entirely absent.

I had to see Matisse at the Art Institute. When one sees as much art as I do, a truly memorable exhibit is unusual. A sublime Matisse show at the National Gallery in D.C. many years ago has that distinction and I wanted to see if this one would duplicate that experience. I was skeptical, though, because there are whole swaths of Matisse’s work that do not move me as much. 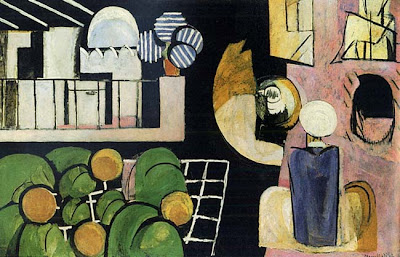 This one is excellent—but falls short of sublime. Like the Bearden show (see Chap. 2 tomorrow), we get an in-depth view of Matisse’s creative process. By the time one gets to the show’s two centerpieces, “The Moroccans” (above) and “Bathers by a River” (top), one has been thoroughly prepared for their abstract forms and compositions. My personal favorite, however, is his series of four bronze sculptures entitled, simply, “Back (I-IV)”. Unlike the paintings, these I’d seen before—and in better circumstances. At the Hirschhorn Sculpture Garden, also in D.C, the four larger than life size pieces are displayed in a line, as they are in the image below. Unfortunately, the A.I.C. show has them spread out from one end of the exhibition to the other, which diminishes the impact of their transformation. But the sheer output of paintings, sculptures, and prints in its four-year purview make this show stunning.