Wordsworth and the desert monastery

“The world is too much with us…,” the poet said.


If, as Wordsworth says, we “lay waste our powers” by “getting and spending” then one solution is to remove the temptation by retreating from society.

The impulse to escape the travails of the world, to disconnect the TV, avoid the news (if not “getting and spending”) is easy to understand. It is one reason I came to Ghost Ranch. But for me it is temporary, an interlude of rest and recuperation. Monastics make it a way of life. 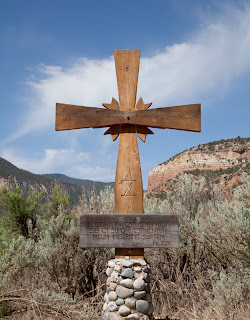 By their nature and purpose monasteries are meant to be retreats from the world. In many cases the idea of “retreat” is to remove oneself physically from contact with the larger society. This can happen just about anywhere—behind walls.

I drove a long way down a desert canyon to visit the Monastery of Christ in the Desert. For those not faint of heart it is a popular side excursion while staying at Ghost Ranch. This place has got seclusion nailed (unless you count folks like me who are allowed to wander in from the world!) 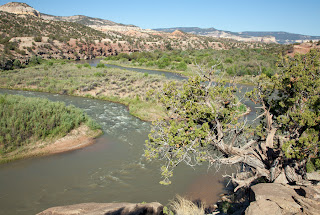 The dead end dirt road is 13 miles long. While thirteen miles doesn’t sound far in our car culture, I averaged about 13 miles per hour (not counting stops to take pictures.) That should make it easy to calculate how long it took to get there!

I might have gone a little faster in a 4x4 pickup but my little rental Kia Rio was not too steady on the narrow, dusty and washboarded road. The little round pebbles didn’t improve traction any, either!

Much of the road also is only one lane wide, carved from the red clay cliffs along the Chama River, with no barrier on the riverside edge. There were occasional turnouts to allow opposing traffic to pass, but I discovered that guys in SUVs seldom wait at a turnout. Yes, there was traffic that had to pass. 12 miles of the road is forest service access to recreation points along the river. Several times I had to squeeze by huge SUVs with kayaks or rafts lashed on top. On one particularly harrowing occasion our rear view mirrors nearly touched. And I was on the river side of the road!

Once I passed the last boat launch at mile 12, it was just me and the monastery ahead.

There is some proverb, I think, about the silence of the desert. (I’ve been blessed with the sounds of the desert; that old truism, if it exists, must refer to the absence of human voices and the clamor of culture.) If there is anything more silent than the desert it is a remote canyon in the desert.

Furthermore, the monks at this monastery have taken vows of silence. Even their own human voices are absent from their secluded existence. I didn’t meet any of them. The person at the gift shop (there is a gift shop, of course!) will talk to you (and sell you Christian paraphernalia; I resisted spending and getting any of it.) 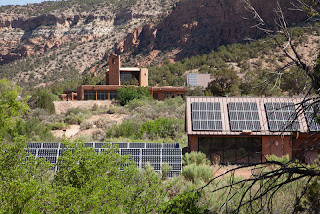 Seclusion is accompanied by self-sufficiency here. Solar technology allows the monastery to retreat from the grid as well as society. 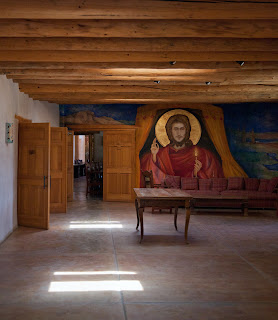 It was truly a peaceful place. The interior is dark and enclosed, like a cave or a kiva. The silence felt like a presence rather than an absence. Some, perhaps the reclusive monks, might name that presence. I was content to feel it for a brief interlude. 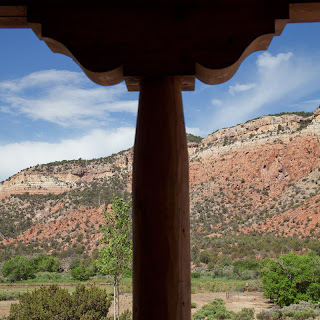