The bus crunched to a stop on the gravel road. Our guide gestured towards a low, multicolored clay hill that hunched in front of the iconic cliff formations of Ghost Ranch. Fifteen heads craned to look out the right side windows. “These are what O’Keeffe called “the lavender hills,” she told us. Then she held up a reproduction of a painting in a plastic sheet protector. O’Keeffe had titled it Cedar Tree with Lavender Hills.

The painting depicted a leafless, twisted, tapering gray trunk, tilted at an angle that bisected the rectangular composition diagonally. The guide pointed again, this time to a thin, dark shape canted at the same angle as the trunk in the painting. “There’s the tree,” she said. There was a collective gasp as everyone simultaneously registered the exact shape that O’Keeffe had faithfully rendered in oil paint.

“She painted that tree in 1937,” the guide continued, “and it’s still there.” She explained that cedar wood doesn’t decay; it gradually, very slowly, erodes, like the lavender hills. Consequently, there it was, 76 years later, for us to see.

At the next stop we were allowed to get out of the bus (but be very careful to stay on the gravel path, we were told: “the land here is extremely fragile.”) Cameras ready, everyone eagerly spilled out and lined up along the gravel edge. This time the guide held up a reproduction of a painting entitled Hill, New Mexico. “Look over my shoulder,” she said. “There’s the hill, just as she painted it.  If you look closely you can see that even the trees are in the same positions. She was painting what she was seeing.” Cameras began snapping and iPhones clicking. 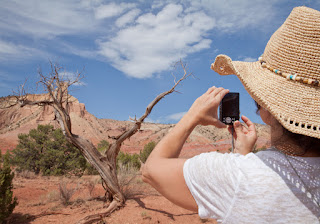 We were on the official “O’Keeffe Landscape Tour.” Its purpose was to visit the exact locations where Georgia O’Keeffe had made some of her famous paintings on Ghost Ranch, the place where she lived from 1936 until shortly before she died in 1986.

It is a place that also has been familiar to me for a very long time. When I first visited Ghost Ranch I was too young to know who Georgia O’Keeffe was. The ranch was and is owned and operated by the Presbyterian Church. My father, a Presbyterian minister, brought the family there several times. I grew to love the ranch logo, along with the place itself, long before I knew that O’Keeffe had drawn its now famous skull.

Eventually, the connection between O’Keeffe and Ghost Ranch became evident, of course. I developed a particular fondness for her paintings, so many of which were clearly done in places that I could identify.

My own connection to both the ranch and O’Keeffe expanded enormously when I was in college. I spent a memorable three months at Ghost Ranch working on their college summer staff. One of the (very) special things we got to do was to tour O’Keeffe’s adobe house. Back then O’Keeffe was still using the house, but she was not there at the time. In fact, because she was such a famously private person, ranch personnel took pains to respect her privacy. The public was not even told where her house was located. 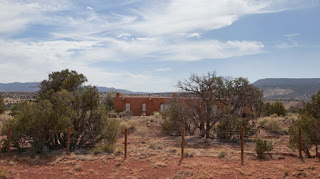 Not so today! The bus rolls to another stop next to a gate in the palisade fence surrounding that very house. Through the gate we were able to glimpse the characteristically low, adobe structure (which looks like innumerable such houses in northern New Mexico!) The house is still not open to the public. (O’Keeffe owned a second, winter, house in the nearby town of Abiquiu. That house has been open for tours for many years.)

The “O’Keeffe Landscape Tour” was begun eight years ago. It runs eight times a week year round. Our 15-passenger bus was filled to capacity, as it often is throughout the summer. In short, Georgia O’Keeffe means big business for Ghost Ranch.

Although I’d been revisiting the ranch off and on over the years, this is a new development. In retrospect, however, the surprise is that it took so long. Posters and notecards of her paintings and books about O’Keeffe have always been available in the gift shop. The tour seems a logical way to capitalize on the interest in one of our nation’s most famous and beloved artists that shows no signs of waning. 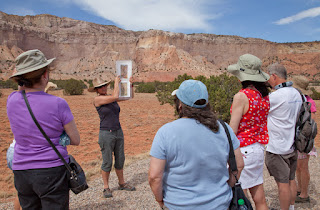 Still, it feels a bit quirky to me. We pile out of the bus for the last time. The now familiar routine is repeated. This time the guide brandishes two versions of paintings O’Keeffe made of the cliff face that we could see over her shoulder. She gamely tries to hold the two sheets aloft in the stiff breeze. Then, in a variation on a theme, she suggests that people pose in front of the scene, O’Keeffe’s subject, while holding the print of O’Keeffe’s painting. I wonder if I’ve wandered onto the set of a reality TV show by mistake. 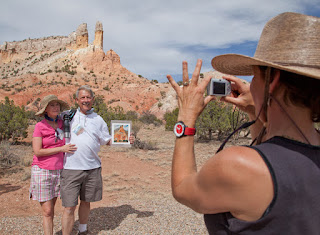 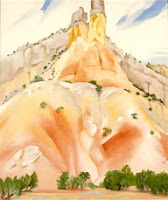 I’ve no call to complain. The exclusivity of that long-ago visit inside her home—a memory I freely admit recounting whenever the occasion permits—is intact. And at one of the bus stops on the tour we stood before one of the dramatic chimney rock formations that everyone who visits—or even drives by—Ghost Ranch can’t help but see. These are the cliffs, visible up close from O’Keeffe’s patio, that she called her “backyard.” The guide held up a reproduction of The Cliff Chimneys, as I expected she would. The original of this painting is owned by the Milwaukee Art Museum and it is a rare visit to the museum when I don’t pay homage to it. 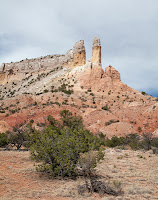 Here's my shot of those cliffs. We were not quite in the same position as she or they would look more remarkably similar.

Below are a few more shots from the tour. I posted a related story, about O'Keeffe's favorite mountain, Pedernal, on Urban Wilderness.

To see additional photos from Ghost Ranch (unrelated to the tour), go to my flickr set. 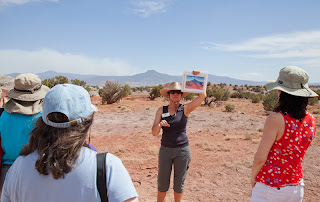 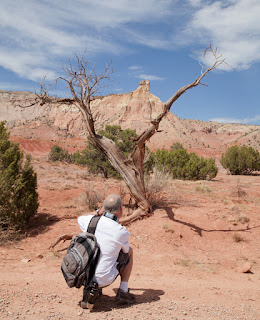 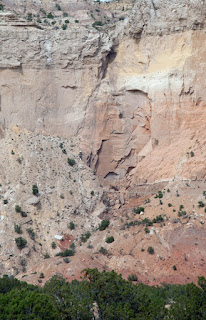 Full disclosure: In addition to having a long association with and appreciation for Ghost Ranch, I have been invited for the first time to teach a photography class there in the fall. I gladly confess I'm not an objective observer.

Addendum: A friend replied to me by email with a story of her own and gave me permission to reprint it here:

"About 6 or 7 yrs.ago my husband gifted me with the Ghost Ranch bus tour, which I relished. After the tour, we ventured to Abiquiu. When I could not resist touching the stone wall surrounding O'Keefe's house in Abiquiu, I was greeted by an unhappy guard from within the wall with a rifle pointed in my direction. Having ignored the no trespassing sign on the wall, I had to depart in a mad dash flurry with my husband yelling for me to hurry back to the car as if my life might depend upon the rate of my haste. We jetted out onto the highway. Thanks for reminding me of this wonderful adventure!"  Susan