Christo accused of being an “eco-terrorist”

Christo is famous for wrapping both landmarks and landscapes with immense amounts of fabric. His most recent project was the widely celebrated “Gates,” for which he erected 7,500 gate-like structures draped with saffron colored curtains in Central Park, New York City in 2005. His current project, if allowed to proceed, will cover 42 miles of the Arkansas River in Colorado with a fabric “roof,” as illustrated in the design collages below. He calls it “Over the River.” 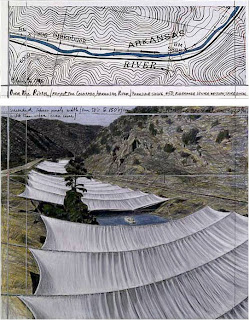 Christo doesn’t take the “if allowed to proceed” caveat lightly. In fact, much of the years of time and effort that goes into his monumental and temporary works of art are devoted to obtaining the necessary official permissions and convincing a skeptical, sometimes hostile, public that it should be allowed to proceed. Yesterday the Wall Street Journal published a story entitled “Christo vs. Colorado” about the controversy and economic implications of this project. I won’t repeat the whole story, since I’m hoping you’ll click on the link and read it for yourself.

Christo’s work is always controversial for a variety of reasons that range from politics to concerns for the environment. I find it remarkable that, aside from its staggering cost—the “Gates,” which had a two-week duration, cost $21 million—the value of the work as art is less often called into question than how much disruption it will cause. That is the case in Colorado, where, according to the article, some of the most vocal opponents live in the town of Cotopaxi (pop. 3,220) where they have a single two-lane road going in and out of town and object to the prospect of two weeks of traffic jams caused by the tourists (estimates range up to 300, 000) who will flock to the region.

In what seems to be a particularly egregious example of the hyperbolic and vitriolic extremes typical of what passes for public discourse in the U.S. today, an opposition group calling itself “Rags Over the Arkansas River” has labeled Christo an eco-terrorist. (Exhaustive environmental impact studies, along with negotiations with all sorts of regulatory agencies, are standard to his planning.)

If you are a regular reader of Arts Without Borders you may have noted that the Wall Street Journal is not my usual source of news. Someone who knows my interest in art passed it on to me. I found the article fascinating as much for what it didn’t cover as what it did. It’s a thorough and interesting account of the planning, logistics, financial considerations, and (of course) controversies that surround Christo’s work. But, except for some brief quotes by the artist himself, the reporter never describes the aesthetics of the work or offers any kind of critique of it as art. (I guess I won’t pick up a subscription.)

The article says that this “may be his last major project.” Christo is 75 and recently lost his wife and collaborator, Jeanne-Claude. That and the long time it takes to accomplish his projects make it seem likely, unfortunately. If the residents of Cotopaxi relent, the project is expected to be erected in 2013, so hold off on reserving your tickets to Colorado. 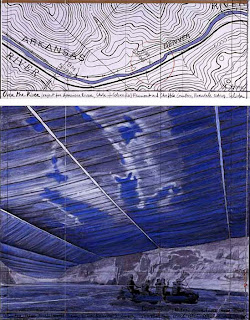