Kudos to Joe Hanreddy and the Milwaukee Rep

I hope you’ve already seen “Seven Keys to Slaughter Peak,” the hilarious comedy that closes the curtain on Joe Hanreddy’s 17-year stint at the helm of the Milwaukee Rep. There is a definite downside to having season tickets to the rep that are scheduled for the last day of each production. If I write about a play I’ve just seen, I can never encourage anyone to go see it!

Judging from the packed house last night though, plenty of people had gotten the word. I’ve been to all of this season’s plays and I haven’t seen such a full house. That’s tribute to the appropriateness of this play as a swan song. The script, originally by the powerhouse George M. Cohan, was freely adapted by Hanreddy not only to update its humor but to speak to his hometown audience. It worked brilliantly, with loads of subtle – as well as completely un-subtle – inside jokes about Wisconsin. It also showcased the talents of the resident acting company, who were spot on. By the time its twisted double (maybe there were three?) endings concluded I realized two important things: I for one (as well as my wife and the people we were with) had been completely taken for a ride and it was a delightful ride indeed.

I have been one of the anonymous audience members, off and on, for much of Hanreddy’s tenure. For what it’s worth, I add my salute to all the well-earned kudo’s he’s been receiving.

I wish there had been the same crowds at the rep’s last play, “The Seafarer,” which I thought was the best of the season and one of the best I’ve seen. In fact, in between that play and last night’s I had the opportunity to go to New York. While there I saw a play on Broadway (“A Behanding in Spokane” – feel free to ask about that!) The star of that show was truly a star: Christopher Walken. I enjoyed the show, and Walken lived up to his reputation. But, in my opinion, it doesn’t diminish Walken’s stature to say that I don’t think the Broadway theater experience was in any way superior to the Milwaukee theater experiences I feel privileged to have had. (It was certainly more expensive though!)

Milwaukee. Let’s appreciate what we have. Thanks, Joe Hanreddy and company! 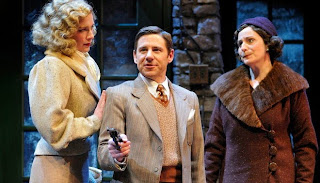 If you want more information about "Seven Keys to Slaughter Peak," here is a link to the Milwaukee Journal Sentinel's review.
Posted by eddee at 6:22 PM