Milwaukee's gallery night does not disappoint

After several hours of gallery hopping my friend Karen exclaimed that it was "exhilarating." I agree. The art varied considerably, as expected - as it should! But overall it did not disappoint. Creativity lives in Milwaukee!

Before I describe a few highlights, what did disappoint, now and then, was the result of gallery night's success: the mobs were so thick in places that we found ourselves squeezed into overtaxed elevators and following, single file, long lines of slow moving crowds down narrow flights of stairs and through hallways. Claustrophobia threatened to quelch the exhilaration. At times I found myself thinking that this is no way to see art. Then (about every ten feet it seemed) I would run into a friend or acquaintance and it would feel great again. (Last night was particularly rich in these experiences. In one evening I ran into, not only dozens of people I've known varying lengths of time, but a statistically remarkable number of the people I first met when I moved to Milwaukee over 30 years ago, some of whom I see infrequently at best.) Ya gotta love arts - and arts events - that bring people together!

I saw too much good art to comment on even a significant fraction. I'll be very selective and choose the highlights: 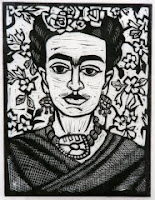 The stylized but highly expressive portraits of artists and writers by Carri Skoczek at the  Portrait Society Gallery were stunning. Several times during the evening I found myself coveting some work of art or another, but here the temptation was strongest. This piece of Frida Kahlo was up for silent auction, so I made a bid. (I didn't stay late enough to find out if I was overbid.) It wasn't my favorite piece, either. In fact, this ranked as the strongest, most cohesive body of work I saw all evening. It would be hard to pick a best from the lot. Fred Bell's diminutive paintings of similar subjects were also lovely, especially his endearing take on Emily Dickinson (which, unsurprisingly, had a red sticker next to it early in the evening.)

The other major highligh, as usual, was the MIAD senior thesis show. There were many strong portfolios in all of the varied disciplines taught at the school. We got there late and couldn't see it all. A few personal favorites from my random wanderings:

Just inside the front door I was immediately drawn to Anna Maund's bold photographic portraits of cabbages that emerge out of inky blackness and then to Mary Sievert's illustrations. Upstairs, Sara Patzke's sensitive and evocative bone drawings reminded me of the less refined renderings of the same subject I did when I was her age. Jillian Duckwitz managed to convey what I imagine the chaos of an insect's perspective could be by layering silkscreen prints onto sheets of plexiglas. Beata Krezalek created a powerful statement with her floor to ceiling installation of mostly drawings depicting tangled nude bodies. The lyrical line drawings were strongly punctuated by a sculptural component of hanging fabric sacks that could be taken for a flowing cave formation, but which in context look more like a grotesque collection of human scrota. A strong contingent of young photographers included Maggie Salvine, with collages of landscapes in urban park settings (which anyone who knows my work might recognize as appealing to my interest in "urban wilderness"); Theresa'Beth Whitfield's compelling images of ordinary interiors with scratched narratives suggesting impending violence that used slashed surfaces to express in no uncertain terms the outcome of the narratives; and Justin Bacon's delightful series that transports us from a traditional religious setting in a church interior to a sublime spiritual awakening in a jungle setting awash with light.

But my (ArtsWithoutBorders!) vote for best of show is unequivocal: Sarah Omen turned her artwork into a plea and, more important, a practical interactive project, for the audience to engage in productive change to help the environment. She calls it Project E.A.R.T.H.: Environmental Activism Reaching Toward Humanity. Her exhibit of colorful mixed media collages gradually disappeared from the wall as the audience traded a commitment to do something good for the earth in exchange for one of her pieces. Signed commitment cards replaced the work on the walls, mine among them.

Art that makes a difference is something I can live with.
Posted by eddee at 7:28 AM