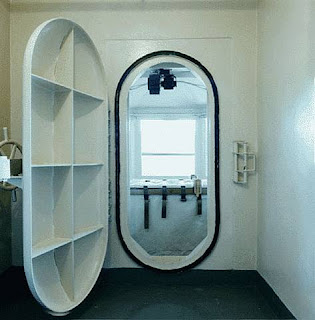 Photo by Lucinda Devlin
Last night Barbara Rose, a prominent art critic, gave a talk at Marquette University in Milwaukee about the exhibit called Omega Suites by Lucinda Devlin. The exhibit is on display at the Haggerty Museum of Art. This is one of the pieces in the exhibit.
I think it is an excellent body of work and a lovely exhibit.
Rose gave a nice overview of Devlin's previous work and a brief intro to her next series. She also provided examples of other works of art to give Devlin's some cultural and historical context. Overall I'd give the talk a thumbs up.
However, in my opinion, Rose's worthwhile examination of the Omega Suites and Devlin's oeuvre was nearly overshadowed by an offhand comment she made early on. She said that "photojournalism is not art." During the public question and answer period that followed Rose was queried by several people in the audience about this comment. She not only held her opinion, but dug in her heels and reiterated it emphatically.
There is no doubt that the intentions of photojournalism are different than those of a fine art photographer like Devlin, who makes no claim to be a photojournalist. There is also no doubt in my mind that the practice of photojournalism takes place under completely different circumstances than fine art photography and their respective values reflect the circumstances.
However, it is disingenuous, I feel, to make the global claim that photojournalism is not art.
It is a fortunate coincidence that I attended this lecture and heard this comment at the moment of my inaugural post on this new blog. Arts Without Borders will be my effort to comment on my experiences and gleanings from the world of arts, letters, sciences, and, well, the world in general. I don't see such a clear distinction between art and photojournalism, to use the current example.
If photojournalists are doing their job, they are not trying to make art as would Lucinda Devlin or Andy Warhol (to use another artist mentioned in the lecture). But it is fairly easy to point to examples of photography that were originally done for journalistic purposes that are now considered masterpieces and collected as works of art. Indeed, Street Seen, the current show at the Milwaukee Art Museum includes such examples as Robert Capa's famous scenes from DDay.
Art exists on a continuum of creative endeavors. Categorical statements like "photojournalism is not art" will be challenged in this forum, for I don't believe it is either true or helpful to make such an assertion. 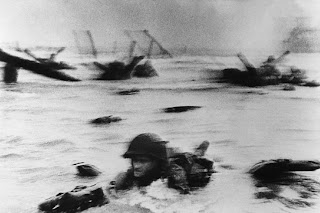